We suspect that among the reasons that station wagons don’t sell that well in the U.S. is because they are usually so boring! Now I know Volvo, BMW and others have made attempts to counter that in the past. And, now there is another marque trying to change perception. It’s Jaguar with their anything but boring XF Sportbrake! It’s crossover-like utility in a gorgeous package. Now let’s see how it performs.

To find out how we arrived at this 2018 Jaguar XF Sportbrake, we have to go back to the mid-20th century. At that time, station wagons were the family vehicle of choice. But, in the 1980’s, wagons gave way to minivans, which gave way to SUVs in the 1990’s, followed by crossovers in this century.

While all of this was happening here in the U.S., European families were making due with wagons and hatchbacks the whole time. But, the Jaguar XF Sportbrake is much more than just “make due”.

Our “look at me” red test car is one slick-looking 5-door, you might even call it sexy; sitting atop the 2nd gen XF chassis. And while Jaguar didn’t make the last gen Sportbrake available here in the states, this generation XF wagon was designed with an eye towards the U.S. market from the get-go. 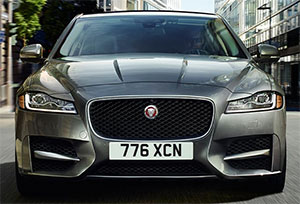 Jaguar thinks there are now enough high rollers here who want the space of a four-season crossover without the utility “baggage” as it were.

So accordingly, it comes in S trim only; which means a supercharged V6 engine with all-wheel-drive, sport body kit, self-leveling air suspension, and 20-inch wheels, they’re all standard, no penny-pinchers need apply.

Most measurements are the same as the XF sedan, but Jag has done fairly extensive work; taking weight out where it can to minimize any gains from the full-length roof, complete with standard roof rails and a large glass panel.

The storage area is, of course, different, 31.7 cubic-ft., over 50% larger than the sedan’s trunk space, and just a couple of cubic-ft. shy of their F-Pace midsize crossover; max cargo with seats folded is 69.7 cubic-ft.

Much like the sedan, the Sportbrake could use a nicer interior. Things appear fairly plain for a luxury car; and while we’ve finally gotten Jag’s Touch Pro multimedia system mostly figured out, it’s far from our favorite system. 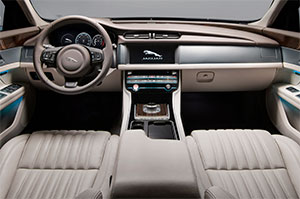 By now, we’re very familiar with the 3.0-liter supercharged V6 that powers the Sportbrake. And it feels like a monster as always, whipping up the same 380-horsepower and 332 lb.-ft. of torque here as it does in the F-Pace.

It’s a great engine indeed, working in conjunction with a ZF 8-speed automatic.

Both brought the goods home at our test track, as there was a strong launch with great traction off the line. We hit 60 in 5.3-seconds.

Power builds quickly and steadily as the RPMs climb, but it seems to save a little bit extra, for when you get to the upper registers. Shifts are firm and direct without being jarring. The ¼-mile was completed in 13.8-seconds at 100 miles-per-hour.

When it comes to handling, the Sportbrake is solid, capable, and willing the way that few crossovers can be. It’s not that it’s a lightweight, coming in right around 2-tons; but it sure doesn’t feel that heavy, weaving in and out of the cones with very minor understeer. It’s just a pleasurable experience that’s more akin to a sport sedan, with a low center of gravity, all-wheel-drive grip, and great responsiveness to your inputs. 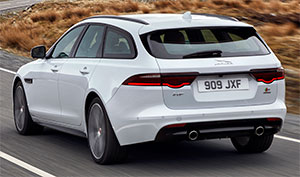 We even had a chance to drive our Sportbrake through some substantial winter weather, and found it ridiculously good in snow; as we were driving near posted speed limits on snow-covered roads without any issues.

Government Fuel Economy Ratings are 18-City, 25-Highway, and 21-Combined, so we were quite pleased with a 24.0 miles-per-gallon average on Premium. Just slightly below average for the Energy Impact Score, at 15.7-barrels of oil burned and 7.1-tons of CO2 emitted annually.

Base pricing of $71,445, firmly puts it into the premium category, versus the mainstream family utility.

And since Jaguar doesn’t exactly sell a whole lot of XF sedans, a wagon version is not likely to set any sales records either. However, a highly satisfying, right-sized, premium, cargo-hauling piece of luxury, that helps you remember the joy of driving, and truly feels like something special; well now, they might have something there. And that something is the 2018 Jaguar XF Sportbrake.