By just about any measure, the Jeep Grand Cherokee is one of the most capable of all utilities. But there’s never been a Grand Cherokee quite like the Trackhawk. Think of it as the Challenger Hellcat’s outdoorsy uncle. You know, the one with Army Ranger skills that everyone’s a little bit afraid of. Get the picture? Well maybe this will help.

It’s the answer to the question, “what happens when you stuff a Hellcat engine into one of the most-in-demand SUVs of all time.”

And if you don’t know what a Hellcat engine is, allow us to introduce you to 707-horsepower of HEMI awesomeness, from a 6.2-liter supercharged V8 engine that spins up 645 lb-ft. of torque. 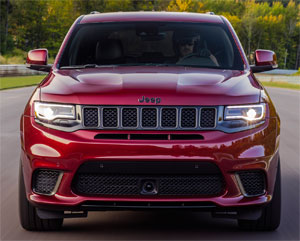 Yes, that’s a lot of power; and yes it does move this GC around like its 5,300-lbs are not subjected to earth’s normal laws of gravity.

Indeed, straight-line is where it’s at for this 4X4. After dialing the launch control to 1,900 RPM; we just let the GC monitor power, as we just floored it, released the brake, and held on; hitting 60 in 3.5-seconds on our first try.

There’s plenty of traction for making that leap, planting you firmly into the seat. And with Torque Reserve constantly feeding more and more power in; that feeling never lets up until you back off the throttle.

On the road, there’s plenty of typical Grand Cherokee comfort, but with pleasant sounds of Hellcat creeping in; though supercharger whine seems more subdued here than in the Challenger and Charger. Plus, it can trailer tow a hefty 7,200 pounds.

It’s not the softest of highway rides, as the suspension has been stiffened, and wheels are 20’s.

Of course the transmission, an 8–speed automatic, as well as all driveline components have been beefed up to handle the middle-management stress of delivering that much power to the pavement. 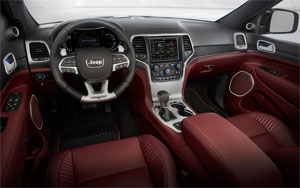 With distinctive yellow calipers, the Brembo brakes are bigger than those on Hellcat cars, and do a tremendous job of quickly stopping this beast.

All-wheel-drive management deploys power differently, whether you’re accelerating in a straight-line or towing; even defaulting to rear bias in Track mode for road course work. And yes, you can haul this thing around a race track, which we did at New Hampshire’s Club Motorsports.

Clicking the steering wheel–mounted paddles shifters results in immediate gear changes; and all of that power from under the hood, basically negated all of this track’s elevation changes.

It does take a while to feel truly comfortable stuffing a heavy SUV into a corner; but once you get used to it, the Trackhawk is great fun; not quite a Porsche Cayenne, as it could use more steering feel, but way more than you expect from a vehicle that in its heart wants to be off pavement more than clinging to it at high speeds.

There’s very little roll; and while it’s fairly responsive to inputs, planning ahead and keeping those inputs smooth will give you the best results; as stability control will still cut in even in Track mode. 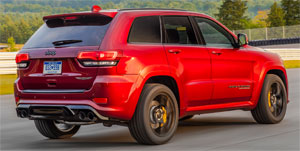 Updates to the front end allow more air to come in, and there’s more going out as well…

GREG CARLOSS: “There’s also a quad exhaust system out back. There’s a bit of refinement to it. It’s not as brutal and aggressive as the Charger and Challenger, but still really nice. You get a lot of sound there (engine growls). Bang the throttle (engine growls) I mean it’s everything you want maybe just a little bit more refined than those other cars”

JOHN DAVIS: Things are dressed up inside, but it’s not as if build quality has been supercharged as well. There’s a nice, thick steering wheel, and great seats.

Bearing the double burden of being an SUV and a performance machine, Government Fuel Economy Ratings are pretty dismal at 11-City, 17-Highway, and only 13-Combined.

Still, no matter how bad-to-the bone it is, at the end of the day, it remains a Grand Cherokee, and a pricy one at that; $86,995. However, something comparable from Europe would require a 6-figure investment.

So whether you look at the 2018 Jeep Grand Cherokee Trackhawk as a family truckster built for track days, or a performance car that you can haul with; it’s a far-out piece of performance machinery, made with a formula that Fiat-Chrysler seems to have perfected.