It’s hard to find a more loyal fan base in the car world these days, than devotees of the Jeep Wrangler. It’s impossible to drive one anywhere without getting waves from the brotherhood. So, no surprise, we’ve been hearing rumors, and seeing renderings and spy shots of an all-new JL generation for years. Well, finally, it’s time for the real deal.

All-new Jeep Wranglers are indeed a rare thing, happening only every 10-years or so since it debuted for 1987. But, 2018 sees a host of changes like never before, starting with the powertrains.

Even more intriguing is a 3.0-liter turbo diesel V6 with 260–horsepower and a whopping 442 lb-ft. of torque, but we’ll have to wait a bit longer for that one, and even longer still for the announced plug-in hybrid.

On the other hand, the tried and true base 3.6-liter Pentastar gas V6 carries over mostly unchanged, save for gaining automatic stop/start. Horsepower and torque remain at 285 and 260. 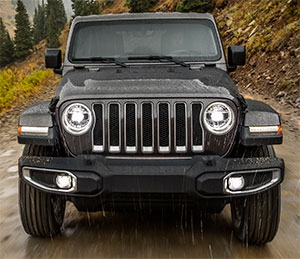 Standard transmission is now a 6-speed manual, with the optional automatic an 8-speed. Unfortunately, as of right now, you can only get the manual with the 3.6 V6.

FCA is smart enough not to monkey around with the exterior too much, having learned a valuable lesson from the relaunched Cherokee. All of the hallmarks are here, including round headlights, square, tacked-on tail lights, fold down windshield, and of course a 7-slot grille.

New elements are mostly limited to a lower beltline for better visibility, body-colored sport bars, easier to use rear door handles, and LED lighting…including for the headlights on Sahara and Rubicon models. Headlights now creep into the grille ala CJs of old.

And while many questioned the adding of rear doors into the mix for 2007, it didn’t take long for the 4-door Wrangler to outsell the traditional 2-door.

So it goes without saying both are back, with a choice of tops that includes an improved version of the traditional soft top, two different hard tops, and a new Sky One-Touch power top.

The standard soft top is much easier to use, with sliding retainers for the rear windows and additional structure within’ the fabric. 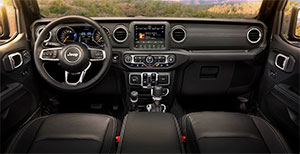 Those more into the hardware side of things, will find both Command-Trac and Rock-Trac 4-wheel-drive systems, Dana axles, a 2-speed transfer case, front and rear lockers, winch-ready bumpers with removable end-caps, and 33-inch tires, all available.

We spent most of our time in a 4-door Sahara hardtop with the Pentastar and automatic.

The V6 remains plenty powerful; and while it has been refined a little over the years, there’s still a rough edge to it that’s very befitting of the Jeep’s nature. Unlike in the rest of the FCA lineup, the 8-speed automatic seemed well sorted out here; with less hunting around.

As you may have expected, or at least hoped, things have gotten a little quieter in the cabin, and the ride smoothed a bit. More impressive was Jeep tightening up the turning radius. Should do wonders on the trail, or more likely just well-paved parking lots.

Tackling some rocky desert terrain near Tucson, Arizona, we of course opted for a Rubicon. But under the watchful eyes of FCA, we didn’t get a chance to find anything close to the limits of its off-road abilities. 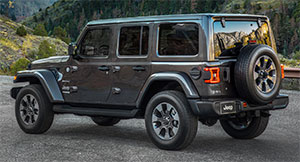 We did spend a little time with the turbo Wrangler, as well. Low end torque was quite impressive, but things certainly felt a little weaker on the high end.

Inside is where maybe we were less thrilled with the new design. No doubt, it’s much cleaner and the look more upscale; but you have to get past Jeep’s recent thirst for including plenty of gimmicks throughout. We do give Jeep props for keeping the majority of the controls unique.

Materials and switchgear are very rugged feeling, and most seem ready to stand the test of time; with some of the exposed fastener look still in place. Seat comfort remains just okay, but rear seat space is quite good. 3-different sized U-Connect screens are available.

We’re sure that CJ and TJ snobs will find something to hate in the 2018 Jeep Wrangler, but we sure couldn’t. It’s all of the Wrangler we’ve always loved and more, with modern powertrains that should easily power it into the future. And what’s not to love about that?