We’ve grown quite attached to the Kia Niro hybrid during the 11 months it’s been in our long term test fleet. We’re averaging almost 43 miles per gallon in this roomy 5-door urban ute. So, we were glad to see when it’s bigger batteried plug-in brother finally arrived. So time now to see if more EV range jolts our opinion of the Kia Niro.

The Kia Niro Hybrid arrived for 2017, on the brand’s first dedicated hybrid platform. So, the logical next step was of course, this 2018 Niro Hybrid PHEV version.

Adding a bigger 8.9-kWh battery pack to Kia’s Urban Crossover Hybrid provides a 26-mile EV-only range; pretty typical for recent plug-in hybrids. So, if you have a short commute, you may only have to burn gas on weekend adventures.

And like most of the PHEV breed, it feels quick and smooth off the line. Like our long term Niro, it does fumble a bit as it searches for the appropriate power source, as well as the proper gear from the 6–speed dual-clutch automatic. At least it’s not a CVT. 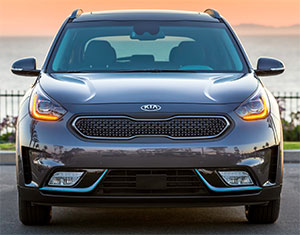 Ever since the Toyota Prius rose to the top of the hybrid heap, multiple brands have attempted to chip away at their dominance. Granted, lower fuel prices have held them back; but since the Niro Hybrid became available last year, sales have been quite good.

At about 3,400-lbs., some 200 more for the extra hardware; the Niro PHEV does lose some of the base hybrid’s nimbleness. Still, steering is quite nice; with turn-ins that are quick, without the over-boosted feel of many small crossovers. That heaviness also gives it a very sold feel.

Again like our Niro Hybrid long termer, brake pedal feel is very natural for a regen system; but you do have to put your foot into it sometimes.

There’s a high quality look and inviting nature to the interior, as well as plenty of soft materials and above average seat comfort; putting it perhaps a small step up from the Toyota Prius. 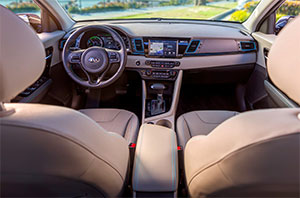 Room inside is characteristic of the small crossovers that the Niro competes with; not plentiful, but adequate. Yet the wagon-like shape of the Niro, makes getting in and out, as well loading the cargo area, very easy.

You’ll be able to pack 19.4 cubic-ft. worth of stuff back there, and if you need more space, folding the rear seats will get you 54.5 cubic-ft. Both numbers unchanged from the regular Niro, as underfloor space for the larger battery was planned for in the original design.

Of course getting fuel economy in the mid-40s is certainly not common in the crossover segment. And Government Fuel Economy Ratings here are 46-Combined, or 105-Combined MPGe. Our average for this PHEV is right on at 46.0 miles-per-gallon of Regular, and better than the 42.9 miles-per-gallon we’re currently averaging in our long-term, non-plug in Niro.

There’s a great Energy Impact Score, with use of just 3.4-barrels of oil annually, with CO2 emissions of 1.5-tons.

While already having the advantage of being a better looking vehicle than the Prius, we love the subtle blue clues that have been added to separate this plug-in from the original Niro Hybrid. They seem to be just about everywhere, yet they’re not in your face screaming that it is a PHEV. 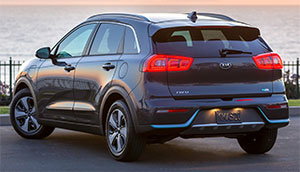 In addition, the grille is slightly modified, and of course there’s now a charge port in the front fender on the driver’s side. Charge time on 240-volts is about 2½ hours; closer to 9 with the standard outlet 120.

The Plug-in sticks with mid-level Niro trims, so no base FE or Touring Plug-ins are available. Thus, pricing starts with the LX at $28,840; about $4200 more than the non-plug in, and tops out with EX Premium at $35,440. For some, tax incentives may more than cover the upgrade.

As with most plug-ins, the more time you are able take advantage of EV power, the more they make sense. If you have a fairly short commute or can plug in often, then the 2018 Kia Niro PHEV is worth the extra money. But, if you mainly drive longer distances or don’t have the opportunity to frequently charge the battery, then you’re better off sticking with the traditional Niro Hybrid, which itself is quite a fine vehicle. Plus, there’s a full EV Niro with over 200-miles of range coming very soon.

Bottom line, Kia continues to expand their portfolio to include more fuel efficient options. And that’s certainly a win for us, and Kia.