When it comes to subcompact cars, there are plenty to choose from. And while most are clearly aimed at the entry-level buyer, Kia is taking a different approach with their Rio sedan and hatchback. They’ve given it a much more “mature” design; hoping to both attract those looking to downsize, as well as over deliver on what the typical first time car buyer expects. So let’s see if it’s a good strategy.

Let’s be serious, every carmaker wants their vehicle to appeal to as many people as possible; it is all about selling cars, you know. But, Kia is really taking that to heart with the 2018 Rio.

And while many subcompacts try to attract attention with unique shapes or splashy designs and colors; the Rio takes a more adult turn, leaning closer towards European starter cars, than their traditional Asian counterparts. Which makes sense, as the Rio is a very popular car throughout Europa already.

For us, it’s still available as both a sedan, and a 5-door hatchback like our test car. Both are undeniably classier looking; taller, sharper, and better proportioned as well. 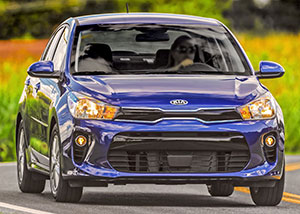 Both also ride on the same 101.6-inch wheelbase which is just slightly longer than before…

…and share the same 1.6-liter I4, which has been slightly retuned. Numbers are down a bit, from 138-horsepower to 130; and from 123 lb-ft. of torque to 119. But, that’s still good for the segment; and peak torque arrives sooner, which helps hide the decreases.

As before, a 6-speed manual transmission is standard, though it is available only in the base LX model. All other trims come with a 6-speed automatic.

But this new Rio did manage to shave a tenth off of the ¼-mile, taking 16.8-seconds, and finishing one mile-per-hour quicker at 84 miles-per-hour.

We praised its fun-to-drive spirit then, and it still shines through now. Understeer is predictable and gradual as it is playful; with very good feel through the wheel. 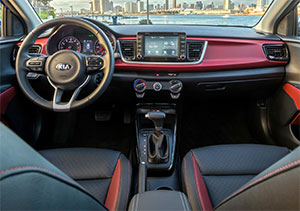 It stays very stable, even at higher speeds, and will let you push fairly hard before complaining.

Brakes are vastly improved. At 110-feet, the average stopping distance from 60 is 20-feet shorter than before. Response and feel are also much better too, all fitting for any car with Euro-style aspirations.

The spry chassis feel is noticeable when out and about as well; but the engine can get a little buzzy, and the transmission can be a little slow on the downshift when you want more power coming out of a corner.

Compared to the many bare-bones cars that still populate the subcompact ranks, the Rio’s interior is truly a notch above.

The dash features a highly sculpted design, with the center touchscreen floating out of it. There’s not much a traditional center stack, just a cluster of climate controls clinging to the bottom of the dash.

A wealth of controls are on the steering wheel; and behind it, a simplistic looking but comprehensive gauge panel. 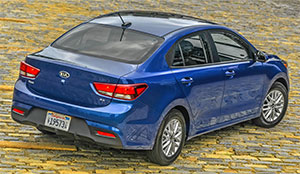 As far as interactions with the car, the seats are sufficiently comfortable, and the multimedia screen very responsive and logical.

Lift-over is a little high for accessing the cargo bay, but the space is well-finished and there’s a decent amount of it; 17.4 cubic-ft. seats up, 32.8 seats down.

Government Fuel Economy Ratings are 28-City, 37-Highway, and 32-Combined.  We averaged a very fine 33.0 miles-per-gallon on Regular. That makes for a very good Energy Impact Score, burning 10.3-barrels of oil yearly with 4.6-tons of CO2 emissions.

We’ve often praised larger Kia sedans for their European inspired tuning and execution. Now, that can also be said of the entry level Rio. It was a fine subcompact before, and it really stands out from its rivals now. The 2018 Kia Rio is indeed a very sophisticated design, that like the brand itself, has matured quickly.