AMG’s GT arrived for 2016, following the highly-regarded SLS supercar. It was actually the higher performing S version that we got our hands on first; and since then, it was followed by a Roadster as well as an even higher-performance GT C.

This 2018 GT R is their most serious effort yet, aimed at enthusiasts who plan on spending more days at the track than touring the countryside. And don’t think of it so much as a cranked up S or C, it’s more like GT 2.0, with a full systems reboot.

Wrapped around those brakes are lightweight forged wheels; 19-inch in front, 20 in the rear with 325-series Michelin Pilot Sport Cup 2 tires.

And, from there, the engineers had a chance to really step out. Carbon-fiber fenders cover those wheel-and-tire packages, and are 1.8-inches wider in front, 2.3 in back. 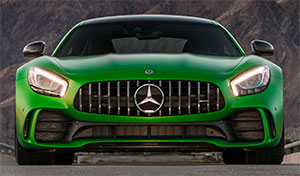 The front-mid-engine layout keeps the profile long and low, with the proportions just right.

We were a little disappointed to see this Mars Red tester show up instead of the available “AMG Green Hell Mango” livery. But, that’s the exhibitionist in us talking.

A new grille up front is influenced by AMG’s GT3 race car, while the entire nose is more V-shaped. A broader front splitter, air curtains, cooling slits in the wheel liners, redesigned rear fascia, and large fixed wing are among the aerodynamic enhancements. That wing, as well the side mirrors can be constructed in carbon fiber if you so choose.

In addition, active aero elements behind the front fascia and underbody, funnel air for either max cooling or max downforce depending on the situation. All to make a supremely track-worthy Benz if there ever was one!

So, it’s off to the nine turns of Roebling Road Raceway to get the full scoop. 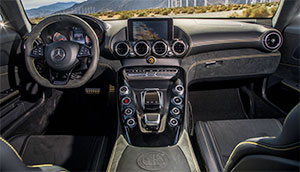 Much like music is more about flow than precision or technique, stitching corners together at a race track is more about rhythm than ultimate power delivery or spec sheets. And in the same way you can’t always describe why you like a particular song, the GT R just feels right on the track.

As mentioned, the aluminum front and rear double-wishbone coil-over suspension has been totally revamped, allowing for more adjustments; besides the normal AMG Dynamic Select drive modes.

In keeping up with the Porsches and Lamborghinis, AMG has also added rear-wheel steering for even quicker turn-ins. It also helps the rear to work with you more than against you when it comes time to powering out of corners.

AMG Traction Control has a whopping nine levels of intervention for finding the sweet spot for both your abilities as well as current track conditions.

And did we mention there’s more power? AMG has cranked up the boost in both of the turbos that are nestled in between this hand-assembled 4.0-liter V8’s cylinder banks, adding 74-more horsepower to 577. Peak torque is 516 lb-ft., and new dry sump lubrication keeps the oil pumping through its veins no matter how hard you’re cornering.

The rear-mounted 7-speed DCT gets revised gearing and a software update for quicker shifts, as well as additional cooling.

As for getting things done on the straight and narrow; engage Race Start, release the brake, and the car takes care of the rest; pushing a lucky owner to 60 in 3.6-seconds.

Keep the throttle buried, and amidst a symphony of V8 snorts, turbo-whine, and divine exhaust trumpeting; you’ll clear the ¼ in 11.5-seconds at 129 miles-per-hour.

One finds themselves pushed firmly into the AMG Performance seats the whole time, which also hold you just right when working your way around the whole track. By the way, colored seatbelts are an option.

There’s plenty of carbon fiber around the interior, and most controls mimic other GTs except for the new Traction Control knob.

Nurburging records never last for long. And enthusiast infatuation with performance cars is usually just as fickle. Still, if you’re looking to make your own personal Festival of Speed happen anytime or anywhere, the 2018 Mercedes-AMG GT R is already there. Mercedes claims it has the most motorsports technology that they’ve ever packed into a production street car. As of right now, it is the ultimate AMG GT Coupe, and one heck of a thrill ride!