Time now for two emerging trends to join forces. We’re talking about compact luxury SUVs, and plug-in hybrid powertrains. They’ve come together in the Mercedes-Benz GLC 350e. So let’s find out if these two great tastes, taste great together; or if it’s just the plug-in flavor of the month.

Mercedes-Benz has been slowly adding the PHEV treatment to vehicles throughout their lineup; the latest of which is this 2018 GLC 350e, their C-class based crossover. It all starts with the base GLC’s 2.0-liter I4 turbo, to which is added an 85kW electric motor. Both, filter their combined output of 320-horsepower and 413 lb-ft. of torque through a 7G-TRONIC 7-speed automatic transmission to all four wheels.

Other notable additions are a radar-based regen braking system; and a “haptic” accelerator pedal, which kind of fights against you, to make sure you get the best fuel economy. 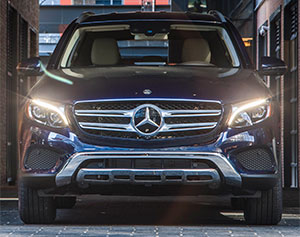 With a healthy 8.7kWh battery pack to store energy, we anticipated a fair amount of EV driving. But EV range is only listed as “less than ten”, and that’s about what we experienced. Fully depleted, battery charging takes only 2½-hours with level-2 240-volts. So, in daily operation it’s more like a traditional hybrid; but with a healthy boost of torque and enough battery power to get you from one end of town to the other without tailpipe emissions.

And like most recent plug-ins, drive modes allow you to select when and how much you want battery power to be involved. Now, you may not be able to drive it very far as a full EV, but it sure feels like one off the line.

At our test track, the 350e shot out of the hole briskly, with a diesel-like bottom end of glorious torque hitting 60 in 5.9-seconds.

The gas engine revs quickly, and the 7G-TRONIC transmission that replaces the GLC 300’s 9-speed auto, keeps right up. Timely shifts kept the engine in its sweet spot. 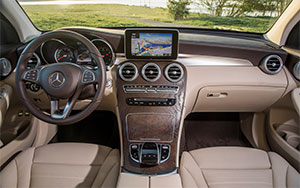 The ¼-mile took 14.5-seconds at 92 miles-per-hour. Thanks to a couple hundred pounds of extra weight mounted down low, and standard 4MATIC traction, grip through the cones was quite impressive. Weight transfer is subtle and refined; while steering is quick and light. It’s one solid and sophisticated-feeling utility.

Our average stopping distance from 60 was a good 127-feet. Regen brakes have a very natural feel; nice pedal pressure as well.

Plus, there is no compromise when it comes to expected Mercedes-Benz luxury. A 7-inch display screen with COMAND controller is standard, to which you can add navigation that will automatically decide when to most efficiently use battery power along your programmed route. And you’re not locked into one PHEV-spec model either, as the full suite of luxury and technology option packages are available. But like many plug-ins, the cargo area is compromised, due to the added batteries. But there’s still a decent amount of well-finished space. 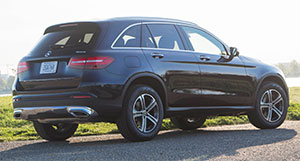 Not many eco indicators outside, as thankfully Mercedes chose classy over flashy. There is, of course, an extra access panel for the charge port. But like other Benz plug-ins, it’s located on the rear bumper. So, no cutting into a body panel, but it is also easily susceptible to rear end damage.

Government Fuel Economy Ratings are 25-Combined on Premium fuel, just one mpg better than a base GLC300; though the MPGe rating comes in at 56-Combined. We averaged 28.8 miles-per-gallon. Which is a better than average Energy Impact Score; 8.8-barrels of annual oil consumption, with yearly CO2 emissions of 3.9-tons.

With a starting price of $50,985, we’re sure that well-heeled environmentalists will think that the GLC 350e’s close to $8,000 premium over a base GLC 300 4MATIC is appropriate, but we’re not there yet. We fully understand the benefits of plugging in, but our practical altruism only goes so far. We need a lot more return on our investments than single digit EV range. But, we also realize that vehicles like this 2018 Mercedes-Benz GLC 350e are stepping stones in the automotive stream, as we slowly cross from petroleum-based power to battery-based propulsion. Some stones may be placed a little better than others, but all will be useful in getting us to the other side.