It was the best of times; it was the worst of times. Best, when we heard the rumor that Mitsubishi was bringing back the eclipse; worst, when we found out that wasn’t quite the case, as they’d be using that sporty name on yet another compact crossover. Let’s see if driving the new eclipse cross will put an end to our Dickensian dilemma.

Just when we weren’t too sure about what exactly was going on at Mitsubishi, now that they have aligned themselves with Nissan and Renault, we get word of this new compact crossover, the 2018 Eclipse Cross. Size-wise, it slides in between the Outlander and Outlander Sport in their lineup.

Much like the Honda CRV it would love to steal some sales from, the Eclipse Cross is tiny-turbo-powered with a 1.5-liter I4 rated at 152-horsepower, well short of the CR-Vs 190. There’s more torque, however; 184 lb-ft., compared to Honda’s 179.

Like the CR-V, the Eclipse Cross is CVT tranny only, and base ES trim is the only one available with front-wheel-drive. All other trims come with Mitsubishi’s Super All-Wheel Control all-wheel-drive. 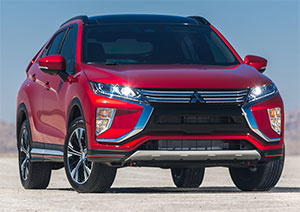 Those kind of power numbers didn’t exactly peak our anticipation for test track results. Still, the Eclipse Cross doesn’t feel underpowered by any means. It’s a little lazy at launch, but then graceful amounts of power begin pouring on, ushering you to 60 in a respectable 8.6-seconds.

The CVT has simulated shifts that help things sound a little less frantic working your way down the track. That all comes to an end in 16.7-seconds at 79 miles-per-hour.

Mitsubishi had to expect some backlash, choosing to resurrect the Eclipse sport coupe’s name on a ute; so they made an earnest attempt to make corner handling worthy of the name.

But a lot of the agility comes from the all-wheel-drive system, which uses selective braking to minimize understeer. Otherwise, we’d call it firmly average; betrayed by safe and slow steering and a fair amount of body roll.

The Eclipse Cross does have all of the features you expect in the modern day compact crossover. Meaning a color multi-information display, steering wheel controls, naturally a backup camera, plus automatic climate; they’re all standard.

Our mid-level SE was outfitted quite nicely, similar to many brand’s top trim levels; and adds a host of comfort and convenience features like heated seats, push button start, and Mitsubishi Connect. 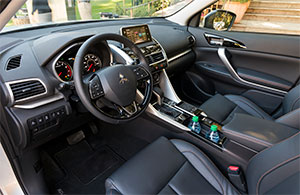 The 7-inch infotainment screen shoots out of the dash, and is controlled by a square touchpad controller on the console. There’s a definite learning curve to figure it out, and even once you do, it can be frustrating.

The Eclipse Cross launches a new Mitsubishi Connect subscription service that, in addition to the usual safety notifications, gives you remote access to your car with a cell phone app; allowing you to unlock the doors, change vehicle settings, and even set parental controls.

Seats are sufficiently comfortable, and the general pleasantness of the interior has you wanting to spend plenty of time in the cabin.

The exterior is among its best features; being rather dramatic looking for this usually appliance-like segment.

The front bares a strong resemblance to the Outlander family, and in profile the appearance favors a wedge, but yet a bit more coupish and sporty than most compact crossover rivals. 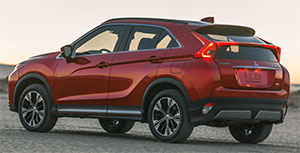 The rear is tall, with a split-glass hatch that brings to mind the Pontiac Aztec and the original Honda Insight. While you do see more outside, the split is quite distracting through the rear view mirror.

All-wheel-drive Eclipse Cross’ have Government Fuel Economy Ratings of 25-City, 26-Highway, and 25-Combined, which we matched almost perfectly with an average of 24.9 miles-per-gallon. Earning an average Energy Impact Score, with the use of 13.2-barrels of oil yearly while emitting 5.7-tons of CO2.

The front-drive Eclipse Cross starts at $24,290, all other trims come with all-wheel-drive and top out with the SEL Touring for $31,390.

While the brand has been on a roller coaster ride here in the U.S., becoming the junior member of the Renault-Nissan-Mitsubishi Alliance has added tremendous stability. And, given that Mitsubishi has a global history of building rugged, dependable, SUVs, we think 2018 Eclipse Cross has a real chance to succeed.

True, by bringing back the Eclipse name, Mitsubishi is clearly aiming to cash in on the Eclipse Coupe’s reputation as a stylish, compact performer that delivers a lot of bang for the buck. We can see many of those same words applying to the Eclipse Cross. So, it might just be exactly what Mitsubishi needs to stay relevant, as they continue to rebuild the brand here and around the world.