Believe it or not, it was actually 6 years ago at the 2012 Paris Motor Show that Mitsubishi showed us their vision of the future…the Outlander Plug-in Hybrid SUV. Since then, availability of this midsize hybrid utility has been slowly trickling around the world, and has finally arrived here in the States. Let’s find out if it was worth the wait.

Considering that Mitsubishi is currently boasting a mostly all utility lineup, it makes sense, that their most advanced plug-in would be based on a crossover. Thus, the 2018 Mitsubishi Outlander PHEV.

But, they’ve done much more than just tack tack an electric motor and battery pack onto their Outlander. As you may remember, Mitsubishi was actually one of the first to have a full EV on the streets in the U.S., with the tiny iMiEV in 2011; and it remains the least expensive EV to date as well.

The Outlander powertrain starts with a 2.0-liter I4. Designed with efficiency in mind, output is modest at just 117-horsepower and 137 lb-ft. of torque. It works with a unique single speed reduction gearbox. 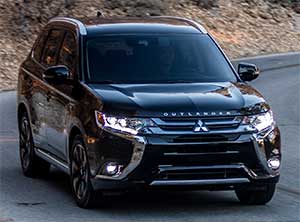 Adding to it, are a pair of 60-kW electric motors; one located on each axle, giving the Outlander a two-motor all-wheel-drive system. And again, Mitsubishi is no stranger here either, having earned accolades for their all-wheel-drive systems in both rugged off roaders, as well as in performance machines with many generations of rally racing inspired Lancer Evos.

The 12.0-kWh battery pack offers a 22–mile EV-only range, a few less than the Kia Niro PHEV we tested a few weeks back, though that of course is front-wheel-drive only. The MINI E Countryman, with a similar all-wheel-drive arrangement, has just 12-miles of EV driving. So, it’s squarely in the game.

In operation, the Outlander is more similar to the Chevrolet Volt than a typical hybrid; as it wants to be an EV as much as possible, and uses the gas engine more as a generator to charge the battery, seemingly only applying engine power to the wheels when it’s absolutely necessary.

Otherwise, behind the wheel, the Outlander PHEV drives like a usual hybrid; but with very quiet operation of the powertrain, as well as the entire vehicle. NVH is noticeably improved over the last gas-only Outlander we tested. 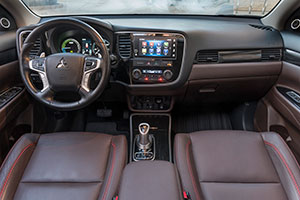 ou can drive it around like a normal vehicle without really even thinking about where the power is coming from; though due to battery charging efforts, engine noise doesn’t necessarily correlate to throttle input. Or, with three drive modes to choose from, you can opt to save EV mode for when you want to use it, or prioritize battery charging.

None of that seemed to hinder it at our test track, however. Steering was light and fairly quick; and the Outlander seemed eager to give us all it had. Understeer arrived gradually and was very predictable.

Grip was quite good; and while we could sense the power delivery coming from the front and rear sources, they seemed to blend almost seamlessly, unlike the herky-jerky push-pull we’ve felt in some other PHEV’s with similar setups. It was much more fun here than we expected.

And it’s quick off the line initially, aided by the electric boost; but then just as quickly, it settles into a mild progression of power; taking us a lengthy 9.7-seconds to hit 60. 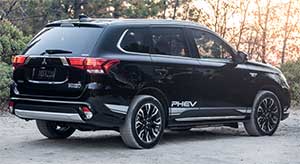 For the 17.5-seconds of wide open throttle that it takes to complete the ¼-mile at 80 miles-per-hour; the engine really sounds strained, like it has been forced to work overtime and is very unhappy about it.

Mitsubishi’s graphics designers put in some extra hours as well, applying a considerable amount of decals and badges just about everywhere on the vehicle. Now, we could certainly do without all the extra cries for attention; but otherwise the Outlander is a very nice, modern-styled utility.

Inside, are unique gauges and displays of course; and what appear to be large shift paddles, they’re actually adjusters for the amount of regen braking you want.

Government Fuel Economy Ratings are 74-Combined for the MPGe, and 25-Combined overall. We averaged a very good 34.8 miles-per-gallon on Regular gas. The Energy Impact Score is quite good, using just 6.8-barrels of oil annually, while emitting 2.9-tons of CO2.

Pricing starts at $35,590, though depending on your situation, tax incentives could bring that down to just under 30-grand. Up level GT trim start at $41,290.

Since Mitsubishi doesn’t really have any big sellers these days, it’s hard to see the 2018 Outlander PHEV going gang busters in a crowded crossover market. But they really do have a good thing going here, and it’s certainly great to see that they finally look to have a solid plan going forward. Here’s hoping we see more of this from Mitsubishi, no matter how long we have to wait.