Over the years Nissan’s utility lineup has steadily grown, to become quite comprehensive. Ranging from the full size and rugged armada to the tiny and quirky Juke and just about everything else in between. But they’ve also become more and more mainstream. So now it’s out with that funky junk and in with a whole new Kicks.

We’ve driven all manner of Nissan utilities over the years, from rugged to refined. And truth be told, we were never huge fans of the funky Juke. But, it certainly had presence, and was pretty fun to drive to boot.

So, what do we get with its tamer looking replacement, this 2018 Nissan Kicks?

At its essence, the Kicks is a jacked up, reskinned Versa Note. But, exaggerated fenders and lower-body cladding add a rugged element; while up sweeping body lines and blacked-out greenhouse set an aggressive and sporty tone. 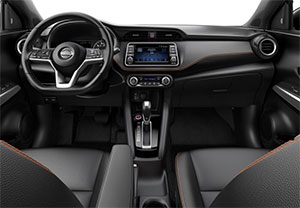 Powering this tiny runabout, is a naturally aspirated 1.6-liter I4, rated at only 125-horsepower and 115 lb-ft. of torque. Transmission is a CVT. Like the Toyota CH-R and Kia Soul, it’s part of the urban crossover breed that is front-wheel-drive only. Formerly known as a hatchback; though Kicks is a tall one, with a stout 7.0-inches of ground clearance.

SV trim ratchets it up with Apple CarPlay and Android Auto, auto climate control, and a 7.0-inch digital instrument cluster.

Luggage space is among best-in-class at 25.3 cubic-ft.; expanding to 53.1 with the seatbacks folded.

Room for passengers is generous too; and for an entry-level ride, it’s reasonably quiet inside, and seat comfort is quite good. Little things that often fall short in economy-based rides, like the armrests and user interface, are actually highlights here. 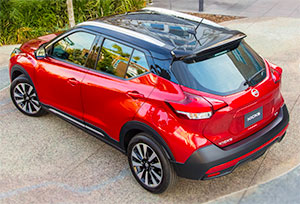 Yes, the bulk of interior materials are plastic, but they are nicely-textured and have a good feel.

So, all is good up until this point, but 125-horsepower and CVT didn’t exactly drum up excitement on track day.

And as expected, there’s not much kick to the Kicks off the line. But, once it’s movin’, it’s improvin’.  After getting over the hole-shot slump, the engine revs freely and sounds eager. Still, expect a long 9.7-second trip to 60. That’s almost two seconds longer than a turbocharged Juke, but a hair faster than a comparable Ford Ecosport.

As for the CVT, it was a little better than expected; Nissan’s latest Xtronic does have simulated shifts, feeling about as real as it gets.

Things improved dramatically when we added some back-and-forth into the mix. We found nice gentle understeer; paired with quick, well-weighted steering, good grip, and a compliant chassis.

A short 115-feet was our average stopping distance from 60. Pedal travel is on the long side, but stops were straight, true, and fade free.

Even better, Automatic Emergency Braking with Forward Collision Warning comes standard. In our barrier test it performed similar to other recent Nissans. It worked every time at speeds up to 10 miles-per-hour, but stops are very abrupt and jolting.

Kicks Government Fuel Economy Ratings are quite good at 21-City, 36-Highway, and 33-Combined. We averaged a fine 34.7 miles-per-gallon of Regular. There’s a great Energy Impact Score too, considering this is not a hybrid of any kind, using just 10.0-barrels of oil yearly with 4.5-tons of CO2 emissions.

After all of that, we were expecting the Mexican assembled Kicks to cost more than its $18,985 base price. Top trim SR is just 23-hundred dollars more at $21,285. That makes it among the better bargains in this bargain class.

Whether it is the low price, or just being oversaturation with tiny crossovers, we had modest expectations going in. But we came away quite impressed with the 2018 Nissan Kicks. More impressed than we’ve been with any other entry-level Nissan in quite some time. It’s quiet, feature-packed, efficient, and good-looking. And, along with the slightly larger Rogue Sport, it appears Nissan is finally back in the business of making great small cars. Only now they just happen to be crossovers.