While Tesla seems to make headlines just about every day, let’s not forget that the Nissan leaf was the first mass-produced EV to hit the streets here in America. And, to this day, is the best-selling electric vehicle in the world.  Well, now there’s a second generation leaf on the road; so let’s turn it over and go for a drive.

The sprouting of new leaves, always signals the arrival of Spring; and with it, comes warmer weather and optimism on what a new season will bring. Well, we can’t promise warm weather yet, but surely, Nissan is hoping this second generation Nissan Leaf will bring EV-driving to more people, in an American car market that is still slow to buy into the EV-lifestyle.

Range continues to be the number one issue when it comes to commitment to EVs; and for this redesigned Leaf, that number increases to 151-miles. Many, including us, were hoping for more; but Nissan chose to instead focus on improving the Leaf’s practicality, and lowering its price, in order to make it a better vehicle option for more people. More on that later. 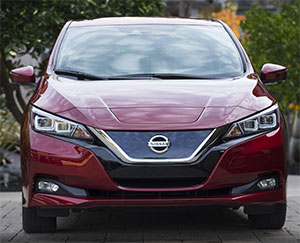 Battery size has grown from 30 to 40-kWh; so charge time for a complete fill does increase to 7½-hours with 220, but the larger 6.6-kW onboard charger that was optional before, is now standard.

The new Leaf sports the same basic 5-door shape of before, but with much sharper lines to downplay the obvious EV look. Less like an egg, and more like a sporty hatchback. Though it still looks “techy”, and current Nissan signature elements such as a floating roof, V-Motion grille, and boomerang lights are here as well.

Tech upgrades are quite comprehensive. In addition to Nissan’s ProPILOT Assist intelligent driving system; there’s a new e-Pedal, that dials up the regen braking to allow for 1-pedal driving in most situations.

Going about your business, you instantly feel the additional power; we’re not talking Tesla-levels of acceleration off the line here, but the increased torque does wonders for highway merging. 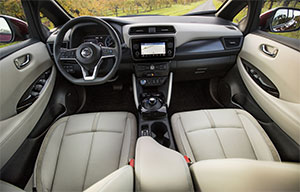 Nissan has also addressed the electric power steering, giving it a more natural feel; as well as softened up the suspension a bit, to provide a smoother ride.

Just as any new tech device should be but often isn’t, everything about the Leaf is easy to operate; and in most ways it behaves just like any other car. No learning curve to embrace the EV-lifestyle here, other than the brake pedal feel, and of course remembering to plug it in.

Likewise, things around the cabin, are fairly traditional in both appearance and operation. There is some blue trim giving off that EV vibe, but all the usual controls are in all the usual places; including many on the new flat-bottom steering wheel.

Gauges get an upgrade, now a 7-inch TFT-based display that can be configured in a multitude of ways; though an analog speedometer does remain.

To make things more pleasant for occupants, cabin noise is reduced, and material quality stepped up a bit. They could have gone further, adding additional small item storage, but there’s always next time. 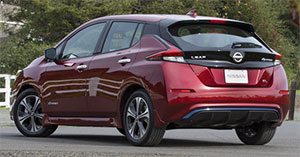 As for the big stuff in back, cargo space actually stays the same 23.6 cubic-ft., but the space has been re-worked for more utilization, so it does handle bulky items better. Max capacity with rear seatbacks folded is 30.0 cubic-ft.

The new Leaf boasts Government MPGe Ratings of 125-City, 100-Highway, and 112-Combined. For a near perfect Energy Impact Score of just 0.2-barrels of yearly oil use, with 0.0 CO2 emissions.

The biggest news of all, is that in order to better compete with the Chevrolet Bolt EV, as well as the multitude of new rivals just over the horizon; the Leaf now gets a much lower price, starting at $30,885. That’s about 3-grand less than the original; and as of right now, government rebates of at least $7,500 are still in play.

So, while the fully electric vehicle’s flow into our automotive landscape has been more of a slow drizzle than an all-out downpour; it has been steady enough to enable cars like the Nissan Leaf to make a splash. Unlike the original, it doesn’t break much new ground. But with a lower price, longer range, increased practicality, and more mainstream styling; we feel the Leaf’s ripple will continue to expand further and faster.