We constantly rave about Porsches and particularly the 911; being the very definition of effortless performance with precision. But there is a more sinister side to Porsche and the 911, it’s the GT2 RS. Like most cable news talking heads, it’s bold, brash, borderline offensive, but also very fast; and we just can’t get enough of it!

The current generation 991 Porsche 911, in any of its endless variants, is far from ordinary. But, there’s always the chance to take things to the extreme; which is exactly what Porsche did by creating this 911 GT2 RS.

Now some may just see a gussied-up rear- drive 911 Turbo. But, it’s light years more than that. 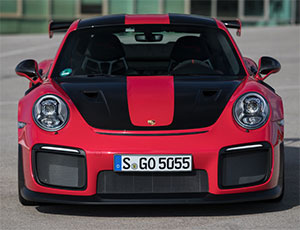 And sure, that may be 140-horsepower less than a Dodge Demon; but hey, we’re also dealing with about 1,000 fewer pounds here.

PDK only, for the transmission; with the requisite upgrading to handle the additional power, as well as shuttle you to 60 in 2.7-seconds. You heard me!

But rather than just cramming bigger turbos on it, and calling it a day; Porsche engineers moved on to the suspension, getting rid of just about anything that flexes even a bit.

Next on the checklist, was eliminating weight.  Front fenders and the cargo compartment lid are carbon-fiber; while the roof panel is magnesium, and the exhaust system is titanium, accounting for 15-lbs. all on its own, and sounding awesome as well.

If weight is really an issue for you, the radio and A/C can be eliminated; and even more pounds can be shaved with an optional Weissach package, which includes magnesium wheels and a lot more carbon-fiber.

Of course aero has been enhanced to create more downforce, and they managed to squeeze in 325-rubber on the 21-inch rear wheels, 265 on the front 20s. 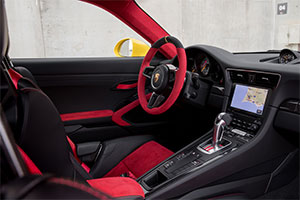 Climb in, and you quickly notice the carbon-fiber full-bucket seats that give new meaning to “highly-bolstered”.

Start driving, and you experience the kind of response you could only wish for out of your teenager. Tell it to do something and it just does it immediately, without question. So, it’s on you to make sure you give it proper commands.

We did our best at Summit Point Motorsports Park in West Virginia. This is not a car for inexperienced or timid drivers. It demands decisive action and full commitment once you crank the wheel and pin the gas pedal. Get it right, and the reward is heroic levels of grip with rocket-ship acceleration out of the corners and down the straights, having you feeling like there’s another hundred horsepower than they claim.

At the speeds this car is capable of, things happen very quickly, so you really have to have patience not to turn in too early or too fast, or squeeze the throttle too soon; as any of those scenarios will trigger some pretty dramatic oversteer.

And, at this point and time, we should probably complain about the lack of a manual transmission; but you won’t hear that from us. The PDK is unbeatable for track work; even leaving it in auto/Sport we never wished for a better downshift, or for a gear to be held longer.

After burning through three tanks of fuel on a long, hot track day, and stomping on the ceramic composite brakes repeatedly, from speeds as high as 175 miles-an-hour, the GT2 RS never complained or showed any ill effects. We can easily say it’s the most capable street car we’ve ever driven on the track.

A supercar? Yes, and it is priced accordingly at $294,250 just for starters. So, unfortunately for us working stiffs, the GT2 RS is more for the “money is no object” types, than your typical track day enthusiast.

Too bad, as this is one 911 that every real Porsche enthusiast should experience. It’s capable of insane speeds, having briefly held the Nurburgring record as fastest production car ever to prove it. But, much like every recent 911 we’ve driven, the 2018 Porsche 911 GT2 RS is more than just the sum of its parts; it’s a wonderfully engineered piece of automotive excellence, with a nirvana-like driving experience that nothing else can match.