The all-wheel drive, 580-horsepower, 911 turbo, may get most of the shout-outs when it comes to Porsche street talk. But on a road course, it’s the rear-drive 911 GT3 cup race cars that bring home the trophies. Fortunately, you can buy a street-legal GT3, and it even comes off the same production line. Plus, it’s all-new for 2018. Even better for us, our Greg Carloss has just returned from driving the new GT3 in Spain.

GREG CARLOSS: One of the most common complaints I hear about modern cars is that they lack emotion. Instead of extensions of ourselves, new vehicles tend to be soulless appliances, simply taking us from A to B – which you could argue is their true purpose. But as a car enthusiast, I want something with attitude. Maybe a bit wild. I need a car that takes me from A to B, C, D…heck, maybe even Z.

The 2018 Porsche 911 GT3 checks every single one of those boxes and a weekend in Granada, Spain granted me the opportunity to experience a true, soulful drive. 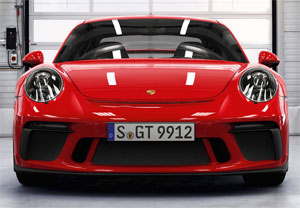 Slicing through the Spanish countryside, the GT3 feels at home even though it’s really bred for the racetrack. A new free-breathing 4.0 liter flat-6 responds immediately to throttle inputs with the majority of its torque coming in after 5,000 RPM and even then, there’s an extra 4-grand to play with before a shift is required. That’s where another change to the GT3 lies. A 6-speed manual transmission returns after it was left out of the last total redesign. Derived from the 911 R, throws are short with a solid, mechanical feel making it a joy to use on the track or the street.

On the ride to Circuito Guadix for my afternoon track time, I passed through the narrow streets of LaPeza, where the Racing Yellow GT3 took on the sun’s gravitational pull, quickly becoming the center of the town and burning a hole right through the thick language barrier. After such a warm welcome, how could I keep a car like this to myself?

Eventually the time came to say “adios” and head to the GT3’s natural habitat.

“I’ve driven plenty of cars around the racetrack and this one is just one of those cars that feels like it’s supposed to be here. There’s just a ton of grip. Clearly it just revs forever. Super flat through corners; you have rear-wheel steering here. And it just sounds phenomenal. I mean listen to that…I mean it’s about as close to a racecar as you can get. I know we’re in an era of 700, 800-horsepower cars, but this car is extremely well-balanced and you can kind of forget that 500-horsepower is still a lot horsepower and it’s plenty to get you around this track really fast!” 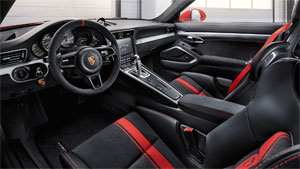 Of course for Porsche, the finished product is the sum of extreme attention to every detail, and for this 6th generation GT3, it starts with the engine.

The new; still normally aspirated; 4-liter replaces the previous 3.8, and is a direct kin to the 6 in the GT3 Cup Car. With the extra displacement horsepower output is up 25, totaling an even 500 as torque jumps 15 lb.-ft to 339.

A uniquely tuned 7-speed PDK remains the standard transmission and features a paddle neutral function, which disengages the clutches by pulling on both wheel-mounted shift paddles, granting more control over weight transfer. It also allowed the driver to fine-tune engine speed when accelerating for an estimated 3.2 second 0-60, compared to 3.8 with the no–cost manual option.

The GT3 uses the wider Carrera 4 body and rides lower than a standard 911. Front and rear fascias are aerodynamically optimized with larger intakes and new lateral air blades up front for improved cooling. Mounted above dual air scoops, the signature carbon fiber wing reaches 3 quarters of an inch higher, increasing downforce by 20% in conjunction with the rear underbody diffuser.

A stripped-down cabin maintains sophistication with a minimalist steering wheel and Porsche’s Track Precision app as standard. Two seats are all you get, which can be swapped for either adaptive sport or carbon-fiber reinforced full bucket seats. The engineers even had enough carbon fiber left over to make new hinges for the rear hatch to shave weight, although it still weighs the same as the previous version at 3,153 pounds.

As mentioned before, the rear axle steering system has been revised for better progression when turning up to 1.5 degrees in the same or opposite direction as the front wheels depending on speed. Rotation is further aided by Porsche Torque Vectoring to complement stability management, which can be turned completely off, allowing for plenty of sideways debauchery.

My car was outfitted with the optional Ceramic Composite brakes, which excelled at handling the heavy abuse I inflicted as a newbie to the compact course. 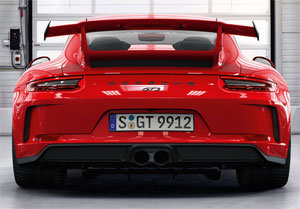 Of course all this performance comes at a price. $144,650 gets you into a GT3, but be prepared to shell out a great deal more for the any extra performance hardware.

The 2018 Porsche 911 GT3 is a technological marvel with an old soul, perpetuating the brand’s ethos of being in the here and now, leaving just one toe in the past. But, are we nearing the summit of the naturally aspirated, rear engine 911 mountain? Probably. Fortunately, we need not fret the future. We’re in the present, where this emotional car still exists and thrives.