We’re pretty sure the pioneering hybrid engineers for the Toyota Prius and Honda insight never imagine something like the Porsche Panamera E-hybrid! But now that hybrid technology has moved from magic to mainstream, Porsche is taking their latest hybrid to a new performance level. And that’s only a slice of Panamera news. So let’s get to it.

The 2018 Porsche Panamera Turbo S E-Hybird is not the first Panamera hybrid of course, but it’s certainly the best yet.

And if you’re still an enthusiast who cringes when you hear “hybrid”, you should know that the 918 Spyder…plug-in hybrid…is the only Porsche more powerful than this one.

Total output for the Panamera’s four driven wheels is 680-horsepower and 626 lb-ft. of torque. All from a twin-turbo 4.0-liter V8, with the help of a 100Kw electric motor.

The usual drive modes allow you to take control of where you want the power coming from. E-Power allows you to go for a max of 31-miles of battery alone, thanks to 14.1-kWhs of storage; more than enough to run silently past your Tesla-owning neighbor’s house. Switch to Sport Plus once you get out of the neighborhood, crack open the throttle, and get max performance from all power sources. Plus, an 8-speed PDK is still there for gearing. 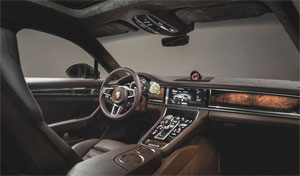 Putting aside the EV techno-babble, this Panamera feels like the most luxurious sport sedan on the road. A new air suspension is standard equipment for a downright luxurious ride, yet Porsche insists that it must still handle darn close to a 911 when the time comes.

That time for us, came at the Vancouver Island Motorsport Circuit, where it didn’t take long to come to grips with the immense amount of grip this Panamera has for cornering. And the rush of power coming out of corners is truly epic! All of this despite over 5,000–lbs. of weight and more than 16-feet of length.

Away from the track, it feels so normal, it’s easy to forget you’re even in a PHEV, until the gas engine kicks in rather curtly, bringing you back to performance car reality. It’s a delightful machine that feels as great highway hypermiling as it does corner carving.

Visually, the Panamera got a makeover just last year, though it still tends to simply look like a stretched 911. The Turbo S E-Hybrid gets 21-inch wheels and Porsche Ceramic Composite Brakes, on which they insist on adding “acid green” calipers.

Likewise, inside, the familiar up-sweeping console was redesigned last year, with touch panel controls replacing many of the previous gens switches and knobs. It may look less like an airplane cockpit now, but we find touch panels still frustrating at times.

Admittedly, the Turbo S E-hybrid resides at the top of the Panamera food chain, but there’s still a “surprising for Porsche” level of standard equipment.

Now, if it’s a new look you’re looking for, feast your eyes on the Porsche Panamera Sport Turismo. It’s not quite a wagon; and since the base Panamera is already a hatchback, we’ll agree that it’s different, what the Brit’s might call a “Shooting Brake”

The ST’s elongated roofline meets some hefty D-pillars, and there’s a redesigned hatch to access the small addition to storage space; 18.3 cubic-ft. over the base Panamera’s 17.6. Folding seatbacks expands it to 49.0 cubic-ft. The Sport Turismo also gained an additional seatbelt in rear for taking along an additional passenger.

Now, in order to get the complete Panamera picture, when it came time to get one for our home test track, we opted for the lengthy, high-powered opulence of the Panamera Turbo Executive.

5.9-inches may be added to the wheelbase for more rear seat leg room, but the 550-horsepower 4.0-liter twin-turbo V8 under the hood is more than enough to get it down the track in a hurry.

We hit 60 in just 3.5-seconds, clearing the ¼-mile in 11.8 at 120 miles-per-hour. PDK launch control is as brutal and flawless as always. We never get tired of experiencing it.

And just in case you’re wondering, the Turbo S E-Hybrid, with its electric assist, can do the 0-60 deed in just 3.2-seconds.

To sum it all up with pricing, expect to pay at least $185,450 for the Turbo S E-Hybrid. So, you’re not just paying for the experience, but for the tech. behind it. The Sport Turismo starts a much more reasonable $97,250, around 10-grand over a base Panamera. The Turbo Executive resides in between at $161,050.

Porsche’s no compromise approach for the 2018 Panamera Turbo S E-hybrid, combined with the truly different Sport Turismo, shows that Porsche is just getting started with its biggest car ever. And while many questioned building a 5-door sedan in the first place, after just 7-years, it’s hard to imagine the brand without it.