The Subaru WRX has been many things over the years from wild to mild. But all have been entertaining and high on the “bang for the buck” spectrum. 2018 sees a host of improvements to both style and comfort, and more importantly, performance! So, time to hit the track and find out what this new WRX is all about.

The 2018 Subaru WRX sedan may not look all that different from before, but fairly significant changes have taken place.

It does still ride on the same chassis as before, not the new Subaru Global Platform that underpins the current Impreza sedan and hatchback. But the suspension bolted to it, has been reworked with promises of both better handling and improved ride comfort.

There are also some new materials inside, and Subaru claims a quieter cabin thanks to thicker door glass and revised door seals; though we sure couldn’t tell a significant difference.

We do very much appreciate the Recaro front seats, however. They’re part of a new Performance Package that can be added to WRX Premiums but only with a manual transmission.

The rest of the package is comprised of new Jurid brand brake pads installed in red-painted calipers, and deletion of the moonroof that usually accompanies Premium trim. 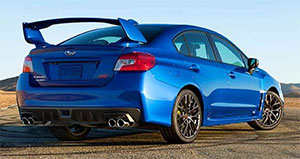 For better or worse, nothing changes under the hood, the same 2.0-liter boxer-4 turbo works loudly and proudly; overachieving its way to 268–horsepower and 258 lb.-ft. of torque.

All-wheel-drive is of course standard; and for some reason, Subaru does still offer a CVT; but as we noted, not with the Performance Package.

In regards to the 6-speed manual, shifter feel has been improved, thanks to a new synchro design. Likewise, clutch operation has been smoothed out, though we don’t really remember that being a problem in the previous WRX.

The WRX has always been an adequate on-track performer with rally racing at its heart; while current competitors such as Ford Focus RS and Honda Civic Type R seem bred strictly for sticking through paved corners, rather than sliding around dirt ones.

Still, it equated itself quite well on the hard stuff here at Roebling Road Raceway. Nothing really surprises you about the overall driving experience; competitors may have more power, but’s it hard to argue any of them are more fun to drive.

What power the WRX does have, it lays on you with an immediacy that occasionally comes on a little strong. Sometimes you just want to breathe on the throttle a little bit to get you through a corner, but the hyperactive reaction from the gas pedal, doesn’t always allow for that.

The WRX’s electric power steering has been revised to provide more feel, but perhaps the biggest impact on our track time came from those new brake pads. We felt much more confident braking hard into corners than we ever have in a WRX; and they held up much better throughout our track days.

So while we can’t necessarily say the Performance Package makes for drastic improvements on the track, Subaru has addressed our two biggest gripes from our last WRX test; better seats and improved brakes.

And ride quality away from the track, has surely taken a turn for the better; it’s not that it was overly stiff before, there just seems to be much more composure to the way it handles pavement imperfections now.

The WRX looks as aggressive as ever, in fact Subaru claims it’s even more so, thanks to a new front end with larger and lower grille openings.

As before, all-wheel-drive grip makes for a speedy lurch off the line, even on Roebling Road’s slippery front straight, where we hit 60 in 5.6-seconds, 2/10ths off our quickest time ever with this gen. WRX. The ¼-mile passed in 14.1-seconds at 98 miles-per-hour.

Government Fuel Economy Ratings with the manual are 21-City, 27-Highway, and 23-Combined.

This 2018 Subaru WRX with Performance Package is surely just a stop gap measure, until the all-new WRX, still just over the horizon. It will be interesting to see where Subaru heads with the next one, now that they have the BRZ in the fold.  But as for right now, the spirit of the original WRX remains intact; as a very attainable, highly fun piece of automotive performance that you can drive to work every day.