We’ve been down this road before, Subaru has an awesome car available in japan, but not here in the states.  Eventually, Subaru does bring it here, but either it’s a dumbed down version, or it simply doesn’t live up to the hype. So we naturally wonder, is that the case for the WRX STI type RA? Or is it a new era for Subaru performance here in America.

The news from under the hood, unfortunately, does not include a new engine. But rather, improvements to the STI’s 2.5-liter turbocharged boxer-4.

Starting with a relatively simple new cold air intake and high flow-exhaust system to improve air flow in and out; to the more involved addition of stronger pistons and reprogramming of the ECU. Still, before you get your hopes up too high, the result is just 5-additional horsepower for a total of 310, with the same 290 lb-ft. of torque. 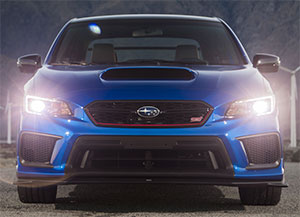 Things are a little more comprehensive in the weight loss department. There’s a new carbon-fiber roof panel and rear wing, along with 19-inch forged BBS alloy wheels. And just to fully pick all of the low hanging fruit, Subaru also removed the spare tire.

It makes for one aggressive looking sedan, appearing both fast and yes, furious. Cherry Blossom Red trim on both the grille and rear bumper help set it apart; as do an STI underspoiler, and gold wheels, which are of course a Subaru thing.

A thorough revamping of the suspension, includes adding Bilstein dampers, as well as some updates to the Vehicle Dynamics Control.

All STI’s get a brake upgrade for 18, the RA’s calipers feature a silver finish. There’s also a new Driver Controlled Center Differential, for customized power delivery.

Sounds like the kind of stuff we need a track to evaluate, and fortunately Summit Point Motorsports Park is within an easy reach of our office. 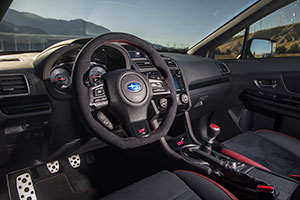 And without a doubt, the Type RA feels like the real deal on a track; less like a dirt-spitting rally car and more like a true pavement star. Befitting, as the RA nomenclature stands for Record Attempt.

The first things we noticed out of the gate, is it’s an easy car to drive fast, and steering feel has vastly increased; turn-in is rapid-quick. Like, pay attention to what you’re doing quick.

All Type RAs get a 6-speed manual transmission with revised gear ratios; controlled by a short-throw shifter. The gearing seemed perfect for this track, with steady power whenever we needed it; and no shifting sooner than we’d like coming out of the corners.

We still battled some understeer, but corner grip was quite good; and despite just the 5-additional horsepower, we found plenty of oomph out of the turns.

So, the RA really shines on a road course, but not so much on a drag strip. Even with less weight and a bit more power, it took us 5.4-seconds to hit 60. While plenty quick, it was actually a half second slower than we got in an STI back in 2015. 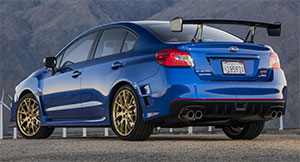 Likewise, the ¼-mile was slower; 13.9-seconds at 101 miles-per-hour. This is probably due to the revised transmission gearing, as the redline arrives in a hurry; but the engine itself seems to rev freer as well, having us grabbing 5th gear at the end of the ¼. Again, its plenty fast and the straight line is really not what this car is built for, so we’re happy.

Inside, the Type RA comes with Recaro front seats, Ultrasuede-covered steering wheel, and a plethora of red trim and stitching; as well as a number plaque on the center console.

Government Fuel Economy Ratings are 16-City, 22-Highway, and 18-Combined. That’s a poor Energy Impact Score of 18.3-barrels of yearly oil use with 7.9-tons of CO2 emissions.

Adding $12,900 on top of a manual-equipped STI puts the RA at a pricey $49,855. We’re not sure how many people out there are willing to spend close to 50-grand for a Subaru sedan. But, they will be getting something pretty special, with only 500 slated to hit the market.

In a long line of special Subaru’s, the 2018 WRX STI Type RA is a standout, and hopefully a reliable predictor of the future of Subaru performance here. So, if you’re looking for the ultimate factory fresh WRX, the RA has your name on it.