When Volkswagen opened up a plant in Chattanooga, Tennessee; to build a new Passat sedan; everyone assumed that car was just first of things to come.  Well, that was 6 years ago! now, finally, we get to see VW’s second effort from the “dynamo of dixie”, the largest utility the brand has ever made; and designed specifically for the American family; the Atlas! 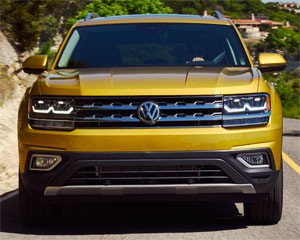 Back when the 2018 Volkswagen Atlas was going through its early design stages, VW must have been nervous about where the SUV market was headed.  It turns out, they needn’t have worried, as utility sales continue to escalate like it’s 1999 all over again.  And Atlas appears to be exactly the right vehicle that Volkswagen needs.

This 3-row, 7-passenger, approaching full-size crossover, is longer outside and roomier inside than the Honda Pilot or the Toyota Highlander. In fact, at 198.3-inches, its overall length is exactly the same as the Ford Explorer.

VW went for a somewhat old-school, rugged, yet boxy look here, with a familiar front that unabashedly resembles the rest of the VW lineup.

There’s 8.0-inches of ground clearance; and 18-inch wheels are standard on all but top trim SEL Premium, which gets 20s.

Familiarity lies under the hood as well, with a standard 2.0-liter I4 turbo rated at 235-horsepower and 258 lb-ft. of torque. 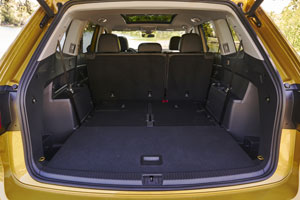 You’ll have to step up to the optional naturally-aspirated 3.6-liter VR6 if you want all-wheel-drive.  It delivers 276-horsepower and 266 lb-ft. of torque through the 5th generation of VW’s 4Motion permanent AWD system; which operates in front-wheel-drive mostly, but sends as much as 50% of power rearward when slip is detected.

Two off road modes are part of Driving Mode Selection.

Putting an all-new vehicle out right now without the latest in safety tech, would be a no-go; so the Atlas has most goodies available, from full Stop and Go Adaptive Cruise Control to Autonomous Emergency Braking. 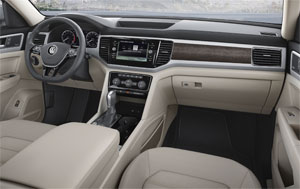 Inside, the dash design is similar to the Passat, but less drab and a little more modern.

Materials and trim are quite good, better than most in class; though nothing quite to the level of the Mazda CX-9’s up-level Signature.

All but base trim get an 8.0-inch touchscreen display with varying levels of features.  Operation is intuitive, and response is much quicker that previous VW systems. Apple Car Play an Android Auto are included.

No doubt helped along by the available panoramic sunroof, the interior certainly does convey spaciousness. Yet, Atlas drives like a much smaller vehicle with light, crisp steering. No lumbering ute here, and a good stablemate to the compact Tiguan.

And believe it or not, the Atlas is actually built on the same MQB architecture as the Tiguan, and the Golf.

Three adults will find good room in the second row, and a pair of grownups can even ride in the 3rd row. Furthermore, access to that 3rd row is fantastically easy.

As for cargo, you’ll find almost a minivan’s worth of space. Raise the available power liftgate for 20.6 cubic-ft. behind the 3rd row, that’s more than Pilot, less than Explorer. There’s 55.5 cubic-ft. behind the 2nd row, and its 96.8 cubic-ft. max with all seats folded totally flat. That betters both the Pilot and Explorer, and even the Chevrolet Tahoe.

The nimble nature that we felt on the street was more than evident through our slalom course as well.  There’s a very tight and sold feel, along with an eager to turn-in chassis; though there was a little more body roll than we expected. 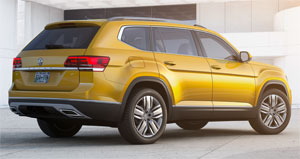 The VR6 engine has been around for a couple of decades now, and power delivery does indeed feel very old school.  It took us 7.9-seconds to hit 60; with the full ¼-mile trip taking 16.0-seconds at 89 miles-per-hour.

Shifts from the 8-speed automatic are very smooth, and engine noise is well restrained.

With all-wheel-drive, Government Fuel Economy Ratings are 17-City, 23-Highway, and 19-Combined.  And, 19 was our  average on a mixed driving loop.

Like most larger 3-row utes, the Atlas delivers the basics for just over $30,000, and you’ll pay close to 50 for the best of everything. But, our well outfitted V6 SEL tester, at $40,085, met all of our family needs and seemed like a genuine bargain to boot. All-wheel drive is $1800 more.

It took a while to get here, but early indicators are the 2018 Volkswagen Atlas was worth the wait. It’s the American-sized 3-row SUV that the VW faithful have been waiting for. IT’s packed full with a tremendous amount of space, comfort, and capability that will surely make it attractive to just about anybody in the market for a larger crossover.  VW is clearly “in it to win it.”