After reenergizing the brand with the 2016 XC90 crossover, and following up with an all-new S90 luxury sedan and V90 wagon, Volvo turned their sights to the midsize arena with an all-new XC60 utility. Most of what you see here looks familiar. So, let’s see if that XC90’s brilliance survives a bit of downsizing.

Volvo didn’t think too far outside of the box for their midsize 2018 XC60 crossover. Rather, they just took the wonderful package that is the XC90 and downsized it. Well, like most things, it’s not quite that simple.

It does ride on the same platform, which means you also have the same powertrains; starting with a 2.0-liter turbo I4, which at 250-horsepower is more than enough for most, add a supercharger and it bumps up to 316-horsepower. Finally, tack on some electric assist, and output for our T8, jumps to 400-horsepower and 472 lb-ft. of torque.

No matter which version you choose, all-wheel-drive is standard, and all have an 8-speed automatic transmission. 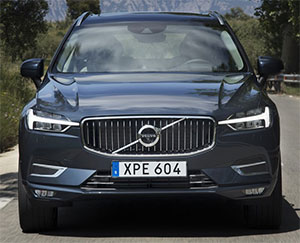 Nothing drastically different underneath, just a revised version of the double wishbone front and transverse leaf spring rear suspension. So, street handling is sound; making the XC60 reasonably entertaining as a daily driver.

Power is plentiful at all times and smoothly delivered; whether merging on the highway, coming out of curves, or leaving a stop light. Our only driveline quibble is some clunky downshifts at low speed, and a very unrefined feel to this plug-in hybrid’s regenerative braking.

Inside, you’ll find the high-end expert-level handcraftsmanship of the 90, but with a modified layout and approach. The overall feel is still high on luxury; and perhaps more impressive, many interior measurements are barely different than the XC90.

In fact, rear seat room actually feels more plentiful, since the 5-passenger XC60 doesn’t need to create access for a 3rd row like the XC90.

Much less cargo space than the 90 of course, but still plentiful for a midsize; at 29.7 cubic-ft. worth of gear in the back; expanding to 63.3 with rear seatbacks folded.

A “love it or hate it” central control tablet dominates the center stack. Mounted in the dash, glare was not a big problem. It’s very easy to do basic things too, but more involved demands require a few menus to go through and taking your eyes off the road more than we’d like. 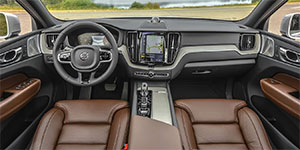 Seats are very comfortable in a way that only Volvo seems to have mastered, and near perfect seat height makes getting in almost like sliding into your favorite recliner.

Now, your recliner probably can’t get you to 60 in less than six seconds, however; and this XC60 T8 has no problem doing that.

It’s not so much a launch off the line, as it is an explosion of energy. We’re still not sure how this little 4-banger manages to hold together with a turbo and a supercharger feeding in boost, but it’s quickly becoming a favorite of ours. The added electric assist is just positively charged ionic icing on this 3-layer cake.

We hit 60 in 5.4-seconds. The automatic transmission shifts quickly and aggressively, and this power unit even sounds pretty good. 13.9 was our ¼-mile time at 99 miles-per-hour. 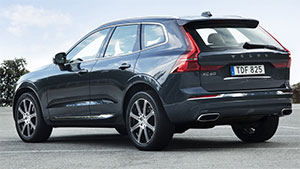 With less wheelbase, we were surprised it didn’t feel quite as agile, or for that matter refined, as the XC90 through our cone course. But, there was decent feedback and only mild understeer.

Where the XC60 mirrors its larger sibling the most is exterior design. It’s not quite an exact copy, but pretty darn close.  And that’s just fine by us, why re-engineer a good thing. The front end is a little more rounded, and greenhouse chopped a little.

The government gives the T8 a Combined MPGe Rating of 59, with an overall Combined rating of 26; which we couldn’t quite match with our average of 24.2 miles-per-gallon of Premium. For a very good Energy Impact Score with yearly consumption of just 7.3-barrels of oil, with CO2 emissions of 3.3-tons.

And lest we forget, this plug-in also has an EV-only range of 18-miles.

It may not be quite the value that the XC90 was when it first came out, but the base XC60 is still very reasonable, priced at $43,895.

So, the 2018 Volvo XC60 may be just a scaled down XC90. But that also means it is yet another fantastic product from the new Volvo. One that should have no problem standing out in a crowded field of great luxury utilities.