With all of the luxury 3-row SUVs out there, you might not realize that it’s the Acura MDX that is the best-selling one of all. That’s because since it debuted for 2001, it has mostly went about its business in the typical Acura kind of way. Subdued luxury, technology rich, and eminently reliable. So, no fuss…no muss. Until now that is.

For the first time, MDX buyers can step things up a notch with an A-Spec version of their beloved 3-row crossover. Still part of the 3rd generation MDX that arrived for 2014, the 2019 Acura MDX A-Spec comes with Super Handling All-Wheel-Drive standard, and a host of upgrades to make what is undoubtedly the flashiest MDX yet.

Its customary 20-inch wheels are half an inch wider than any previous MDX, and there’s more performance-oriented touches all around the body. 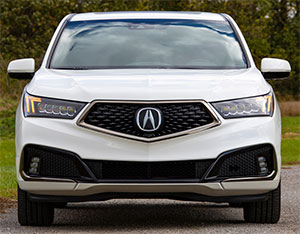 But even Acura considers this a “sport appearance package”, so don’t expect any earth shaking increases in how it goes and turns.

Same naturally-aspirated 3.5-liter V6, outputting a respectable 290-horsepower and 267 lb-ft. of torque. This mill is in a lot of Honda products, and never disappoints.

Matching 9-speed transmission too, though it does get some enhancements for ’19. In order to smooth things out from a stop, the MDX will now start you off in 2nd gear. You can negate this by switching to S-mode, and the MDX itself will engage 1st if it knows you’re towing, or are launching on an incline.

Wider wheels, with more rubber contacting the road, does add more grip to the already competent handling. Through the cones, this A-Spec felt as compliant as always, yet also solid, staying pretty flat as well.

Also as before, with SH-AWD, there is unique feel that takes some getting used to. The MDX tends to understeer initially then quickly reacts by diverting some power to help shoot you through the gate. It feels great in transitional turns, but here in the slalom, it sometimes makes a “push me, pull you” experience. 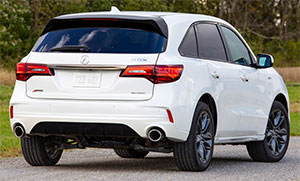 Steering weight, and feedback through the wheel, noticeably changes throughout as well. After a slight hesitation off the line, this MDX takes off with a real urgency; taking us to 60 in just 5.9-seconds.

The engine sounds strong, with a nice amount of powerful growl seeping into the cabin. Shifts are quick and firm, and the engine spends a lot of time right in the heart of its power band. Ultimately, the ¼-mile ends in 14.5-seconds at 94 miles-per-hour.

Fine panic braking stops of just 111-feet from 60. No fade to speak of, and a nice firm pedal provides plenty of feedback and confidence.

It’s a nice looking package that while sporty, doesn’t detract from the techy-luxury theme that Acura portrays so well.

Spaciousness and comfort are evident throughout the interior, and cargo space aplenty; 15.0 cubic-ft. behind the 3rd row, 38.4 behind the 2nd, and 68.4 with all seats folded. 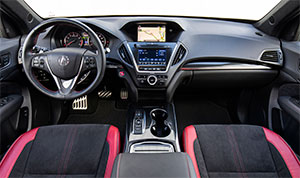 The twin-screen setup was perhaps a bit ahead of its time when first deployed by Acura; but it looks dated compared to what most rivals are offering these days, and it was never the most user-friendly system to begin with.

But MDX changes for ’19 are not all about the A-Spec. In addition to the transmission upgrade, the Sport Hybrid’s Active Damper System is now available for non-hybrid MDXs as part of the Advance Package; and of course a few new color options, including this A-Spec specific Apex Blue Pearl.

The luxury-oriented interior trims get some new wood finishes; and more standard content. The auto stop/start system has been refined as well, and is now standard on all MDXs.

This current generation MDX has been on the road for 5-years now; but it barely resembles where it started, as Acura has been tweaking away at it ever since. That constant fine-tuning is a big reason why the MDX remains so popular, and why it has more than its share of fans around the water cooler here.

Government Fuel Economy Ratings are 19-City, 25-Highway, and 21-Combined.  Our average, a fine 21.8 miles-per-gallon of Premium. The Energy Impact Score is about average, with consumption of 15.7-barrels of oil annually, and C02 emissions of 6.9-tons.

Not out of reach by any means, the A-Spec is priced right in the heart of the MDX lineup, starting at $55,795, and that’s with Super-Handling-All-Wheel-Drive.

A-Spec may not yield a true performance model, but the Acura MDX was already more capable than most rivals. This 2019 A-Spec just adds a sporty, finishing touch that was needed to complete the already impressive MDX package.