Ever since the NSX made its return to the Acura lineup for 2017, Acura has been trying to sprinkle a little bit of its exotic magic throughout their lineup. So next up on that checklist is the 3rd generation of their compact crossover RDX. Let’s see what precision crafted performance adds to this already popular choice.

The first Acura RDX was a bit ahead of its time when it arrived for 2007. Not only was it one of the first luxury compact crossovers, but it arrived with a 4-cylinder turbo engine and a healthy dose of performance. When the 2nd generation arrived, it seemed to reverse course, showing up somewhat bloated, bland, and packing a V6. Today, it’s all about turbo-4s; and sport utilities that handle better than sport sedans did a decade ago. So, the 2019 Acura RDX goes back to its roots, to now join the pack.

Sporting a requisite 2.0-liter I4 turbo with 272-horsepower, the new RDX gets a big boost in torque, 280 lb-ft.; that’s 28 more than last year’s V6, feeling just as energetic from a standing start.

There’s also a new paddle shift 10-speed automatic trans, and of course optional all-wheel-drive, which is the latest version of Acura’s Super Handling All Wheel Drive. 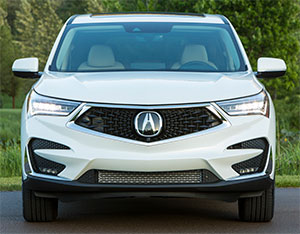 This new RDX boasts a decidedly different look, though not so different that it doesn’t include current Acura signatures such as their diamond pentagon grill and jewel eye headlights.

Exterior dimensions have increased, including 2.6-addtional inches to the wheelbase, which is a significant step up; and allows for a much more aggressive, yet trimmer look outside, while still giving the interior designers a lot more room to play with.

Riding on an all-new platform with as yet no Honda brand counterpart, the suspension setup is MacPherson struts up front and a 5-link independent rear. The four available drive modes include adjustments to the adaptive suspension, with Sport+ making things the most responsive.

The ride certainly firms up as well, to the point we’d put Sport+ in the “occasional use only” category. But really, it’s the SH-AWD that’s still the star of this handling show. Turn-ins are very quick; and you really have push hard to approach this ute’s limits. 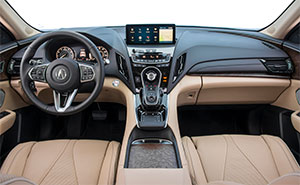 Technology is always a key Acura attribute, and there’s plenty to showcase here. Gauges are clear and comprehensive; and a 10.2-inch dash-top HD LCD display screen, is the centerpiece of a new user interface.

But it’s strictly hands off, as you must use a console touchpad for inputs. It seems overly complicated and there’s a definite learning curve. Fortunately, they haven’t gone overboard, as there are still manual controls for the basics.

There’s plenty of storage everywhere inside the NSX-flavored cabin, thanks that additional wheelbase; and the sportily adorned seats are as, if not more, comfortable than before. A panoramic sunroof is standard. 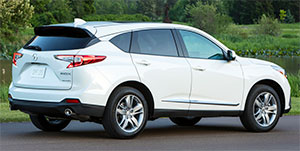 Government Fuel Economy Ratings with front drive are 22-City, 28-Highway, and 24-Combined; all numbers one less with all-wheel-drive, at 21-City, 27-Highway, and 23-Combined. So, it’s an average Energy Impact Score, burning 13.7-barrels of oil yearly, with C02 emissions of 6.1-tons.

The spirit of the NSX does indeed exist in the 2019 Acura RDX, as it has returned to where it started only better; bringing equal parts high-performance and high-technology, plus Honda-design reliability, to the luxury compact utility scene, without leaving the practicality or comfort behind. That formula was central to the original RDX. And while timing may not have been perfect then, it couldn’t be more perfect now.