Since the Audi A7 debuted here in the states for 2012, it has sought to combine the spaciousness of a sedan, and the versatility of a hatchback, with the stylishness of a coupe. That’s a tall task for any one car; but by all accounts, it succeeded, and looked great while doing it. Well, there’s a new A7 on the streets. So, let’s find out if it can build on that success.

Who says Americans don’t buy hatchbacks? Stop by any country club, and you’re bound to see a Porsche Panamera or two; not to mention lots of luxury crossovers, which are at their essence, just all-wheel-drive hatchbacks. It also helps if you call it somethings else, like this 2019 Audi A7, which Audi calls a 5-door coupe.

That sounds pretty sporty and exciting; and truly the A7 is a real looker.

The rising beltline and sloping roof come together in a thick d-pillar to provide the coupe-like proportions. While the expressive face and linear rear, follow recent Audi themes.

It’s a cohesive and fantastic-looking design, that definitely sets it apart from the traditional luxury sedan field. 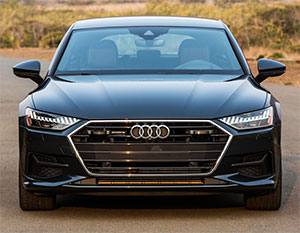 As does the powertrain, a 3.0-liter V6 turbo that sends its 335-horsepower and 369 lb-ft. of torque to all four wheels through a 7-speed S tronic dual-clutch automatic transmission. Like the A6, that of course shares this same platform, it also gets assistance from a 48-volt mild hybrid system.

Put to use at our test track, it helped shuttle the A7 to 60 in just 4.8-seconds. Quattro all-wheel-drive, as well as launch control, provide a slip-free, high-grip, no drama getaway.

Excellent power throughout the ¼-mile; feeling smooth and strong as the engine continuously pulls, while the transmission fires off steady, quick shifts. Our best time, 13.4-seconds at 104 miles-per-hour.

If you’re in an even bigger hurry, keep in mind more powerful S and possibly even RS versions will likely be added to the lineup.

At 4,300-lbs., the A7 is no lightweight, and there’s also over 115-inches of wheelbase to deal with; yet, good overall balance, quick steering, and prodigious traction allowed us to really hustle through our cone course. 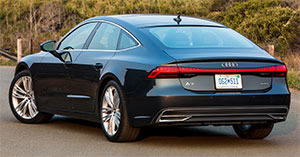 There’s not as much feel through the wheel, or the kind of chassis feedback we expect in a true sport sedan; but for a large, luxury-minded car, it’s quite impressive.

You’ll get the best in Dynamic mode naturally, but we found it a little harsh on the street. Here, Comfort or Auto are much better options; and as is typical with Audi, all three modes drive very distinctive, not just a simple heightening throttle response or increased exhaust note.

A panoramic sunroof is standard on the A7, and really lightens things up in the cabin, giving it a much different feel than the A6.

A great layout, impressive interior refinement, and plentiful high-tech are also hallmarks of recent Audis. That continues here, along with great comfort for the driver and all passengers.

Of course this sportier styled version of the A6, does come with some downfalls; mostly loss of headroom for rear seaters, but for us it was not a deal breaker. 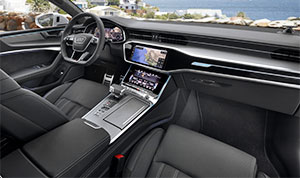 And additional room for hauling things is the added benefit; 24.9 cubic-ft. in the cargo area, compared to the A6’s 13.7 cubic-ft. of trunk space. A power operated hatch is standard.

But, there’s certainly no arguing that there is a wealth of customizable information provided in both the upper 10-inch touchscreen, as well as in the digital cockpit right in front of the driver.

Being a German luxury car, plenty of safety systems are available; including Audi pre sense 360 with emergency braking to stop you, and collision avoidance assistance to potentially steer you around hazards.

Government Fuel Economy Ratings are 22-City, 29-Highway, and 25-Combined; our average, an acceptable 24.5 miles-per-gallon on Premium.

Despite the full redesign with more standard content, owning an A7 will actually cost you less than last year at $68,995 to start, or about 10-grand over a similar fitted A6 sedan.

So, if you’re looking for something different than your typical luxury four-door, but don’t want to follow the herds over to the SUV pasture, the 2019 Audi A7 combines great styling, mostly-terrific tech, and impressive road manners, into a somewhat unique animal that’s really worth considering.