There’s another fully electric SUV on the market, and this time it carries a familiar name. It’s the Audi e-tron. We’ve seen e-tron concepts at auto shows for years, and now one is finally a reality. But, with so many great SUVs already in the Audi lineup, is now really the smart time to flip the switch to this Audi EV?

It took a while for the EV and SUV marriage to happen; but now that it has, we going to see new ones arriving with regularity. The latest EV SUV entrance is this 2019 Audi e-tron.

On the Audi scale, it falls just above the Q5 midsize utility, and below the 3-row Q7; similar in size to the flagship Q8.

Using much of the same approach as Jaguar has with the I-Pace, Audi made the e-tron just about as normal as possible compared to other SUVs.

In fact, many of the specs are very similar to the Jag. Like the twin-motor setup, with one up front, and one in the rear for all-wheel-drive. 402-horsepower and 490 lb-ft. of torque is max output with Boost Mode engaged. 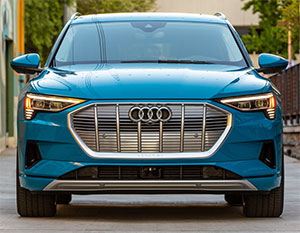 The rear motor is slightly more powerful than the front, giving it rear-biased quattro; just like most of the rest of the Audi lineup.

With a 95kWh liquid-cooled battery, its range falls short of the I-Pace, at 204-miles; with MPGe ratings of 74-City, 73-Highway, and 74-Combined. For a near perfect Energy Impact Score of just 3/10ths of a barrel of annual oil consumption with no CO2 emissions.

Though Audi claims their regen braking system can add quite a few more miles onto your tally; and that’s exactly what we experienced. We saw a real range of about 220 miles on a cool fall day, and that’s without any hot shoe driving.

Audi also sees getting you back on the road as quickly as possible, just as important as the size of the battery. Its 150-kW DC fast charge capability adds at least 160-miles of range in a 30-minute time frame. Even on household 240-current, it takes just 9-hours for a full charge.

Physically bigger, yet on a shorter wheelbase than the I-Pace, the e-tron is indeed more SUVish looking.

It’s also fairly true to its original concept vehicle; though traditional side mirrors replace the concept’s virtual ones. The e-tron rides on 19, 20, or 21-inch wheels. 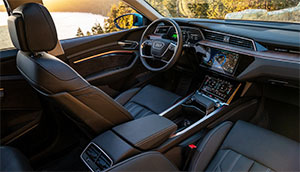 Space inside for driver and passenger also rates similar to the Jaguar, but feels more open. There’s also more room for cargo, with 28.5 cubic-ft. of space expanding to a max of 57.0 cubic-ft. with the rear seats folded. And the e-tron can tow up to 4,000-lbs.

Very familiar Audi ambiance inside, with two large touchscreens dominating the center stack. Minimal special learning curve really, as you put things into motion with a not always intuitive slide of shifter-like switch.

Audi’s digital cockpit was already a favorite of ours, and unique EV features for the e-tron make it even more so.

Underway, it feels very creamy yet also very powerful, and near silent. Throttle response is immediate yet not jolting. Lots of grip for cornering, with a very stable platform, as over 1,500-lbs. of battery lie low in the chassis.

Other than some numb steering feel, the e-tron felt quite capable and composed through our cone course. 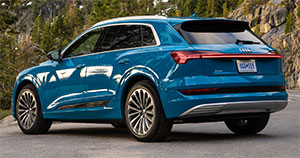 Hills, mountains, not a problem with all that torque. Does wonder in the straight-line as well, hitting 60 in just 5.2-seconds, with boost mode engaged of course.

It’s not as breathtakingly fast as some EVs, like the Tesla Model X, but with no shifts, or breaks of any kind with all of that torque; it’s still an exhilarating experience, as the e-tron streaks to the end of the ¼ in 13.9-seconds at 100 miles-per-hour.

It can do off-road type stuff as well, with 3-inches of ride height variance due to the standard air suspension; and its batteries are fully protected underneath.

Base pricing of $75,795 may keep the e-tron more in the early adopter class, but that’s certainly not out of line for a luxury SUV these days, and government tax incentives are still in play for many as well.

It seems only fitting that Audi’s first full EV would be an SUV, as EVs merge further into the luxury mainstream. The 2019 Audi e-tron is less of a science project, and more of a fantastic automobile; and well, it doesn’t get any more mainstream than a premium crossover these days.

So, if you’re a family looking to go electric, it’s a great choice. If range remains an issue, then Audi has a lot of other fine gas powered SUVs that will fit your bill.