When the Audi Q3 arrived here in the states for 2015, it was midway through its 1st generation, a design that was conceived with mostly European tastes in mind. Well, that didn’t seem to matter, as sales quickly took off. Now a 2nd gen arrives, with a more American tilt in character. So, is a bigger Q3 a better Q3?

That’s right, the 2019 Audi Q3 is first and foremost, bigger. Which, in our experience, isn’t automatically a good thing. But in the Q3’s case, the extra interior space is much appreciated; and along with the high quality feel of bigger Audis as well, this should help it stand out in what is an intensely competitive small luxury crossover market.

There’s a heavier tech. vibe, too. A 10-inch digital instrument cluster is standard, 12-inch optional. Functionally, it’s still not our favorite setup, with the MMI touch response system having a bit of a learning curve; and there’s an awkwardly-placed volume knob that seems to have been an afterthought.

But the driver oriented space in front is quite comfortable. It graduates from subcompact to compact roominess with style and grace. Other highlights include a standard panoramic sunroof and heated power seats; as well as plenty of available trim options, comprising matte-finish natural wood, and a Sport Package that adds brushed aluminum inlays, sport seats with contrast stitching, and a 3-spoke steering wheel with paddle shifters.

All that added space comes with a longer wheelbase; up 3-inches to 105.5.

The result looks quite nice. Whereas some rivals try to look as daunting and sporty as possible to attract younger buyers, the Q3 takes a classier approach that suits it and the Audi brand well.

Though not entirely omitting the sporty, as S Line adds athletic touches such as unique bumpers, side sills, and 19-inch wheels, with 20s optional.

Ironically enough, it looks more like Audi’s flagship Q8 than other utilities in their lineup.

Whether scooting about town, hitting the highway, or twisting your way through the countryside; the Q3 remains quiet and comfortable; feeling quite composed for a small utility. 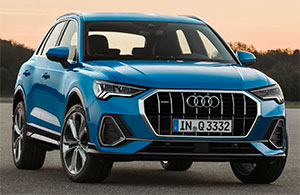 Power comes from an updated version of Audi’s 2.0-liter I4 turbo. There’s 28-horsepower more than before, as well as 51 additional lb-ft. of torque. That makes the totals 228-horsepower and 258 lb-ft. Quattro all-wheel-drive is now standard.

Though, hopefully you’re still not in too big of a hurry. Track test results were not quite as sporty as we may have hoped. It mostly comes down to a definite delay for power to arrive once you ask for it. It took us 7.4-seconds to hit 60.

Once underway, things improved a little, but the traditional 8-speed automatic is also part of the problem. Not that it’s a bad transmission, but shifts just feel a tad clunky. Our best ¼-mile was 15.6-seconds at 90 miles-per-hour.

But, with that power being diverted around by quattro, as well as with the help of selective braking; the Q3 feel still more athletic than most in its class. It’s no GTI, but it does share a platform with it, along with its 5-link independent suspension, front and rear. 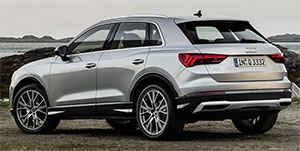 The Q3 is 1½-inches taller than before, but it doesn’t feel any top heavier. Soft, yes; but body roll is not out of line by any means.

And, just 97-feet is all it took to bring us to a halt from 60, though we did experience some fade after a few runs.

Audi didn’t skimp on the safety stuff. Their camera-based pre sense collision avoidance is standard; while adaptive cruise control with stop & go, lane keep, and even a top view camera system all are available.

Government Fuel Economy Ratings are 19-City, 27-Highway, and 22-Combined; our highway-heavy average was a great 26.1 miles-per-gallon of Regular. That’s just slightly better than average for the Energy Impact Score; 15.0-barrels of yearly oil use, with 6.6-tons of CO2 emissions.

Priced quite appropriately for the segment, a base Premium Q3 starts at $35,695, with standard all-wheel-drive. Top Prestige trim begins at $43,895.

So, to answer our original question; yes, a bigger Q3 is a better Q3. But more importantly, the 2019 Audi Q3 is about more than just more space. It’s a tech-heavy and lavishly comfortable yet still practical small utility, that the rest of the segment will have to deal with for some time to come. Now we can debate all day long about the merits of pricy crossovers taking over the luxury landscape; but with the practicality, technology, and overall driving experience of vehicles like this Q3, it’s getting harder and harder to argue against making the switch.