While it will probably be overshadowed by this Bentayga crossover in due time, it’s the Continental GT coupe that has championed the reborn Bentley brand so far this 21st century. And now, it’s time for a 3rd generation of the car that put the “flying b” back on the map.

Owning a car like this 2019 Bentley Continental GT, is an experience that relatively few people will ever be able to do. But, just seeing these beautiful beasts roaming their natural habitat, is a rewarding automotive experience all on its own. Fortunately for us, we get to do a whole lot more than just look.

Since it arrived for 2004, there have been numerous updates over the two previous generations of the Continental GT luxury coupe. But, up until now, it rode on Volkswagen’s D1 chassis. And while those underpinnings were truly fantastic; it was time for some “out with the old, and in with the new”. Now it’s the MSB chassis, that has much in common with the Porsche Panamera. 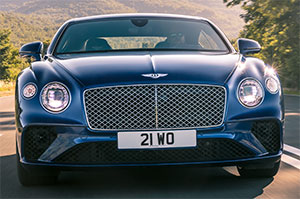 Also, while its standard all-wheel-drive system was 60/40 rear-biased before, the Continental’s new active system operates mostly in rear-wheel-drive fashion, calling on the front wheels only when needed.

Likewise, the transmission, which was a true 8-speed automatic before; is now a dual-clutch design. Engineers were hesitant to go that route prior to now, due to what they felt was a lack of overall smoothness. They think that time has arrived and we have to agree, shifts are lotion-like; yet can be aggressive when the time is right.

And rest assured, the interior is just as exquisite as every Bentley before it. Making you not want to get out of it when you arrive; or even pondering taking the long-long way around to put off getting there.

There’s plenty of the technology that today’s luxury buyers insist upon; yet the GT still has a driver’s car feel to it, even to the point of including a disappearing infotainment screen, that allows you to bring up a row of analog dials in its place. 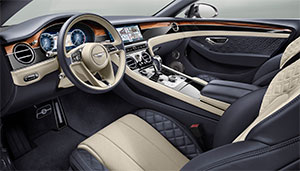 Swinging this sledgehammer at our test track, we smashed the 0-60 in 3.7-seconds. Power pours out of this thing like water over Niagara Falls, smooth at the top end, downright violent at the bottom. Still, it’s an easy launch, with a rational amount of traction.

Shifts are hard and fast, with minimal power loss. Yet, the 11.9–second ¼-mile trip as a whole, is still the smoothest way to get to 119 miles-per-hour than anything else we’ve ever driven.

That W12 still causes the GT to be overly front heavy. So, if a livelier experience is what you’re looking for, you might want to wait for the anticipated V8 to arrive.

The standard air suspension does allow for some roll in corners, to keep the sensation natural, instead of feeling artificially flat. But there’s close to 5,000-lbs. to deal with here, so the Bentayga’s 48-volt active anti-roll bar system is there to help as well.

Stylistically, it’s not a big departure from before in any way. It’s perhaps a little more athletic looking; and those exaggerated hips of the original have become even more pronounced. It looks fantastic sitting still from any angle, but appears even better in motion, going down the road like it owns it.

As for pricing, well it is a Bentley, a fantastic one at that, and the smoothest riding, most luxurious Grand Tourer you can buy. So, putting it that way, $219,925 shouldn’t cause anyone to faint.

According to novelist George Orwell, all animals are equal, but some animals are more equal than others. Now, you may never get to drive your 2019 Bentley Continental GT over an Alpine pass on the way to your chalet, but it has a way of turning every driving occasion into an event that’s just as rewarding. And for discerning well-heeled luxury coupe fanciers, there is really no equal.