There’s no getting around it, BMW just does things a little bit differently than everyone else. And that’s no different when it comes to plug-ins, with offerings that range from the humble i3, to the supercar i8. Let’s see if the “i’s” have it.

The i8 Coupe streaked its way onto the automotive scene for 2015; not only helping to launch BMW’s i electric-based sub-brand, but ushering in a whole new era of plug-in performance cars. For 2019, the i8 advanced hybrid gets some updates, as well as this even flashier Roadster version.

But a powertrain refresher is in order first. Centrally chassis located is an 11.6 kWh lithium-ion plug-in battery pack.

It allows 141-horsepower, up 12 for ’19, due to more efficient battery cells, from the electric motor driving the front wheels. As before, the rear wheels are driven by a 1.5-liter I3 turbo gasoline engine. Total output is now 369-horsepower. 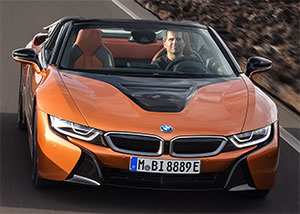 You can expect about 18-miles of EV-only driving, and the typical drive modes allow you to choose when to deploy it, or you can let the car decide.

The most notable new addition is of course this Roadster body, with its power-operated cloth top. It takes just 16-seconds to neatly fold into a new storage well almost directly behind the seats. Occupying roughly the space where the rear seats are in the Coupe.

Not to worry, doors still swing up and away easily; allowing good access, as well as providing the wow factor for that grand entrance when you arrive.

No other major changes inside, save for some new storage areas where the rear seats were; and new carbon-fiber trim, which oddly enough, wasn’t an option before.

With an added 170 pounds of weight, the Roadster does get some unique suspension tuning; but not that you’d notice, as it cuts through cones just as capably as the Coupe, with essentially zero body roll. Thanks to an ultra-rigid carbon-fiber and aluminum structure. 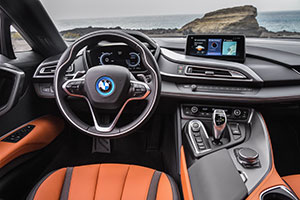 While we’d like a little more feedback, the steering has a good weight to it. The i8’s tires are relatively narrow for such a high performance car, but we still found plenty of grip… and grins as well. With launch control engaged, the i8 leaps off the line with refined aggression; hitting 60 in just 4.1-seconds. That’s 3/10ths quicker than we achieved in the coupe.

Despite its supercar looks, and near supercar performance; away from the track, the i8 behaves more like a graceful grand tourer. It’s not intimidating, as it’s easy to drive and even easier to love.

Government Fuel Economy Ratings are 27-Combined MPG, and 69-Combined for MPGes. We plugged in whenever possible, and got an impressive average of 73.5 miles-per-gallon of Premium.

That’s a great Energy Impact Score of 7.1-barrels of yearly oil use and 3.2-tons of CO2 emissions. 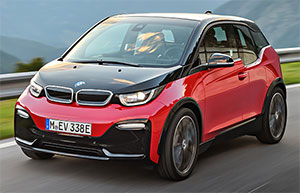 Too rich for your blood? Well, BMW has another option for you, the i3, and there’s much to talk about here as well.

As before a 647cc twin gasoline-fueled Range Extender generator is available.

The i3s’ extra oomph was immediately noticed at out test track. After a somewhat tentative launch, the power floodgates opened and we hit 60 in just 6.9-seconds; a full second quicker than we achieved back in 2015.

For such a tiny car, there’s great stability throughout the ultra-quiet 1/4-mile; wrapping it up in 15.5-seconds time, at 90 miles-per-hour. 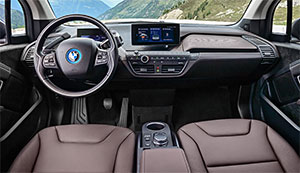 Now as for its range, there’s even better news. For 2019, there’s a larger 42.2-kWh battery pack that boosts EV distance from 115-miles to a claimed 153. With the Range Extender, one should easily manage over 200 miles per charge and fill-up.

So, whether you’re looking for grand touring luxury, wrapped in the exotic experience of the BMW i8 Roadster and Coupe; or a sporty city car, now with the i3s’ extra performance kick, BMW has you covered. Performance and efficiency, delivered the way only BMW can do it; the i’s have it indeed.