These days everything is a competition. You can’t just be good at something, you have to be the best at it, or at least claim to be, to get anyone to pay attention. Well, BMW has been the best at quite a few things over the years, and fans know BMW delivers their best in their M competition models. So, let’s hit the track in their hottest 2 series and see if its a win-win for one and all.

When we tested the new for ‘16 BMW M2, we called it a mini beast of a performance car that was the closest thing we’ve driven to a proper M3 in some time. Three years later, and we’re here at Roebling Road Raceway with a 2019 M2 Competition; that same car, only cranked up to 11.

Not surprisingly, comp. spec starts with more power from its inline-6 engine, but it’s not a souped-up version of the M2’s turbo-6 motor, rather a slightly detuned version of the M4’s twin-turbo unit. Output is 405-horsepower, up 40 from the standard M2; with 406 lb-ft. of torque.

More power always requires additional cooling, so the Competition gets more airflow through its kidney grilles, so a revised front fascia with larger intakes. 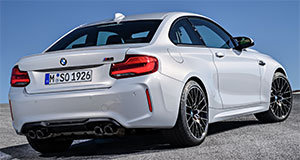 Black trim is also part of the package, as is a quartet of black chrome exhaust tips.

More whoa-power is next, larger brakes front and rear, sporting a gray finish on the calipers.

Suspension tweaks include more parts from the M4; and the steering system, rear differential, and electronics have all been upgraded. 19-inch wheels complete the set, wearing 245/35 Michelin Pilot Super Sports up front, 265/35s in the rear.

You get more control over everything as well; with extra adjustments on the console, and a pair of M buttons on the steering wheel for saving two separate setups.

New sport seats are in place; but otherwise not much changes inside, save for some new M2 Competition logos and colored stitching.

You can still send power to the rear wheels with a manual transmission, but most will come equipped with this 7-speed M-DCT, which includes steering wheel mounted paddle shifters.

Gauges remain virtual, but are sharp and very easy to monitor at speed. 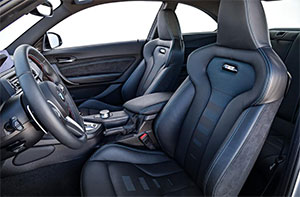 On this frigid day we struggled a little for traction to put all of that go-fast hardware to use, getting off the line a tenth slower than our last M2; hitting 60 in 4.3-seconds.

But, we made up for it once we got rolling, as our 12.6-second ¼-mile time was 2/10s quicker than before; finishing at 115 miles-per-hour. Redline is at 7,600 rpm, and it gets there in a hurry; shifts are hard and fast, making for an exhilarating experience.

Hitting the full track, we did have high expectations. And even with that, this M2 was still able to impress. It’s a deceptively quick, tight-feeling, competent, and tossable car.

Driving deep into the corners, not a problem. It’s well planted, with plenty of grip to put the power down, too; exiting with just the perfect amount of wheels slip to rotate the car without losing momentum.

Not much learning curve, just hop in and start hammering around the track; there’s enough feel and feedback here to get a good sense of things fairly quickly.

The upgraded brakes worked very well; no matter how late we braked, or how hard we got on them, we came away thinking we could have waited a little bit longer.

For such a high performance machine, it is very confidence inspiring, and so well balanced it could easily handle even more horsepower. But, then of course, you’d be in M4 territory.

Top speed is 174 miles-per-hour, if you add the optional M Driver’s Package; which also gets you a one day BMW driving school, to learn how to get the most out of your new M.

Getting competitive with an M2 will cost you $59,895 for starters. And, for those of you that think this is what the M2 should have been from the get-go; BMW agrees, as this is the only M2 available for 2019.

So essentially, BMW applied a mid-cycle refresh to the M2, tacking a sort of suffix onto it, with enough mechanical change to quickly get our attention. And the strategy worked. We enjoyed the heck out of testing this 2019 BMW M2 Competition. Making a great car even greater. In fact, the only competition this M2 is in, is with itself.