Whether you have fond memories of the original 1990 BMW 850 coupe, or just know it only from Will Smith’s “gettin jiggy with it”; BMW’s high-end luxury sport coupe has been missing from the U.S. lineup for 20-years. Well, it’s back, and dare we say, more alluring than ever!

Yes, the iconic 8 Series Coupe has returned. Now known as the 2019 BMW M850i xDrive Coupe, there’s no V12 or 6-speed manual transmission this time around, as most of the hardware is from other parts of the current BMW lineup.

Starting with the 4.4-liter twin-turbo V8 engine, though BMW says it has been heavily revised for deployment in the 8. It’s rated at 523-horsepower and 553 lb-ft. of torque. That’s significantly more than in the M550, but less than the raucous M5.

An 8-speed automatic to go along with it of course; the Steptronic Sport transmission has also been revised with wider ratios, and quicker shifts between them. 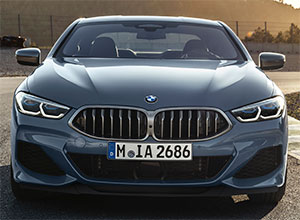 The tranny also uses GPS data to make sure you’re in the proper gear for hustling through corners or approaching stops.

Standard xDrive all-wheel-drive here, operating almost exclusively in rear-drive normally; but can instantly divert power forward if it predicts loss of traction, or if it sees a performance benefit.

Handling is precise, and the car well-poised for 4,500-lbs. of luxury coupe. Even when pushed harder at our test track, the 850 seemed to get smaller and smaller, the harder we pressed it.

Nothing exotic per se, about the double-wishbone front and 5-link rear suspension, but it’s been well-tuned by people who are known to be awfully good with this stuff.

Adaptive M Suspension with Integral Active Steering is also included. They work together, mostly seamlessly, to continuously monitor damping and steering response to give you the desired driving experienced based on your selection of Sport or Sport+.

Still the ‘8’ can be a handful at times, as super snappy turn-ins make oversteer an all too real proposition, but it stays remarkably flat no matter how aggressive you are with it. So, stay alert!

But all that doesn’t hold a candle to going full throttle in this luxo-beast. Even with summer temps close to 100, head-snapping power at launch makes this rocket capable of 0-60 in a scant 3.5 seconds. Top Speed? 155!

Indeed firm, aggressive shifts keep the power pouring on, and the engine sounds surprisingly like pure American beef. It even feels like a Corvette streaking down the track; a very well-planted all-wheel-drive one, that is. And at the end of the straight, it’s just getting started.

You don’t have to know a Hofmeister Kink from a “floating roof” to agree that this 850 is beautiful.

Truly a mix of BMW hallmarks with modern features. The kidney grilles are active, with slats that open and close based on engine cooling needs; while the roof’s central cutout pays homage to double-bubbler roofs of yore. And, you can go all in with an optional unpainted carbon fiber top.

One thing’s for sure, you’ll be in no hurry to get out of this 8. There’s a sporty feel that you expect in a BMW, but there are umpteen luxury touches to go with it.

The wide center console houses the shifter, a host of chassis control buttons, and of course the iDrive controller.

Above, on the center stack, are a good number of manual controls, as well as a wide 10–inch touchscreen; and while not integrated into the dash, it blends in quite well, compared to some of the ginormous screens we see coming out of dashes these days.

And while this luxury GT coupe is not as big of a deal here as it is over in Europe; it certainly is a lifestyle more people would embrace if they had the chance.

Government Fuel Economy Ratings are 18-City, 25-Highway, and 20-Combined. Behaving ourselves, we achieved a good 22.6 miles-per-gallon on Premium. So just slightly below average for the Energy Impact Score; 16.5-barrels of oil consumption annually, with 7.2-tons of CO2 emissions.

Not for the faint of heart, or wallet, this luxury sport coupe starts at $112,895; a convertible version adds about 10-grand.

In BMW’s book of performance, some chapters are more engaging than others; and some draw you in with their beauty and grace only to drop a plot twist on you that you didn’t see coming. This 2019 BMW M850i xDrive Coupe is a thing of power and beauty; and just the kind of plot twist that keeps us coming back for more.