The automotive world today may survive with staples like compact cars, SUVs, and pickup trucks, but it’s the impractical that makes it thrive. The more daring carmakers count on people that are willing to pay a little more for often less; provided it looks sensational, or is an outstanding performer. Both explain the BMW X4. Let’s see if we can clarify things a little more.

In the process making the X4 longer, lower, and wider than before. It’s not all about looks here however, but close to it. There’s one continuous straight line that stretches from the windshield header to rear, giving it the desired coupe-like profile, as well as improving aerodynamics. 19-inch wheels are standard.

As for visibility? Well, other than improving your own, it remains quite difficult to see out of. 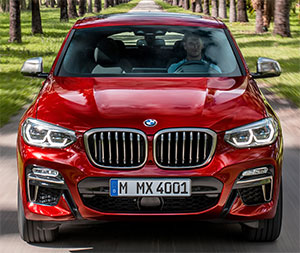 That’s plenty of smooth power to tap into. Slip things in Sport mode, and you’ll get even faster shifts from the 8-speed automatic, as well as a more aggressive exhaust note. For sound relief, try Comfort mode.

The X4 is spirited and willing, on just about any type of road; though ride quality is just short of harsh, getting more and more like the BMWs of yore.

There’s manual gear selecting with both the shifter and steering wheel-mounted paddles; and all X4s sport standard all-wheel-drive. That xDrive system is highly rear biased for best handling, sending additional power forward only when necessary.

Safety features now fall under the Active Guard moniker, and are comprehensive; with the Collision Mitigation braking standard, and the full-slate of BMW’s driving assist systems available.

Now, if you’ve been in any BMW over the last decade the cockpit will look familiar. Being a more premium version of the X3, many items such as navigation with a 10-inch touchscreen are standard. It also works with iDrive of course, or you can just keep your hands off, using BMW’s gesture control.

Seats are sporty and well-bolstered, but with good all-day comfort. With that slick roof, you’d expect rear seat room to be tight, at least on headroom, but it’s better than expected all around. The only compromise is in cargo space. It dives down from the X3’s 28.7 cubic-ft. to 18.5; with a max of 50.5 cubic-ft.

But you won’t be thinking about what you can or can’t take with you when you punch the throttle of this bad boy. 4.7-seconds later you’ll be at 60 miles-per-hour, grinning from ear to ear. 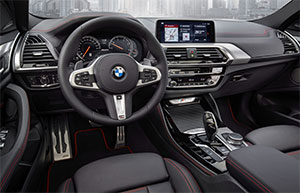 Shifts are fast and firm, and that smooth running six makes all of the right noises as you work your way towards 104 miles-per-hour at the end of the ¼-mile, taking 13.1-seconds.

Riding on a wheelbase that’s stretched about two inches over the X3, as well as with a wider track, the X4 feels super-solid for such a small utility. It was easy to place through the cones, and more than willing to turn in; though numb steering feel continues to be an issue for us.

The suspension setup has been totally revamped, both lowered and lightened compared to the X3; and this M40i takes it even further with M adaptive dampers. There was a little more roll than we expected, based on the taught and stiff ride quality; but nowhere near approaching unsettled territory.  And understeer was minimal.

M Sport brakes are also included, working with precision through a firm, short-travel pedal; as the blue-painted calipers bit down hard on the discs, to bring us to a halt in just 99-feet from 60.

Government Fuel Economy Ratings are 20-City, 27-Highway, and 23-Combined.  So our 23.5 miles-per-gallon average on Premium was just about right on. And that makes for an average Energy Impact Score, with use of 14.3-barrels of oil used yearly and 6.5-tons of CO2 emissions.

If having a less practical version of another German SUV is your cup of schnitzel, get out your $51,445 and head to your local BMW dealer, bring $10,000 more for the M40i.

Point made, BMW; you can indeed make a coupe version of everything. Now, we’ve said it before, that these couped-up crossovers, are only appealing if form over function appeals to you. But, that’s not to say that’s a bad thing; as the 2019 BMW X4 is a heap of fun in a great looking package that surely makes a statement about it and you! And this M40i does it all…in one heck of a hurry.