With so many new crossover utilities on the market, trying to make one stand out from another usually comes down to the details. But rather than focus on extra all-weather ruggedness, or cavernous cargo hauling, Chevrolet’s all-new midsize Blazer adds something no other brand can. The sportiness of a Camaro. So, let’s see if that blazes a new trail worth following.

We have to admit, that when we found out that this all-new 2019 Chevrolet Blazer was not a rugged, rear and all-wheel drive, utility, based on the Colorado truck, we were quite disappointed. After all, Ford has reverted to a rear drive architecture for its new Explorer. But, that’s mostly where our disappointment ends.

No, this new Blazer is for a new, more modern time, looking to take on the recently updated Ford Edge, as well as the reborn Honda Passport, in a resurging 5-passenger midsize crossover field.

Bigger than the Equinox, smaller than Traverse, the Blazer rides on a new version of GM’s front-wheel-drive crossover chassis that debuted back with the 2017 Cadillac XT5; and its closest in size to GMC’s Acadia. 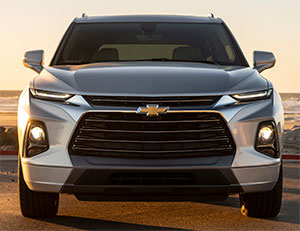 Though, and here’s the fun part, its big and bold front end has it looking much more like the Camaro sport coupe than anything else in the bowtie’s crossover family, and that’s just fine with us.

Both engines get the same 9-speed automatic. But while we like the sporty shifter’s shape, having a rocker switch for manual gear selection is just silly.

The optional twin-clutch all-wheel-drive system is more street performance oriented than made for off-pavement exploring. Torque vectoring sends power to the outside rear wheel to help tighten up turns. Indeed, making the Blazer a sportier handler than most in the segment. Body roll is very minimal despite a 7.4–inch high ride height, aided by 20-inch wheels of our Premier-trimmed tester.

Though the inexpensive-feeling drive mode selector does include at least a sketch of a mountain trail for off-road mode, as well as the ability to lock it into two-wheel-drive. 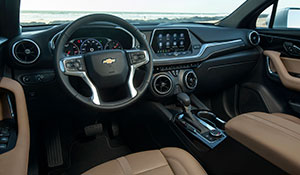 Seats are firmer than we expected, as was the ride quality. Those looking for an even firmer experience can get a Blazer RS, which also gets quicker steering, to further enhance a Camaro-esque feel.

However, our Premier had more than enough interior features to please the typical buyer.  Great flexibility as well, thanks to sliding rear seats, and seat bottoms that lower when folding the seatbacks, for an almost completely flat load floor. And doing so, expands load space from 30.5 to 64.2 cubic-ft.

Gauges are quite comprehensive for a family truckster; just one of many things that highlight what is quite a nice interior for the price point. Items like the power tilt/telescope steering wheel and the high-quality leather, have it fitting in with the Nissan Murano’s near-luxury atmosphere.

The dash continues the Camaro vibe, with even the same low circular central vents that are a throwback to when a/c was an add-on, with a hang-on unit fitted under the dash.

We also like that they’ve placed the start button in clear sight way up high.

Likewise, the 8-inch touchscreen is elevated on the center stack, but still integrated and looking better than those that appear to be just plopped on top. 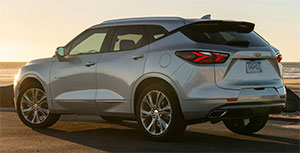 The sporty feel carried over to our test track, where this Camaro… err… Blazer ripped through the cones with ease. The chassis feels firm and responsive, with very manageable amounts of body roll; though we found the traction nannies a little too eager to step in at the first sign of understeer.

The V6 puts the power down quite effectively as well, with a pretty aggressive throttle response. 6.2-seconds for a 0-60 run is much better than most rivals, and close to the Ford Edge ST.

Continuing through the ¼-mile, shifts are quick and steady, ending the proceedings with a time of 14.8–seconds at 94 miles-per-hour.

Government Fuel Economy Ratings are 18-City, 25-Highway, and 21-Combined for an all-wheel-drive V6. We averaged a fine 22.7 miles-per-gallon of Regular. Still, it rates a worse than average Energy Impact Score, consuming 15.7-barrels of oil, and emitting 7.0 tons of CO2 annually.

Bringing the vaulted Blazer name back as a crossover, does sting a little, but this is 2019; and a sporty SUV packed with technology and family features is where the premium market is truly at these days. So you can’t blame Chevy for going that route. And if you’re looking for something that is more than just another fine utility, something more like the Camaro of crossovers, this is the one you want.