It was a sad day in December 2011, when the last ranger pickup truck rolled off of ford’s twin cities assembly line. It meant no more ranger for us. Even though the rest of the world continued selling a new ranger. Now finally that 8 year drought is over. Ranger is back in North America. Booming small truck sales is the reason why it’s now rolling off the line in Michigan. Hi ho silver, away!

Yes, the Ford Ranger is back for 2019. And, its return is great news to many people, including the quite a few Ranger fans around the office here.

The now midsize Ranger, rides on a new high strength steel frame, and it is indeed much bigger, as well as more capable than the previous compact Ranger.

Only one engine is available for now, but it’s a good one; under the Ranger’s double-dome hood is the Mustang’s 2.3-liter turbo I4. Updated for truck duty, its rated at 270-horsepower and 310 lb-ft. of torque; enough to pull a best-in-class 7,500-lbs. of trailer through a 10-speed automatic transmission. Which, is controlled by a beefy console shifter with a manual gear change toggle switch. 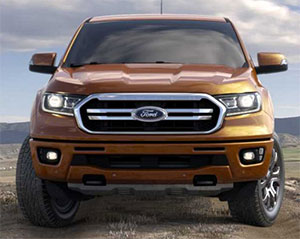 Even with more torque than any other gas engine in the segment, it has the added benefit of class best fuel economy too.

Rear or four-wheel-drive of course; three trim levels include XL, XLT, and Lariat. Both SuperCrew and SuperCabs are available, but with the same overall length, so choose wisely. SuperCabs get a 72.8-inch bed, while SuperCrew bed-length is 61.0-inches; or rounded down to 6 and 5-foot in truck parlance.

As to styling, it looks nothing at all like the compact Ranger; nor thankfully, is it a scaled-down F150 clone. It is its own unique and rather rugged-looking animal. Likely a result of the same basic truck being sold internationally since 2010.

The steeply raked windshield and high belt line add a touch of athleticism. In addition, both Sport and Chrome appearance packages are available to further enhance the sportiness or bling factor.

There are plenty of the driver assistance features, as well as Terrain Management and Trail Control, if you add the FX4 Off-Road Package. You’ll also get unique suspension tuning, skid plates, a locking rear diff., and all-terrains on either 17 or 18-inch alloys.

Inside, you won’t find a bench seat up front anymore, but you will find more room and conveniences than ever. 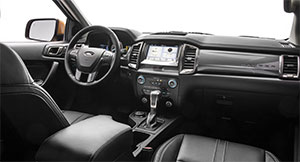 An 8-inch touchscreen is available for SYNC3; and just below, are plenty of decent-sized manual controls. While over in front of the driver is your choice of two different gauge displays with either single or dual LCD productivity screens.

Rear seats, even in the SuperCrew, are tight for adults as is typical for the segment, but more than adequate for the kids. Flip up the one-piece seat bottom for a pair of storage bins.

Compared to the smooth running Chevrolet Colorado and rough-and-tumble Toyota Tacoma and Nissan Frontier, Ranger ride quality finds somewhere on middle ground. Not unlike the F150; it’s solid, but comfortable, with a very compliant suspension in both 2 and 4-wheel-drive.

Powertrain operation is quite impressive. Plenty of power on tap whenever needed, and this is the best application we’ve sampled yet, of a 10-speed transmission. Shifting is almost seamless, and boost from the turbo keeps it from having to drop a bunch of gears every time you call for more oomph.

We got some quality off road time as well, during our first drive in and around San Diego. The Ranger can be quite a beast. Off-road aids trickle down from Ford’s Raptor, and the Ranger’s steel front bumper means there’s less plastic to break when the going gets rough.

Throttle action is very aggressive, with the Ranger lurching forward as soon as you lean on the gas.

Pricing starts very reasonably at just $25,395 for an XL SuperCab, with an additional $4,160 for 4-wheel-drive; ranging through all of the trim and cab styles to top out at the Lariat CrewCab 4X4, which starts at $39,480.

So, yes there’s some price overlap with the F150, but there seems to be more than enough pickup truck sales to go around these days. And without a doubt, this 2019 Ford Ranger raises the bar for the midsize pickup segment. Add in the fact that people have been waiting almost a decade for a new Ranger, and it looks like the Ranger is once again the right truck at the right time.