It’s a great time to be in the market for a pickup truck. Not because prices are down; on the contrary, average transaction prices continue to climb at a rapid rate. It’s because there’s never been a bigger group of recently updated, modern, feature-packed, mega-capable trucks to choose from. And now, you can add an all-new GMC Sierra into the mix.

Much like its platform mate Chevrolet Silverado, the GMC Sierra is all new for 2019, and considerably larger in almost every dimension.

No doubt, it looks big, imposing, and hard to ignore; mostly due to the massive front, with its large chrome-clad grille.

That grille is courtesy of Denali trim, which delivers just about all the glitz you could want in a pickup truck. Accoutrements galore, include genuine wood and aluminum trim, and leather, naturally.

You can upgrade further, adding a sunroof, head up display, and power running boards. Chevrolet’s High Country is not quite this high. 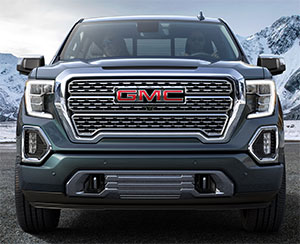 Denali is of course much more than just a chrome explosion, it’s the highest mountain peak in North America. And you’ll feel like you’re climbing it, trying to get into this Sierra’s cabin. These retractable running boards? Yeah you’ll need them, and be prepared to hear a big clunk when they fold in; but you’ll surely enjoy the view from the very high seating position. Seats are firm, yet have good comfort for all day use.

The look of the interior is very familiar; lots of big traditional control knobs and switches will appeal to older buyers, rather than having a central controller or Ram’s gigantic tablet-like touchscreen.

Not that there’s not a touchscreen; an 8-inch one for the infotainment. It’s not the most intuitive system out there, but due to all of the aforementioned controls, you don’t need to use it for the basics. Gauges are still analog, but there is a comprehensive and clear info center as well.

GMC does have a few features not available on Silverado; most notably the MultiPro tailgate. It can fold in 2-stages to create a step for climbing into the bed; or you know, using it for actual tailgating. No traditional latch either, just SUV-like buttons.

The other exclusive, is an available woven carbon fiber bed that is coming but we’re not sure when. 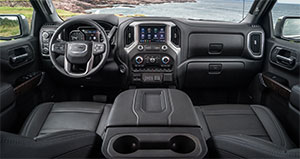 Other trick features include storage in the rear seatbacks; and those running boards have another trick up their sleeves, as they can also move backward to help you access things inside the bed.

As far as full-size trucks go, the Sierra Denali is rather enjoyable to drive, though it certainly does feel big. Not in a clumsy way, but there’s just a lot of width to deal with. But it also has a very solid nature that makes it great for eating up large chunks of highway miles.

You can gobble them up in a hurry too, as going Denali adds the biggest GM V8 available. Capable of towing 12,000 lbs, the 6.2-liter delivers 420-horsepower and 460 lb-ft. of torque; mated to a new 10-speed automatic transmission, controlled by a really old-school steering column-mounted shifter.

Much easier to use are the dash mounted electronic controls for the 4X4 and Traction Select systems.

Leaving everything in auto provided the best launches at our test track, as the Denali leaps off the line with strong V8 grunt. We hit 60 in a quick 5.7-seconds.

Denali-exclusive Adaptive Ride Control is designed to provide a smooth ride, but it seems to settle things in the handling department as well, providing you keep the inputs smooth.

Government Fuel Economy Ratings with 4-wheel-drive and the 10-speed automatic are 15-City, 20-Highway, and 17-Combined. We averaged an acceptable 17.7 miles-per-gallon of Premium.

After starting at $34,995 for a V6, there’s a virtually limitless amount of configurations over 6 Sierra trim levels; the ultimate of which is Denali, starting at $56,195.

They say all things in life are cyclical, and nowhere is that more evident than where we are with full-size trucks right now. In short, they’re everywhere; and it seems we’re circling back to the 60’s, a time when big gas-guzzling American iron ruled the streets. This 2019 GMC Sierra Denali no doubt stakes its claim as one of the biggest, most luxurious ½-ton rides out there. And you’ll get no argument from us.