With the Toyota Prius being synonymous with the term hybrid for just about everyone, it’s often forgotten that the Honda Insight went on sale at about the same time here in America. But while Prius flourished, Honda’s gas and electric history has been full of stops and starts. Well, after a 5-year hiatus, the Insight is back for a third go. Let’s see if Honda has finally hit on the right hybrid formula.

The Insight has been both a triumph and a disappointment for the Honda brand. So, they’re hoping for some “third time’s a charm” magic with the 2019 Insight.

While the 2nd generation Insight lasted just 4-years, it did succeed in bringing a new level of affordability for hybrids.

Still classed as a compact, Honda gives the new Insight a more premium look and feel so they could slot in between the Civic and Accord.  And, for the first time, the Insight is a traditional 4-door sedan. And we think it suits it well, as this is easily the best looking Insight yet, with everything flowing together quite nicely. 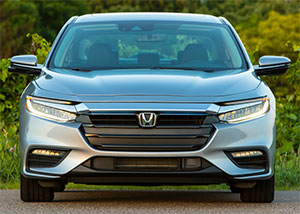 Even base trim gets LED headlights and 16-inch alloy wheels; while Touring spreads the LEDs to the fog lights and turn-signal mirrors, as well as ups wheels to 17s.

Like the Accord Hybrid, the Insight rolls a third generation of Honda’s 2-motor hybrid system. It can operate as a series or parallel hybrid, as well as a full-EV; switching between the three modes as needed.

This improves Government Fuel Economy Ratings for the base model to 55-City, 49-Highway, and 52-Combined; while up-level Touring trim rates 51-City, 45-Highway, and 48-Combined; now all much closer to the Toyota Prius. So, the Energy Impact Score is quite good, burning as few as 6.3-barrels of oil annually, with C02 emissions of 2.8-tons.

No traditional transmission is needed, as the front wheels are driven directly by the electric motors.  Though, at higher speeds, a clutch engages to draw power from the engine as well, through an e-CVT. 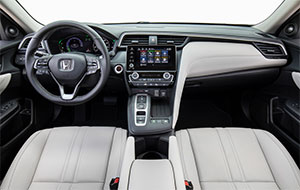 Though now based on the Civic chassis, more aluminum has been used to reduce weight; and additional sound deadening has been strategically placed throughout the body. Stepping up to Touring trim will get you a smoother ride due to a re-tuned suspension that includes liquid-sealing compliance bushings all around.

We found that very little noise seeps into the cabin, helping add to the premium feel; unless you engage Sport mode, at which time it assumes you want to hear more engine noise. But, does anyone really want to hear a 1.5-liter screaming for its life under full throttle? Not us!

Normal and Econ are other drive mode choices, and steering wheel-mounted selectors allow you to adjust the amount of regen braking you want.

While the last generation Insight provided an entertaining drive mostly due to its light and flexible nature; this one delivers that fun with a very solid feel. And, the overall driving experience is certainly sportier than either the Prius or Kia Niro.

Like the Civic, it’s pretty roomy inside; including best in class rear seat legroom.

Due to positioning the hybrid battery pack under that rear seat, there’s a generous 15.1 cubic-ft. of luggage space in the trunk, and full 60/40 split-folding seatbacks.

Up front, everything is familiar Honda; from the Display Audio touchscreen, to the smart looking hybrid-specific gauge display, and the push button e-shifter.

Most safety systems are standard, including Collision Mitigation Braking; EX and Touring trims only adding LaneWatch.

And, for the first time, Insight assembly will happen here in the U.S.; right alongside Civics and CR-Vs at Honda’s Indiana plant.

That’s a significant step up from last generation, but so is this 2019 Honda Insight; though we wonder about only offering it only as a sedan, as 4-door sales on the down low. But, in many ways it completes the recently launched Clarity lineup which includes a fuel cell, plug-in hybrid, and full-EV sedans.

So, the new Insight? Great car, perhaps bad timing; so we’ll see. But, one thing’s for certain, the Insight is back with fully competitive hybrid hardware. And, it even adds an upscale flair giving Honda fans a bevy of choices when it comes to fuel efficient rides.