You may remember the Honda Passport, the Isuzu-based 5-passenger SUV that Honda sold in the 1990s. It was actually their first SUV, until their own CR-V arrived for ‘97. But when Honda’s Isuzu partnership went away, so did the Passport. Well, the Passport is back; and Honda didn’t need any help this time around.

Honda kept it within their own ranks for this 2019 Honda Passport. as it is basically a 2-row version of the Honda Pilot.

Why the Pilot’s capable chassis was not used for a smaller crossover before was always a bit of a mystery.

All of the hardware is pretty much the same, including the identical 111.0-inch wheelbase, although overall length is 6.2 inches shorter. No base 18-inch wheels though, all Passports ride on 20s.

Perhaps in an effort to market it more to the adventure types instead of soccer moms, lots of exterior black trim has been added; and ground clearance is more than an inch higher than the Pilot, when equipped with all-wheel-drive. And indeed most of Honda’s current advertising involves backwoods excursions. 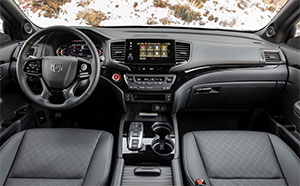 Passport uses Honda’s i-VTM4 all-wheel drive system, with modes for mud, sand, and snow; plenty capable for what most Passport owners will get into.

The same 3.5-liter V6 from the Pilot, delivers 280-horsepower and 262 lb-ft. of torque. But only the 9-speed transmission is available, which means you’re stuck with buttons for a shifter. Similar to the Pilot, tow rating is 3,500-lbs. with front-wheel-drive, 5,000-lbs with AWD.

No 3rd row to store in the cargo area, which means you now have a large underfloor bin instead; it alone holds 2½-cubic.ft.

We’ve spent enough time in 3-row Pilots to know that while not the biggest inside; the comfortable interior holds up extremely well to above average abuse; and we expect the same with the 2-row Passport. 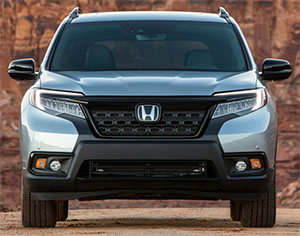 It’s a well-equipped interior too. The available 8-inch Display Audio system allows both Apple CarPlay and Android Auto integration; and gets the added benefit of a good-old volume knob.

All but base Sport trim has a moonroof, heated leather-trimmed seats, and a power liftgate. No 360-degree video monitors, but the standard backup camera does have three perspectives.

Here’s another plus, rear seaters have over an inch more legroom compared to the Pilot.

But whether you’re keeping it between the lines yourself, or letting the Passport do it for you, the ride is smooth and steering quick.

It hustled through our cone course quite well. There is some body roll to deal with, but also quite a lot of grip from the 265/45 Continental CrossContact LX Sport tires. Like all of the other vehicles on Honda’s Global Light Truck platform, suspension is by way of MacPherson struts up front, and multilink independent rear. 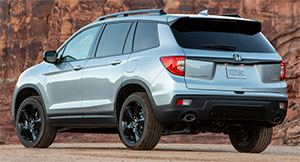 It’s only slightly lighter than the Pilot, so we weren’t expecting a big difference in acceleration performance. But, Honda’s 9-speed has gotten some recent updates.

Indeed, we hit 60 in a fine 6.5-seconds. After a nice, spirited leap off the line, power continued to impress all the way down the track. Shifts are a little lazy, but also very smooth. Our best ¼-mile was a 15.0-second run, at 93 miles-per-hour.

The brake pedal is soft, but results of just 112-feet from 60 are very good; and the Passport was rock solid throughout.

Government Fuel Economy Ratings for all-wheel-drive are 19-City, 24-Highway, and 21-Combined. Our average, a great 24.1 miles-per-gallon on Regular. Passport rates a slightly below average Energy Impact Score of 15.7-barrels of yearly oil consumption with 7.1-tons of CO2 emissions.

Despite fewer seats, but with more standard features, Passport base price is higher than the Pilot by $500, starting at $33,035. All-wheel-drive is a $1,900 option on all trims except top level Elite, which has standard AWD for $44,725.

It only makes sense that a 2-row variant of the popular Pilot now exists. And while it makes a little less sense that it took this long, bringing back the Passport name, and changes to its stance, will make it appeal to a slightly more adventurous buyer. We think the 2019 Honda Passport will also do well against a crowded field that includes the Ford Edge, Chevrolet Blazer, Nissan Murano, Hyundai Santa Fe and others. Yes, we are impressed with the better-late-than-never Passport, and it easily gets our stamp of approval.