Say what you will about the Hyundai Kona, it was the North American Utility of the Year for 2019. So, clearly there is more to this little utility than just cute looks and practical shape. Turns out, a lot more including this full EV Kona Electric.

The Hyundai Kona arrived on the scene for 2018, riding a big wave of media praise; but also scoring a perfect 10 with the buying public. This 2019 Hyundai Kona Electric was part of the plan from the get go; and after spending some time with it, it appears that plan was a very good one.

Most impressively, there was no loss of interior space compared to its gasoline-fueled brethren, as battery storage was accounted for in the original design of the platform; which it shares with cousin Kia Niro.

But that also means, like the Niro, no all-wheel-drive is available. 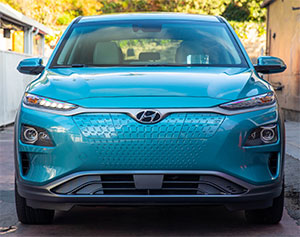 In similar fashion, the Kona Electric is quite pleasant to drive, with good all-around comfort and near-silence; and of course gobs of EV torque are as present as ever.

As for details, there’s a 150-kW motor with a rating of 201-horsepower and 290 lb-ft. of torque. Energy is stored in a 64-kWh Lithium-ion Polymer battery, and typical Level-2 charging takes less than 10-hours; quick-charging can bring that down to less than one hour.

The biggest appeal here is the Kona Electric’s 258-mile range, that’s 134-miles more than Hyundai’s other EV the Ionic Electric. And Government Fuel Economy MPGe Ratings are 132-City, 108-Highway, and 120-Combined. That makes for a near-perfect energy impact score; consuming just 2/10ths of a barrel of oil yearly with no C02 emissions.

Like most EVs, but certainly not all, max torque right from the start makes for a spirited launch. Going full throttle right away, will cause the fronts to spin up quite a bit.

As for suspension, the Kona Electric gets the multi-link rear that comes with the all-wheel-drive version of the regular Kona; as well as unique tuning all-around, to compensate for additional battery weight. 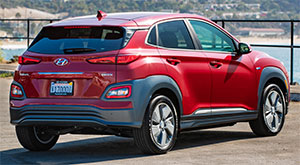 Likewise steering is re-calibrated, giving it quite a different feel; working with the chassis to provide really quick response to inputs.

It is on the softer side of crossovers, but there’s still good feedback, body roll is predictable, and tire-frying torque gets you out of most understeer situations with a playful composure.

As for exterior design of the Kona Electric, there’s a distinctive face with a grille-type pattern replacing an actual grille. The charge port can also be found here. In addition, the fronts of the fender flares have been aero-tuned; and the silver-trimmed side cladding is unique. 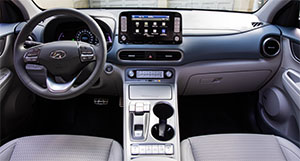 The interior layout is mostly the same as the regular Kona. The most noticeable difference being the lack of a traditional shifter. In its place is a row of buttons on the rising center console.

As much as we loved our time spent in the comfortable front seat; it is in the back seat that you are reminded this is a rather small utility.  It doesn’t feel nearly as roomy as the Kia Niro.

Cargo space also carries over from the non-EV Kona at 19.2 cubic-ft.; maxing out at 45.8 cubic-ft. with the rear seatbacks folded.

The Kona Electric is available in the mid-range trims of the Kona lineup, starting at SEL for $37,995, or about a $15,000 premium over an equivalent gasoline version. But you can still recover some of that with various tax incentives.

The 2019 Hyundai Kona Electric is more than just a plug-in version of a great small SUV. It’s also a more than reasonable entry into the EV arena, as well as a taste of what awaits our driving futures. After all, we know people can’t get enough SUVs, and full electrification is more a matter of when not if. So, with the Kona expertly combining the two into one, it puts Hyundai well ahead of the curve.