Have we finally reached the point where EVs are the present, and no longer just our automotive future? Well, by the sales numbers, we’re not quite there yet! But as more and more EVs emerge from familiar brands, like the jaguar i-pace for example, we’ll soon be fully living in the EV now! So here’s another look at what that reality will look like.

We’ve driven the future more times than we can remember. Well, add another one to that list, this 2019 Jaguar I-PACE crossover utility. Yes, the first fully electric SUV from a traditional car brand has come from Jaguar.

But, this is certainly not your traditional luxury ute. Yes, it does have all-wheel-drive, thanks to a twin-motor arrangement; with both front and rear motors getting equal amount of power from the 90-kwH battery pack that is mounted low in the I-PACE’s all-new chassis.

The two motors combine for a total output of 394-horsepower and 512 lb-ft. of torque. 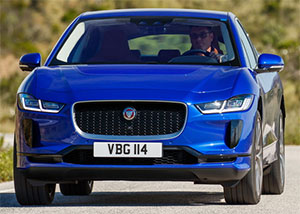 And while its shape doesn’t really resemble a boxy SUV either, its extra-long 117.7-inch wheelbase allows for a big cabin in a small package; one of the many benefits of not having to build a vehicle around an internal combustion engine.

Speaking of looks, Jaguar went to great lengths to keep the family resemblance strong; even to the point of including a traditional grille, although it isn’t needed.

And, what kind of a range does it have? Well, 234-miles is the Government tally, or about the same as the larger Tesla Model X 75D. That’s plenty of distance for going about routine tasks and even most day trips.

Now, fully depleting the battery does require almost 13-hours of charging time with a 230-volt level-2 charger; but DC fast chargers can get it 80% full in just 40-minutes time.

Regen braking, helps extend battery life of course; but unlike some EVs with multiple modes, here you have just high or low to choose from. 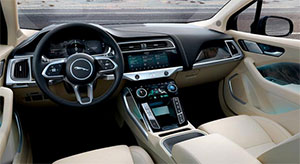 Using your foot, panic stops will take only 112 feet from 60.

Nothing about the interior screams EV, fortunately, as it’s not all that different from the E-PACE. The luxury quotient is high; the I-PACE seemingly wants to coddle you, not shout at you about how it’s an electric vehicle or some sort of techno showplace.

Seats are very comfortable, and there’s 25.3 cubic-ft. of cargo space; expanding to 51.0 with the rear seats folded.

Naturally, it keeps you fully updated on battery status; and depending on what drive mode you’re in, it will help you get the most out of your battery.

Now like most EVs, you do hear suspension noises and other things that are usually masked by engine sounds; but for the most part it’s a quiet and calm driving experience. You can dial up some artificially created engine roars, but we could do without them; preferring to shelter in the serenity that EVs provide. 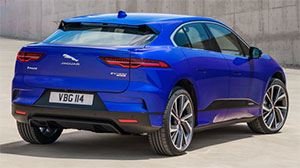 It’s not ludicrously fast, but it will hit 60 in just 4.2-seconds, engaging all of its 512 lb-ft. of torque right from the get go. And once you get used to all of the power that’s easily on tap whenever you want it, driving a gas-burning car just doesn’t feel the same.

No shifting, just 12.9-seconds of unrelenting power as you hit 106 miles-per-hour in the ¼-mile.

Thanks to low mass, good suspension setup, and quick steering, the I-PACE is quite a good handler. Well balanced, easy to whip in and out of cones, as well as maneuver around city streets. In other words, just like a Jaguar!

Indeed, the best complement we could give the I-PACE is that at no time does it feel like just an EV. In fact, it doesn’t behave vastly different from any other luxury crossover we’ve driven lately.

As with any rising technology, pricing is still a major hurdle. And, it’s not that $70,495 is an extreme amount of money for a well-designed luxury vehicle; it’s just there are plenty more choices out there that still burn gas, and cost less.

The internal combustion engine’s days are mostly likely numbered. Sure that day won’t arrive anytime soon, but it did just get a lot closer with the arrival of the 2019 Jaguar I-PACE.

Chances are, Tesla buyers won’t come running, they’ve consumed far too much Kool-Aid for that. But luxury buyers elsewhere, who sample the I-PACE, will be as impressed as we are. As we move from early adopters to the mainstream; it’s a genuinely enticing luxury crossover, that’s whooshing in a new era of EVs.