To say that the styling of the reborn 2014 Jeep Cherokee was polarizing is an understatement. Well for 20-19 Jeep has tried to bring the “love it” and “hate it” folks a little closer together, although technically, the latest Cherokee is just a mid-cycle refresher. Still, there’s much more going on than just a styling mea culpa.

As is often the case, while many reviewers and bloggers gave the car-based squint-eyed Jeep Cherokee a hard time, it has actually done very well for the brand. Even outlasting the Dodge Dart that it was based on, and more importantly bringing many new people into the brand as first-time Jeep owners. The 2019 edition looks to broaden that appeal even more, while also attempting to more endear itself to the Jeep faithful. 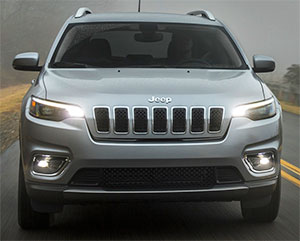 But even with that extra torque, it’s still the V6 that rates the highest towing capacity, at 4,500-lbs; very good for the segment. The 2.0-liter however, does feel incredibly powerful for a vehicle of this size, and indeed it has 80 more horsepower than you can get in a Honda CR-V.

Like the rest of the engines, it works with a 9-speed automatic. But, unlike in earlier versions of Cherokee, the 9- speed is much smoother and more determined in shift points. It makes this Cherokee drive almost like a totally different vehicle.

And no other cute ute in its price class can hang with Cherokee when the pavement ends. There are even 3-different Active Drive 4X4 systems to choose from. Now, some may question the need for all of that, since most Cherokees will never set rubber on anything but asphalt; but it’s a Jeep thing, and Jeep wants to make sure that is indeed still a thing. Opt for the Trailhawk, and its 1-inch of lift, if that is truly your thing as well.

Chief among the updated styling elements is a new front end that falls more in line with Jeep’s upright and conservative past. A new hood as well; and of course updated lighting. There are also some new wheel options, and even better, a lighter liftgate with hands free operation. 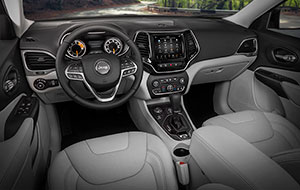 The cargo area has been reconfigured a bit. Space is up to 27.6 cubic-ft. from 24.6; max capacity with seatbacks folded stays about the same, at 54.7.

There’s some upgraded interior trim up front; as well as some new color choices, and the latest version of UConnect.

As for what the new 2.0-liter adds to your get-up-and-go, well it gets to 60 in 6.7-seconds. Not screaming fast, but quick for a utility; and about ½ a second quicker than what you’d expect to get from the V6.

Good snap off the line, great traction, and spirited punch from the boosted 4-banger, which likes to rev up quickly. It sounds eager and sporty as well, while the 9-speed clicks through gears comfortably but directly. The ¼-mile ends in 15.2-seconds at 90 miles-per-hour.

No major changes to the suspension, but we had high hopes that a little less engine weight over the front wheels, would work some magic on the handling side. 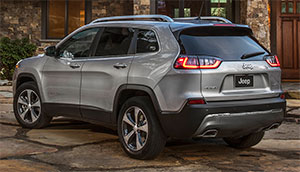 Well, no magic; steering is still slow and understeer present.  But, grip is very solid and body sway minimal for its class.

Government Fuel Economy Ratings for the 2.0-liter with four-wheel-drive are 21-City, 29-Highway, and 24-Combined; though Premium is recommended. That makes for an average Energy Impact Score; using 13.7-barrels of oil yearly, with C02 emissions of 6.1-tons.

Pricing starts at $26,935 for front-wheel-drive, which is a considerable step up from our ‘14’s base price of around $24,000; though that entry level Sport model is no more; leaving the much better equipped Latitude as the new base model. All-wheel-drive adds another $1,500, and things top out with Overland trim at $37,470.

Old style, new style, doesn’t really matter; the 2019 Jeep Cherokee is a wildly popular utility that seems to be attracting both compact as well as midsize buyers due to all of its capabilities. The skin may now be a bit less controversial, but the Cherokee is one adventure vehicle that harkens back to what SUVs were all about from the beginning; go anywhere vehicles that you can live with day in and day out.