There’s no shortage of great small cars to choose from right now. Well, add another one to the list, the all-new Kia Forte. Sure, it had some work to do to, to catch up to the likes of Civic and Corolla, but the folks at Kia have been busy. Let’s see how well their efforts will be rewarded.

This 2019 Kia Forte is the 3rd generation of Kia’s compact sedan. And we can easily say it’s the first one that had us wanting to drive it the moment we laid eyes on it.

Increased refinement was one of their key targets for this go around; as well as an obviously sportier design, which takes cues from their sport sedan knockout Stinger. And it does share many of the Stinger’s highlights; such as its headlight design, and sportback-like profile, with long hood and short rear deck, which goes a long way to mask the front-driver proportions.

Most measurements have increased. Wheelbase does remain the same, but overall length is up by more than three inches. Both width and height have also grown slightly.

The 2.0-liter I4 engine under the hood has not changed as far as output, remaining at 147-horsepower and 132 lb-ft. of torque. But, some updates have been made to improve efficiency.

And what’s attached to it is definitely new. It’s a CVT, but not just any CVT. This one is Kia’s own design they’ve dubbed IVT, or intelligent variable transmission. 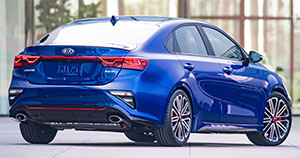 The hardware is all typical CVT, but the software attempts to mimic a true automatic; with simulated gears providing pre-programmed upshifts under full throttle, and clear downshifts when you call for more power.

You can also get a 6-speed manual, but only in base FE trim.

As Donald Rumsfeld masterfully iterated, sometimes you don’t know what you don’t know. What we didn’t know, is that with the same power as before, and the same wheelbase; could the new Forte really perform all that differently at our test track.

Well for starters, the structure has been stiffened significantly over last year, with more high-strength steel; and there’s a whole new suspension bolted to it.

Now, you could say that handling has never been the Forte’s forte, but we digress. What we will say, is that the revised geometry of the McPherson strut front and torsion beam rear suspension, has certainly made the Forte more responsive.

We’re not talking about a sport sedan here, and there’s certainly still room for improvement; but driven at the sedate pace we expect most Forte drivers to employ, it turns in adequately quick and feels relatively solid.

Things are more of a letdown in the acceleration department. There’s just no sense of urgency from this 2.0-liter. It was a lengthy 8.1–second trip to 60 for us, though that is over half a second quicker than our last Forte sedan tested in 2014. 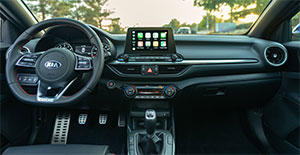 Under full acceleration, the new CVT certainly behaves like a traditional automatic; ramping up to redline and then falling back down to around 2,500 RPM or so. Lather, rinse, repeat. True, it doesn’t feel or sound like a CVT, but now it just feels like a really lazy automatic. The ¼-mile ended in 16.4–seconds at 87 miles-per-hour.

Not thrilling, but there are rumors of at least one sportier version of the Forte on the near horizon.

The interior layout is very familiar to what we’ve seen from Kia and even Hyundai of late. An 8-inch touchscreen is standard on all Forte’s as is automatic climate control; part of a simple and uncluttered interior that is supposedly aeronautically inspired.

Accommodations are spacious with interior volume that is very generous for its class. So, its nicely comfortable for the driver, their co-pilot, as well as those in the rear. The trunk is well finished for the compact class, and boasts a whopping 15.3 cubic-ft. of space.

Due to the CVT and engine updates, Government Fuel Economy has improved; now sitting at 30-City, 40-Highway, and 34-Combined. We averaged a quite impressive 37.0 miles-per-gallon on Regular.

While the Honda Civic and Toyota Corolla will likely always be the giants in the segment, the 2019 Kia Forte has become more appealing than ever; both visually, and with a more refined driving experience.  In case you haven’t heard, compact sedans are the new midsize family cars, and the new Forte is clearly in the game.