The days of bemoaning the fact that sporty car builders now sell more SUVs than cars are coming to an end. It’s time to face the reality of where we are today. SUVs are win-wins. People can’t get enough of them, and they are highly profitable to build. So it’s no shocker that even Lamborghini now has an SUV…the Urus.

Studious viewers will of course point out that this 2019 Lamborghini Urus is not the first utility vehicle from the brand; that would be the LM002, which we tested way back in 1988.

Well, that rugged, military-spec 4X4 was nothing at all like the Urus, having more in common with a tractor than a high performance machine. The Urus on the other hand, manages to look, feel, and yes, drive much like what one expects from a modern Lamborghini supercar.

Lamborghini was kind enough to drop off a blindingly yellow Urus test vehicle while we were at our winter proving grounds of Roebling Road Raceway near Savannah, Georgia. 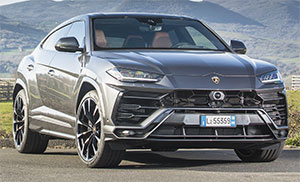 And while there is a clear priority on high-performance, the interior space is very livable as well; with great comfort, and legit room for 4 adults.

And now here’s the part where we tell you, that being part of the Volkswagen group, the Urus is based on the Audi Q7. Technically that is correct, but needless to say, you won’t be doing a lot of parts swapping between the two; as Lambo started with just the basic architecture, and bolted their own stuff onto it include styling that is far faster than other SUV in the VW corporate stable.

Likewise, they took just the 4.0-liter V8 twin-turbo engine’s block, and built their own version that whips up 641-horsepower and 627 lb-ft. of torque.

Then of course, Lamborghini engineers had their way with the ZF 8-speed automatic transmission and all-wheel-drive system, which includes torque vectoring, as well as four-wheel steering.

Bottom line, it’s a 4,800-lb. sport utility that can streak to 60 in 3.6-seconds, with a factory claimed, world’s best 190 mile per hour top end, and out-handle and out-brake numerous exotic sports cars, and even get you through some light off-roading situations as well; thanks to all-wheel-drive traction and drive modes that can pump up the ride height as far as 9.8-inches. 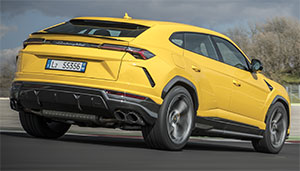 But nothing about the experience makes you want to direct the Urus to the Rubicon; rather, we took its talents to Roebling’s nine high speed turns.

Urus gets deceptively fast very quickly; almost making you forget you’re in an SUV. But, it can’t quite overcome the fact that your posterior is quite aways off of the pavement.

Braking is by way of 10-piston calipers, clamping down on standard ceramic discs; performance was borderline epic.

It certainly doesn’t look like that original Rambo Lambo, nor does it really even look like an SUV in the true sense. More of a sleek hatchback that sits way off the ground, has all-wheel-drive, and rides on 21-inch wheels; or these matte finish 22s if you prefer. 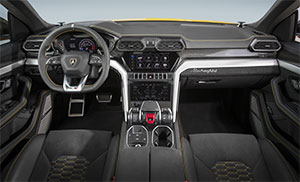 Honestly, few exotic car owners ever drive their car on a race track, or even sniff its performance potential; thus, the Urus actually makes way more sense as a daily driver, and it can still handle itself quite well, if you do get talked into a track day.

Things inside are all Lamborghini, with no trace of Audi anything. You’ll find plenty of the traditional hexagon and Y-shapes, as well as the same TFT gauge panel used in the Huracan.

The center console features an identical start button with flip up cover, as well; but the drive mode and chassis selectors that bookend it, are more extensive. Above, are two touch screens; one for infotainment, and one for cabin comfort.

For hauling stuff, there’s 21.8 cubic-ft. of cargo space in back, and you can always lower the air suspension to make loading easier.

There’s no doubt that there are lots of Lamborghini fans that loath the idea of this 2019 Urus. But, trust us, once you drive it, there is absolutely nothing to hate about it. It’s a fantastic, modern performance car in an SUVish body. And here’s where we’d love to end this test with a bad pun about Lamborghini following the SUV herd with the Urus; but actually, they’re now in the lead.