The first Lexus ES…the ES stands for “elegant sedan” …arrived in 1989 as the entry level sedan in Toyota’s still flegling luxury brand. It quickly became a strong seller, offering buyers an affordable was to enjoy outstanding luxury and reliability. But, through six generations, the ES was seldom called “fun to drive”. Lexus claims that changes with the 7th gen ES. Let’s see if we agree.

The original Lexus ES played just as big, if not due to higher volume, bigger role in making Toyota’s fledgling premium brand so popular so quickly. In fact, the ES was their top seller until the RX crossover came along a decade later.

Now starting its 7th generation, even with crossovers dominating the luxury market, this 2019 Lexus ES remains an important model. And, this year also sees their F Sport label applied to the ES for the first time. That made our decision on which ES to test, an easy one.

The F Sport distinction starts by adding a mesh-pattern to the big-mouth grille, part of a unique front fascia that also includes larger air channels. There’s also a spoiler tacked onto the trunk lid, tinted lenses for the tail lights, and graphite 19-inch wheels. 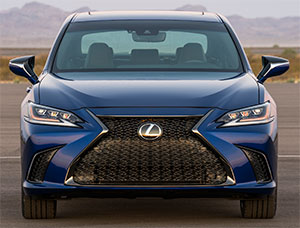 Now, all ES’s benefit from a 2-inch wheelbase stretch, wider track, sharper lines, and slim headlights with signature L-shapes. More aggressive than before? Most certainly, but still plenty classy.

As to the more important stuff, the F Sport comes with Dynamic Control Shocks and adjustable dampers; but getting the sportiest F Sport experience, requires adding the reasonably-priced Adaptive Variable Suspension.

With it, ride quality naturally, is Lexus magic-carpet-like smooth. It’s only when you engage Sport S or Sport S+ modes that the newfound athleticism becomes apparent. Not only does the suspension tighten up, but throttle reaction, transmission shifting, and steering response are all heightened.

We’ve seen all of this before with Lexus of course, with varying levels of success. While there’s only so far you can go with a still-heavy front-wheel-drive car when relying almost exclusively on electronics, the pendulum does clearly swing the farthest to the dynamic side for an ES ever.

Indeed, our staff’s track impressions have never been so effusive for a Lexus ES… “car is impressively flat with aggressive turn-in… sweet weighting to the steering and executing fast inputs is a pleasure… grip is solid and balance feels nice…” 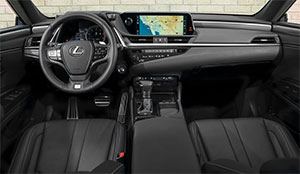 There’s more power too, though it’s not an F Sport exclusive, as all ES’s get an upgraded naturally-aspirated 3.5-liter V6. Horsepower is up 34 to 302, and 267 lb-ft. of torque means an additional 19 lb-ft. They did this while also increasing fuel economy. And, on that,  there’s still an ES hybrid available as well.

We were more interested in living the increased performance; and while an additional 34-horepower may not seem like a huge deal, with the augmented throttle response it feels like a lot more. And it was actually kind of a handful getting off the line cleanly, without a ton of wheel spin.

But those are the kind of challenges we enjoy around here, and eventually we found the sweet spot; getting to 60 in a respectable 6.5-seconds.

An 8-speed automatic transmission is the next step on the power flow chart; and while gear changes are still “smooth as a Lexus”, they don’t interrupt the power party in any way; taking us to the end of the ¼-mile in 14.9-seconds at 98 miles-per-hour. 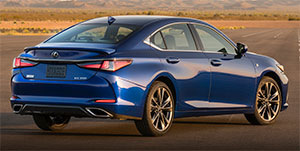 Here, inside the F Sport, Lexus has done more than ever before to energize things up as well; seats feel racy and supportive, and there’s a nice, thick F Sport steering wheel. None of this at the sacrificing of comfort, of course, both front…and in the still spacious 3-person rear bench as well.

Lots of tech on display, from the active digital gauge panel to the available 12-inch multimedia screen that sits up high on the dash, making it very easy to monitor. Though the fussy Remote Touch Interface persists.

All ES’s are very well-equipped, evidenced by a narrow pricing bandwidth; base models starting at $40,775. This top of the line F Sport begins at $45,310, with Luxury and Ultra Luxury trims between.

While the 2019 Lexus ES F Sport still wouldn’t fit most people’s definition of a sport sedan; the strides they’ve taken to make it a much better performer are much appreciated. And, what is of even more importance, is that they’ve done it without subtracting anything from what the ES has always been; a no compromise luxury experience that is highly attainable. And now, it’s just a lot more enjoyable to drive, too.