After years of surviving with just race cars, and hype from the legendary F1, McLaren got serious about being a full-line exotic carmaker. And since then, it seems they’ve dropped off a new one in our inbox every year. This time our good fortune is this 720S track pack. So let’s seek out some apexes to unpack the details.

We’ve been through just about the whole suite of recent McLaren Sports Series entries, but it’s been quite some time since we’ve been behind the wheel of one of their mid-level Super Series models.

The perfect place to remedy that is our 2-mile winter testing wonderland that is Roebling Road Raceway near Savannah, Georgia; and we’ll be doing it in this fabulous 2019 McLaren 720S Coupe.

We promised McLaren that we’d take it easy with their British borne baby, and we did. Realizing what a rare opportunity we had before us, it was really hard not to take full advantage of it. 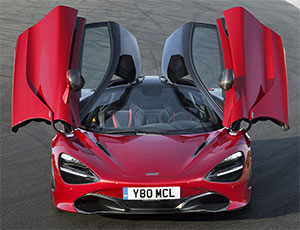 Like most supercars, it’s all in the details; as low, wide, and aerodynamic are common themes of the breed, and proportions all tend to be about the same.

But, McLaren has taken great strides to channel air through the body, rather than just keep adding things on to manage it. The results are poster- worthy material for sure.

All super cars must have a super engine, of course; here, it’s a twin-turbo 4.0-liter V8 that puts out 710-horsepower and whips up 568 lb-ft. of torque, working through a 7-speed DCT. That amount of power is downright sinful, so appropriately enough, the engine lies in its own mid-ship red light district.

Managing that amount of horsepower, in a strictly rear-wheel-drive car with immediate throttle response, can sometimes be a cautionary tale; but if there’s any wide open track in front of you, the 720S will eat up all of it in short order, all while shrieking like a banshee.

Sport mode offers more than enough performance potential, but Track mode is there if you feel fully up to managing everything for yourself. And its worth checking it out, just to see the interior transform from daily driver mode into ultra-high performance machine. 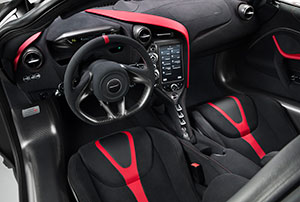 Few cars we’ve ever driven have the ability to accelerate with this kind of ferocity. Power comes on in such a rush, that it can quickly take you by surprise, even when you know it’s coming. In the hands of a skilled driver this car is a virtual weapon.

Proactive Chassis Control II will deliver as much or as little aid as you wish; and there’s even a Variable Drift Control system that helps you get some sidewise fun tuned in too.

Brakes are as amazing as all of the other performance aspects of the car, never breaking a sweat, or causing us to either, no matter what the speed.

So other than a very forward seating position that takes a little getting used to, the 720S is not intimidating at all; just a very fun car that happens to have mind-blowing performance.

So, you certainly could drive it every day, and the interior is much more inviting that the 650S; but it can still be a harsh environment at times. On anything less that perfectly smooth roads, you really need to be in Comfort mode.

Doors open up and forward, taking half of the roof with them, to allow for easy access.

McLaren considers this their most sophisticated and luxurious cabin to date. We found it quite spacious, and visibility has been improved all around. There’s more available space inside for storage than before, as well as a surprisingly accommodating front trunk.

Pricing starts at $297,100. Sure, you could buy something Italian for that, and get mostly the same experience that you’ll get here, but people that buy McLarens, are generally looking for something different.

The 720S is without a doubt, the most unified, total package from McLaren yet. That includes being totally easy and fun to drive. It’s all even more amazing when you factor in that McLaren has really only been focusing on road cars for about 10-years now.

Granted, the 720S is not a good choice for an always practical mega-buck car buyer. But, in the world of true supercars, it really stands out, and it’s worth every pence.