We don’t know how many classic Mercedes-Benz Gelandewagens have been built for military use over the decades, but we do know that over 300,000 of them have hit civilian streets, with a small percentage in the U.S. such rarity plus macho masculinity has made it a highly desirable ride indeed. Will an all-new, and possibly more gentrified, G-class change that? Or, is a modern “G” all the better.

While it has gone by many different names over the years, and been offered in sometimes diverse forms; the G Wagon has soldiered on with the same basic architecture since it was originally conceived in the 1970s. That makes this 2019 Mercedes-Benz G-Class the first truly all-new edition.

From a distance, it doesn’t really look that “new”. Up close you will notice the still round headlights are now LEDs. Otherwise, still a full frame underneath…with all suspension bits bolted directly to it.

But under its boxy body, there’s a new double wishbone front suspension. Better road manners were the priority, of course, but they actually increased ground clearance too.

A solid axle remains in place at the rear. But, four trailing arms on each side, as well as a new Panhard rod, smooth things out on the pavement. 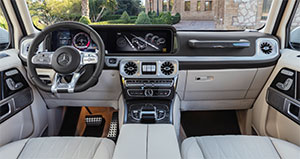 We found the most noticeable changes are inside, including a full digital cockpit with twin 12.3-inch displays. There are lots of other big electronic updates for the sake connectivity, convenience, and safety. That includes a new electro-mechanical steering system that allows for Parking Assist, as well as super-aggressive lane keep assist.

This G is over 2-inches longer than before; but more relevant, is that it’s almost 5-inches wider, which means you no longer feel like you’re in a tank.

Most of the base powertrain elements are carryover; primarily the 416-horsepower 4.0-liter twin-turbo V8 engine, though it gets a new 9-speed automatic transmission.

Our AMG G63 version upgrades to a hand-assembled monster version of that same 4.0-liter, replacing the previous 5.5-liter twin-turbo V8. Output climbs to 577-horsepower and 627 lb-ft. of torque. 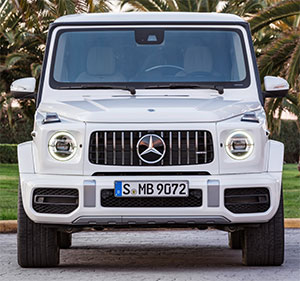 As you might expect, she’s is a thirsty one however. Government Fuel Economy Ratings are 13-City, 15-Highway, and 14-Combined; and our average on Premium fuel was indeed 14.1 miles-per-gallon.

The big upgrade in software allows for DYNAMIC SELECT drive modes, with up to five to choose from; and despite a much friendlier nature on the street, they were actually able to increase off-road capability as well.

You can lock both axles, as well as the center differential of course; and knowing you can go over or through just about every terrain or obstacle you can imagine, perhaps even survive the ever-imminent zombie apocalypse, is reason enough for some to go G-class.

But before doing any of that, you may want to swap out the summer tires on our tester’s 22-inch forged AMG wheels.

It still understeers like construction equipment, but otherwise it has a much better on road presence. A tad quieter as well, but they could have gone farther in this area; though I guess there’s only so much you can do to prevent wind noise when you’re forcing this much square through the air. 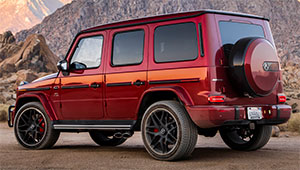 It’s fairly easy to drive, and quite maneuverable, though slow and steady is the better name of this game. And not to worry, stability systems will kick in early and often to keep you safe.

Our star engine enables the G63 to leave anything short of high performance cars in the dust with a 0-60 of just 3.9-seconds. Even when you know going in that it’s going to be fast, this 4.0-liter still impresses with the way it’s able to get 5,700-lbs. plus, up to speed and in a hurry.

Power never tapers off, and even sounds like a much bigger V8, as you streak down the track; clearing the ¼-mile in 12.5-seconds at 109 miles-per-hour.

The two things that the G-Class does best are; climbing over every obstacle in its path, and drawing a crowd wherever it goes. Now you can guess which of those has made it the status symbol that it is today. The comment we heard most from people seemed to be “If I had the money, I’d own one for sure.” Still mostly hand built, still the ultimate ego-machine, this 2019 Mercedes-AMG G63 has no rival.