Entry-level luxury is a difficult undertaking for established luxury brands like Mercedes-Benz. It needs to be attainable enough to attract new and less well-off buyers, but still able to deliver the Mercedes-Benz experience that attracted aspiring owners in the first place. Now Mercedes has had varying levels of success in this area, but most agree they pulled it off splendidly with the CLA. Now, can they go a notch lower?

While this 2019 Mercedes-Benz A220 sedan is all-new to us here in the U.S., the previous three generations of the subcompact A-class have been sold in other parts of the world, mostly in hatchback form. In addition, here in the states, that chassis also underpins the current GLA-class crossover, and even the QX30 over at Infiniti.

Now, with the launch of this 4th generation of A-class, it will be available for the first time anywhere as a 4-door sedan. Odd, since all we hear about these days is the death of the traditional 4-door. And, don’t confuse this A220 with the CLA, that’s been on sale here since 2014. It was, up until now, Benz USA’s entry-level model, but was and is more of the 4-door coupe style. Yea we know, sometimes things get confusing around the automotive world. 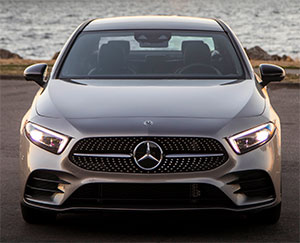 No misunderstanding engine choices, as there are none. A relatively-mild 188-horsepower 2.0-liter turbo-4 with 221 lb-ft. of torque and a 7-speed DCT automatic is all that’s available. But you do get to decide whether you want to add all-wheel-drive, or stick with front-wheel-drive.

Our all-wheel-drive tester hesitated a little off the line, but decent amounts of power arrived soon enough; as did 60 miles-per-hour, in 6.5-seconds.

Shifts were quick, but not overly urgent; and enabled the engine to maintain the bulk of its adequate output the whole way through the ¼-mile, which we finished in 15.0-seconds flat at 92 miles-per-hour.

A fair amount of engine noise finds its way into the cabin, but it’s more of an aggressive sporty tone, rather than traditional entry-level-car buzziness.

Our A220 4MATIC worked its way through the cones without much drama. There’s a little understeer here, and a little oversteer there; but they seem to balance themselves out pretty well. Some might feel it’s a little sluggish to respond to inputs, but we’d put it more in the solid category, which is pretty impressive for a subcompact ride. Especially since the suspension is soft, but body roll is held in check.

Though quite capable, it’s less of a sport sedan than some might want, and more of a nicely competent daily driver; no doubt an AMG version will take this further at some point. 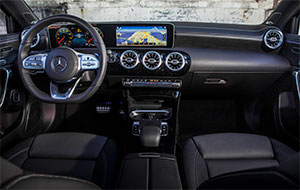 Away from the track, it delivers a very refined ride for such a small car; we’d even say it’s “a class” above the CLA for sure.

Often, the interior is what makes or breaks an entry-level luxury car; and for the most part, things inside the A220 look and feel like bigger Benz’s. No obvious bargain basement compromises. Typical for a German car these days, there are lots of options to choose from, with plenty of Mercedes-Benz’s latest technology to pack in here.

That means a standard 7-inch full-digital cluster for the gauges, and another 7-inch screen to the right for infotainment; but you can upgrade them both to the 10-inch displays seen here.

If you’re a home digital assistant addict and must speak everything into action, just say “Hey, Mercedes” and then the car awaits your instructions. If you’re more of the silent type, there are still enough actual controls to perform basic duties. 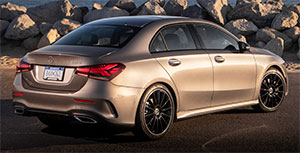 With not very much sheet-metal to work with, it was hard to fully translate the Mercedes language into such a small package; but this particular dialect, though less distinctive, is pleasing enough to the eyes. Standards include full LED exterior lighting and a panoramic sunroof.

4MATIC Government Fuel Economy Ratings are 24-City, 34-Highway, and 28-Combined; we averaged 26.3 miles-per-gallon on Premium. That rates a better than average Energy Impact Score of 11.8-barrels of annual oil consumption with 5.4-tons of CO2 emissions.

When it comes to pricing, you have to choose between front or all-wheel-drive; $33,495 standard, 4MATIC 2-grand more, at $35,495. Though all of these enticing available options can push things close to 50-grand.

Mercedes-Benz is making more of their global portfolio available to us here in the U.S. than ever. That’s less for us to complain about, and more cars to enjoy. But, the real plan is getting more people to enjoy them. The 2019 Mercedes-Benz A220 offers a great mix of posh and performance in a classy-looking sedan body. Pay attention entry-level luxury providers, A-Class is now in session.