Yes, the Nissan Leaf was the first; but as is often the case, those that followed, built on what Nissan started, and improved upon it, to the point that the Leaf’s 150-mile range was no longer competitive. Enter the 2019 Nissan Leaf Plus.

There’s more capacity in the battery, jumping from 40-kWh to 62, for a 40-50% increase in range. And they accomplished this by making it denser, not physically bigger, so they were able to keep packaging mostly the same as before.

And it’s not all about range, either.  Nissan dedicated some of that capacity to delivering more go power as well, the Plus motor is up 50-kW to 160, compared to the base Leaf.  That equates to 214-horsepower and 250 lb-ft. of torque, and top speed goes from 89 to 98 miles-per-hour. 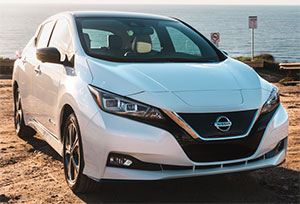 And while we think increasing range was more important than adding power, it’s hard to argue with their thought process when you nail the throttle and take off from a stop light, or easily merge into highway traffic without breaking a sweat.

In regards to that range, the Leaf Plus is rated at 226 miles, unless you get SL or SV trim in which case you only get 215. But that was still more than enough for us to get to our test track, hammer it around for most of a day, and make it back to the office.

We found it a little conservative off the line. It’s certainly not the smoking tire experience of some performance-oriented EVs; delivering max power gradually as you get rolling. Super consistent though, with run after run of 7.1-second 0-60s and 15.7-second ¼-miles at 90 miles-per-hour; feeling solid and stable the whole way.

It was fun and responsive through the cones, too. The Leaf has a very light and tossable feel to it; with torque on demand, and light steering that allows you to push pretty hard through here without upsetting anything, or even triggering stability control.

Some gentle body roll is present, and the denser battery pack makes the Plus almost 300-lbs. heavier; but with all of the weight so low in the chassis, you hardly notice it. 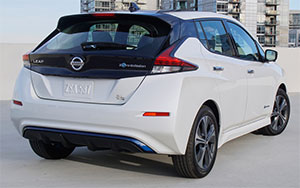 In our braking test, 120-feet was our good average stopping distance from 60; there was some fade after a few runs; but stability was fine throughout.

The Leaf is in just the second year of its 2nd generation, so no other big changes for the Plus, as it’s technically an addition to the lineup, not a replacement of the previous Leaf.

So, the same sharper 5-door shape that debuted last year remains; but all software gets updated, including programming for the throttle pedal, which now has a more natural feel.

But there are some understated signs to betray the Plus status, a tweaked front fascia with blue highlights, and some unique logos.

And inside, you get even more extras with the Plus, most noticeably a larger 8-inch touchscreen with improved smartphone integration, to fulfill your navigation and connectivity needs.

Cargo space in unchanged, 23.6 cubic-ft. in the rear, expanding to 30.0 cubic-ft. with the rear seatbacks folded. 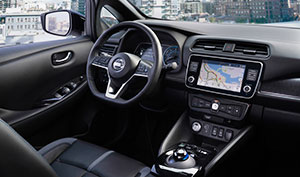 More battery capacity, means longer charge times. But, to fully charge with 240-home charging still only takes about 11½-hours. And, the Leaf Plus can accept 100kW DC quick charges, which can bring it to 80% in just 45-minutes.

Government Fuel Economy MPGe Ratings for our SL trimmed test car are 114-City, 94-Highway, and 104-Combined. That makes for a near perfect Energy Impact Score, just 0.2-barrels of oil consumed yearly with no CO2 emissions.

A base Leaf stickers for $30,880, and is still one of the best EV bargains out there. The Leaf Plus is available in the same S, SV, and SL trim levels, starting at $37,445; and for now, all of the usual Government tax incentives are still in place.

A much needed addition to the lineup, the 2019 Nissan Leaf Plus not only keeps the Leaf competitive with newer EVs, but gives buyers an additional choice. Whether you’re looking for commuting frugality, or the ability to explore a little more, and go farther on a charge; the Leaf, just as it always has, truly delivers on the EV dream.