Sales of SUVs show no signs of slowing down any time soon. And sales of the Porsche Cayenne in particular, seem immune to the economy, fuel prices, or any other socio-economic barrier you can think of. And it goes without saying the all-new 3rd generation Cayenne will be faster than ever. But, will it also be better?

There are performance oriented SUVs, and then there’s this 2019 Porsche Cayenne Turbo; something more akin to a supercar wolf in crossover clothing.

That attire hasn’t changed all that much since the Cayenne first began roaming America’s byways 16-years ago. This latest 911 flavored ute still looks wide and purposeful; body panels draped tightly over the same 114-inch wheelbase as before.

Overall length is up slightly, but where the Cayenne attempts to differentiate itself is with its lighting; distinctive LEDs everywhere, including the full width of the rear hatch.

Turbos get an exclusive double-row set of light modules for headlights; along with even wider fenders, 21-inch wheels, an adaptive roof spoiler, and unique exhaust outlets. 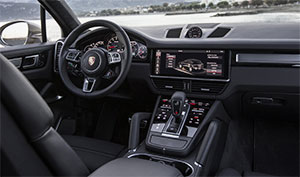 While inside, it is 2-row comfortable with first rate materials; the overall ambience is very technical and sporty. You’ll find the same basic, Panamera-inspired, rising center console theme as before, but just about everything has been updated.

No more button overload, but we can’t say we like the touch-panels that replaces them more. Yea, we know, some people are never satisfied. Still, there’s no denying everything is logical, and all important controls fall readily to hand.

That includes the eShifter that controls an updated 8-speed Tiptronic automatic, which is of course connected to the real star of this show…a fire-breathing 4.0-liter twin-turbo dragon of a V8 that exhales 550-horsepower and 567 lb-ft. of torque.

It dumps a heavy dose of sport into this utility as you’d expect; making it a sheer joy to hustle through any engaging roads you come across. You don’t even need an exotic destination, as it makes every trip an adventure.

And you get much more than just a bigger engine with the Turbo, Porsche’s Surface Coated Brakes greatly reduce the amount of brake dust dirtying up your wheels. 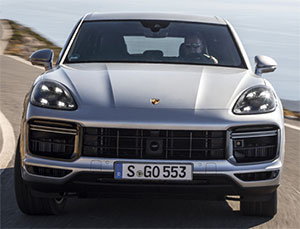 It’s incredibly quiet inside, and at no time does it feel truck-like; though we did experience some hiccups from the transmission in slow speed situations.

As for cargo hauling, there’s a good 26.3 cubic-ft. of space in back; expanding to 59.3 with the rear seatbacks folded.

All Cayennes are all-wheel-drive, and trips down the drag strip are more similar to a roller coaster ride than any type of sport utility conveyance. Much like the 911, Porsche’s launch control works extremely well, taking care of all of the math. All you have to do is point and pray before releasing the brake, and brace for the accompanying outpour of power that is the immediate result of that action.

You’ll be at 60 before you know it, or 3.6-seconds when you’re keeping track. Power is mythical in delivery, with Herculean amounts of it, no matter where the tach needle is pointing. And just to further mix our mythological metaphors, the exhaust note is a thing of Venus-like beauty for the ears.

Shifts are closer to PDK than the Tiptronics of old, helping shuttle us to the end of the ¼-mile in 12.0-seconds flat, at 115 miles-per-hour.

There’s a shocking amount of grip for a 4,800-lbs. SUV that can tow 7,700–lbs. Turn-ins are brutally aggressive, and oversteer is always just an inappropriate stab of the throttle away. All systems, including optional rear axle steering, work together in perfect harmony to create a sports car like experience that just doesn’t seem possible.

All while the 3-chamber air suspension keeps it virtually flat through the cones. It doesn’t feel exactly like a 911, but you can sure tell they’re related.

Brakes are simply enormous, as well as highly effective. Stops from 60 averaged an incredibly short 84-feet, with laser-like stability and no trace of fade.

Pricing for this top-of-the-line Cayenne Turbo is a lofty $125,650; if you can make do with a bit less performance, though not much, a base Cayenne starts at just $66,750, with E-Hybrid and S trims in between.

The first gen Cayenne was proof that Porsche can do something other than sports cars, and do it quite well. Now with multiple SUVs and even sedans in the Porsche lineup, the 2019 Cayenne Turbo seems to have embraced its role of just being far more capable than any other performance-oriented SUV out there, while still wrapped in all of the luxury our bodies can handle.