Things have seldom been easy for the Ram. You know, Detroit’s other truck brand that’s not Ford or Chevy. But things have certainly been looking up lately; as Ram’s full-size pickup sales have been steadily increasing, even outselling the Chevrolet Silverado a few months along the way. So, let’s see if an all-new 1500 is “Ram Tough” enough to muscle its way permanently up the ranks.

It was the 3rd gen Dodge Ram that really got the ball rolling for the brand when it arrived for 2002. Ushering in firsts like Mega Cab and the return of Hemi power. 2009 saw a 4th gen. debut with all-coil spring suspension and side-saddle Ram Box storage. Now, 2019 sees the most all-new Ram 1500 in decades, one that FCA hopes will usher in a whole new era of power, comfort, and utility for today’s truck buyers.

Much like Ford, the 1500 went on a weight loss plan, though not as drastic, shaving only about 225-lbs; mostly due to more high-strength steel in the frame, with aluminum for the tailgate and some suspension parts. 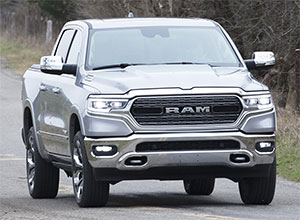 The exterior look is smoother, yet still has a hint of the big rig look of the 90’s. No more crosshairs, just lots of big Ram letters and a new seemingly Transformers-inspired Ram head logo.

We much prefer the Rebel’s, blacked-out malice. And spent some time doing some nastiness of our own in the Arizona desert. The Rebel’s off-road capabilities take a small step up; its 1-inch of lift now come from hardware, not simply pumping up the air spring suspension as before. You also get a locking rear differential, unique Bilstein shocks, skid plates, and updated electronics. It’s still not on the same flight plan as Ford’s Raptor, but now at least on the radar screen.

The Ram 1500 was already the best riding rig in the full-size pickup ranks due to the only 4-corner air suspension out there; new Frequency Response Damping for this year, takes it up one step further.

Front brake rotors are now 14.9-inches, the biggest in the segment. 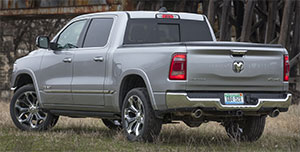 Both get an eTorque mild hybrid system with a 48-volt battery pack that enables auto stop/start, boosts overall efficiency, and even provides a little extra torque. It’s standard with the V6, optional on the HEMI. No word yet if or when a diesel will return.

Government Fuel Economy Ratings for a HEMI 4X4 are 15-City, 21-Highway, and 17-Combined. No official ratings for the 3.6-liter just yet. So the HEMI’s Energy Impact Score is slightly worse than average at 19.4-barrels of yearly oil use, with CO2 emissions of 8.6-tons.

We spent most of our Arizona-based early drive time with the HEMI, and it felt just as powerful as always, though we don’t remember the gas pedal being this sensitive, which seems a little out of place in a big truck. There’s a new 850-watt electric fan to cool it, and it’s very noticeable when it kicks in.

Transmission remains an 8-speed automatic, and everything is still put in motion with a dash-mounted rotary shifter; but operation has gotten much quicker, making 3-point turns less stressful. Otherwise, in normal driving, the transmission behaves fairly well. 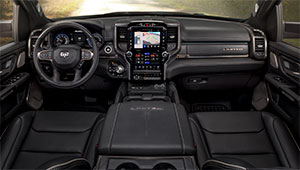 Active noise cancelling seemed to keep road noise to a minimum, though we did hear some wind noise in our pre-production test vehicle.

The upgraded interior of the 1500 is otherwise most impressive. We loved the available 4th generation of FCA’s UConnect touchscreen, now 12-inches in size. It remains logical and responsive as always. Front seats are very comfortable and top-line Limited trim is simply exquisite. Both Crew and Quad cabs are available, with the most interior space in the segment.

Well, just when it looks like things are set to really take off for the 2019 Ram 1500, there’s an inconvenient truth, that an all-new Chevrolet Silverado is arriving at almost the same time. So, FCA had better make some hay while the sun’s shining. It’s still the best cruiser with a bed out there, but it will take a lot more than that to permanently take silver home.