It seems hard to believe that it has taken this long for Subaru to recommit to the 3-row crossover. After all it’s been 5 years since the uninspired Tribeca exited the scene. But then they’ve always done things in their own time. And with sales numbers continuing to climb, there clearly was no urgency.  But, that time is now, so let’s find out if the new accent…can ascend the family-size crossover ranks just as quickly.

To us, the biggest difference between the 2019 Subaru Ascent and the unlamented Tribeca is that this one seems a genuine attempt to compete in the growing 3-row crossover market. The Tribeca always seemed like a bit an odd-looking afterthought.

Truly built for American families this time around, there’s generous room for 7 or 8-passengers; and for those of you keeping score at home, the Ascent packs up to 8-USB ports and 19-cupholders,.

You’d think that this would call for a six cylinder ah-la Tribeca. But, no, the Ascent makes do with a new 2.4-liter turbo-4; yet still claims it will tow 5,000-lbs. Considering that it mates to a CVT, we’re a little skeptical; though its 260-horsepower and 277 lb-ft. of torque feels up to the task. 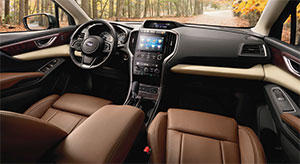 Being a Subaru crossover, means all-wheel-drive is standard, and there’s a decent 8.7-inches of ground clearance to boot.

Despite sporting the same Subaru Global Platform as the compact Impreza, the Ascent’s stretched 113.8-inch wheelbase keeps it plenty stable……yet also quite nimble, as we found out at our test track. Here, it performs much like a bigger Outback.

There is a solid presence, with very little roll; and no top-heaviness. Steering is super-light, but feedback is seriously lacking. Still the Ascent responds quickly to inputs.

After a speedy lurch off the line, it’s slow-and-steady as she goes, having us wishing for a V6; but the CVT performed better than expected down the straight. 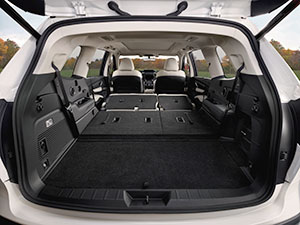 Ascent is the largest Subaru ever; and while the exterior is more midsize, it borders on full-size room inside. Both passenger and cargo volume are greater than segment leaders Honda Pilot and Ford Explorer, falling just short of the Volkswagen Atlas.

Whether you choose the 7 or 8-passenger arrangement, the expansive space is highly configurable. Even the 3rd row is acceptable for adults, though the seat bottoms are very low to the floor.

For the driver, seats are typical for Subaru, a bit hard; but adequately comfortable. It’s a fairly quiet space as well, save for some aggressive engine noise that seeps in when you bury the throttle.

EyeSight Driver Assist Technology is of course standard on all Ascents, which includes Automatic Pre-Collision Braking. But features like Blind Spot Detection and Lane Change Assist require an upgrade. 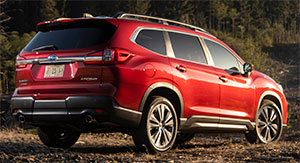 You’ll see a little Outback familiarity in the rear of the Ascent, but the rest of the body is just blend-in generic crossover, as Subaru surely wanted to avoid repeating any Tribeca styling controversies.

Could it use a little more power? Like most Subarus, yes. But the 2.4-liter did perform better than expected, though its hyper throttle response from a standstill takes a little getting used to.

The Ascent starts at $32,970; but for $2,200 more, you can step up to Premium trim with enhanced driver assist features, max towing capacity, nicer trim inside and out, and an 8.0-inch touchscreen for multimedia. Limited trim adds even more, until you top out with Touring trim for $45,670.

Visually the 2019 Subaru Ascent does not stick out from the rest of the 3-row crossover crowd. But, early sales numbers show that suits Subaru buyers just fine. They just wanted a lot more of what they bought a Subaru for, and now they’ve got it wrapped in a still familiar package. We predict the Ascent is going to be yet another milestone hit for Subaru, the little brand that can!