It’s always nice when you can get a little something extra. Well, we love our long-term Subaru Crosstrek just fine, and didn’t really feel it was in need of anything, other than maybe a little more power. Well, Subaru has done just that, given the Crosstrek a little boost, as well as made it more efficient, with the Crosstrek Hybrid.

And this one is much more serious than before, a plug-in hybrid, or PHEV even; the first we’ve driven from the brand.

What’s now labeled as StarDrive, integrates two electric motors into the 2.0-liter boxer-4 CVT all-wheel-drive powertrain. It’s a detuned version of the 2.0-liter, at 137-horsepower and 134 lb-ft. of torque. But, the instant surge of power you get from the electric motors easily makes up the deficiency. Although total output is listed as just 148-horsepower. The standard Crosstrek rates 152. 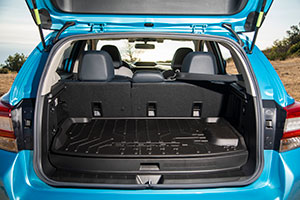 Storing this PHEV energy is an 8.8-kWh battery pack. It allows for up to 17-miles of EV-only driving, at speeds up to 65 miles-per-hour.  And other than the lack of engine noise for those EV miles, and a much different regenerative braking feel, the Crosstrek Hybrid doesn’t behave unlike the non-hybird Crosstrek that’s part of our current long-term fleet.

But, whatever it is you are hauling will get there faster, as Subaru claims the electric boost shaves a full-second off the Crosstrek’s 0-60 time. And indeed we found that to be true, and then some. 8.5-seconds to 60 is still not what we’d call quick, but that’s down from 10 as the Crosstrek Hybrid leaps off the line more eagerly.

From there, the CVT quickly finds its sweet spot as the engine moans its way through the ¼-mile in 16.6-seconds at 82 miles-per-hour.

Despite hauling more EV hardware weight around, the Crosstrek Hybrid felt responsive and quite fun at the track. Understeer seems to arrive a little more quickly than the standard Crosstrek, but we could still carry quite a bit of speed through the cones. 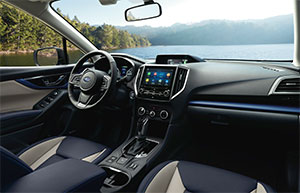 An overall soft feel remains, and quite a bit of body roll due to the 8.7-inches of ground clearance. But steering is light, with a fair amount of feel compared to rivals.

Active safety is a big part of Subaru’s strategy, and EyeSight with Pre-Collision braking is standard. As always, it worked silky smoothly, bringing us to a stop every time. There’s even Reverse Automatic Braking, to aid backing out of parking spaces.

The unique interior has more than just the usual power meter gauge and hybrid displays on its 4.2-inch color LCD display; there’s gray and blue leather on the seats and door panels, as well as blue stitching throughout the cabin, and an upgraded dash-top multifunction display.

It’s distinctive looking outside as well; there’s blue trim, silver metallic finishes, black roof rails and special 18-inch wheels. And if you like this Lagoon Blue Pearl paint job, going hybrid is the only way to get it. 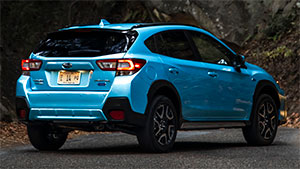 Government Fuel Economy Ratings are 35-Combined, with an MPGe rating of 90-Combined. So, as with all PHEVs, the more your run on battery power, the better you’ll do. But without even plugging it in, we still averaged 34.0 miles-per-gallon; quite good compared to the 29.6 we’re averaging with our long-term non-hybrid Crosstrek.

To make for a better than average Energy Impact Score of 5.5-barrels of yearly oil use, with 2.5-tons of CO2 emissions.

Subaru is marketing the Crosstrek Hybrid as a premium version of the Crosstrek, not just a more efficient one, so it’s priced accordingly at $35,970 to start.

The list of available plug-in hybrid small crossovers is a fairly short one; so this time Subaru is ahead of the game. Now, whether you think the additional cost of the 2019 Subaru Crosstrek Hybrid is worth it or not, depends solely on your personal priorities.

But, it is where the automotive world is headed. So, we applaud Subaru’s first PHEV effort, as it makes the already very appealing CrossTrek even more so.