When it debuted 20-years ago, it was hard to see just where the Subaru Forester would fit in. The brand already had a great reputation for all-wheel-drive wagons that could go just about anywhere. So, how would a small SUV figure into the mix? Turns out, quite well; as the Forester has been the point man in leading Subaru to record sales year after year. So let’s find out if a new 5th generation Forester can keep that going.

For the 2019 Forester, Subaru continues with the strategy they’ve used throughout their lineup for years now. And, it’s not all that unique, actually a tried and true formula of making things just a little bigger and better each time around, as well as taking the opportunity to address concerns and wants of current owners.

Though some things never seem to change, which means all-wheel-drive remains standard, and there’s a 4-cylinder pancake under the hood. That base 2.5-liter has been revised, with a modest horsepower gain of 12, to 182; torque is up just slightly to 176 lb-ft.

As of right now, the optional 2.0-liter turbo is no longer in the lineup. Another thing missing, is a manual transmission; a 6-speed is also no longer available. It’s all CVT now. 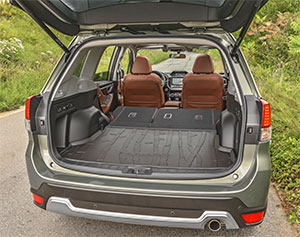 But, we’re not here to talk about what’s not here. The powertrain is supervised by Subaru’s Si-Drive Engine Performance Management software with basic Intelligent and Sport modes for the majority of Foresters; with the new mid-level Sport trim getting an additional Sport Sharp mode.

Now, neither sportiness nor much intelligence is required to drive in a straight line, but we like to do it as fast as possible around here; and it does take some engine power to make that happen. Unfortunately, the Forester’s not working with much here. So, a leisurely 8.6–second trip to 60 shouldn’t come as a big surprise.

The CVT works through a handful of its seven simulated gears, but engine noise remains high as you work your way through the 16.7–second ¼-mile at 85 miles-per-hour.

Rather than the Sport model, we drew the top tier Touring for our test. And, there was a whole lot of rolling when touring through the cones, though standard Active Torque Vectoring, which works with the all-wheel-drive system to send power to where it’s most beneficial, kept grip fairly high. There was also a lightness to the rear that added a bit of playfulness to our exercise. 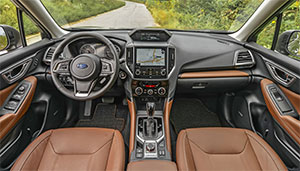 Turn ins are SUV slowish, with a very artificial steering feel. But it all amounts to a steady, safe, stable, and predictable driving experience; what Subaru owners expect, with stability control always at the ready if one steps too far out of line.

Emergency stops from 60 were quite impressive; taking just 110-feet.

EyeSight is now standard on all trims, but there are many more driving aids available; and with them all working, at times you do feel like you’re just along for the ride. And don’t make the mistake of blocking the dash-mounted facial recognition camera with your arm, or the car will tell you to keep your eyes on the road.

So, try not to look around the refined interior while moving too much either. Although you will want to; especially if you go all in for our pretty spiffy Touring trim.

Back seat room is up slightly due to a wheelbase stretch; and cargo capacity also gets an uptick, to 35.4 cubic-ft., 76.1 with seatbacks folded. 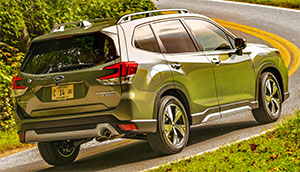 It may be a new platform underneath, but the look is basically the same outside. Most of the Forester’s lines are very familiar, they’re just a little sharper now. Body cladding runs up the sides a little farther, chrome trim is more liberally applied, and of course headlights have been modernized; LEDs standard on all.

Likewise, in back, the taillights are reshaped, the spoiler extends farther down the lift-gate, and there’s a more rugged take for the bumper.

Government Fuel Economy Ratings are 26-City, 33-Highway, and 29-Combined. We did it one better, with a nice round average of 30.0 miles-per-gallon of Regular. There’s a slightly better than average Energy Impact Score of 11.4-barrels of yearly oil use, with CO2 emissions of 5.1-tons.

So, there’s nothing ground breaking or earth shattering about the 2019 Subaru Forester. It’s just one of the best compact utilities around, now made even better. And, to the myriad of Forester faithful out there, that’s music to their ears.