The original Toyota RAV4 was introduced here in 1996, and went on to play a major roll in launching the crossover craze that continues to accelerate in 2019. Now, the 5th gen of Toyota’s compact ute has arrived. And the all-new RAV’s reviews are already raves, including our pick as a best small utility of the year. So, let’s dive into the details of why.

Hard to believe the Toyota RAV4 has been on the road for well over 20-years now. During that time, the economy has been way up, and of course way down; and that was well before everyone had a smartphone in their hands.

Well, the first thing you’ll notice is that Toyota dialed up a seriously rugged new design for this generation of RAV, more than we’ve ever seen, including plenty of 4Runner cues. Hiking boots and cargo pants aren’t required to drive it, but they certainly wouldn’t be out of place; even if your adventures are limited to car pool lanes and suburban cull-de-sacs. 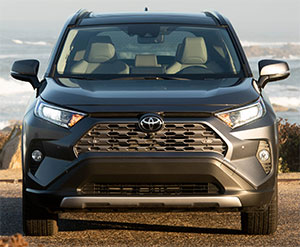 The front end is bigger and bolder, with a grille patterned after Toyota pickups; while the sides sport chunky fenders and clearly defined shoulders. Wheelbase is up about an inch.

The rear view is manly as well, featuring a big bumper with lots of simulated skid plate cladding.

The macho makeover doesn’t transfer over to the driving experience, however. We headed to California for our first drive opportunity. And while the seating position is high, with a generous amount of hood to look over, giving it a big truck feel; steering is very light, and handling is as predictable as a Camry.

There is plenty of engine noise under spirited acceleration; but once up to highway speed, things quiet down very nicely. While the standard 8-speed automatic transmission seems to quickly and easily find the right gear more often than not.

That noise emanates from the Camry’s 2.5-liter I4 engine; and output here is the same 203- horsepower and 184 lb-ft. of torque. 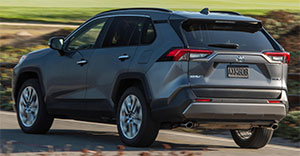 A Hybrid version will also be available later in the model year.

Obviously, sharing the Camry’s TNGA-K platform, means the Rav remains front-wheel-drive based, with all-wheel-drive for an additional $1,400, regardless of trim.

Save for the returing Adventure model, which now comes with AWD standard. That system is a new Dynamic Torque Vectoring one, with Rear Driveline Disconnect, and it’s shared with Limited trim.

All other trims get a more basic system, though it does include Multi-Terrain Select. Ground clearance is as high as 8.6-inches, half an inch more than before. 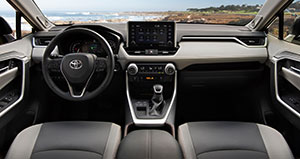 The interior design is clean, burly, and truck-like too, with a dash that is more horizontal than before, as well as physically lower to improve visibility.

The center stack houses plenty of large controls, while above sits a standard 7.0-inch touchscreen. Entune 3.0 Audio Plus adds another inch to the screen. It may not be our favorite multimedia system, but it’s fairly easy to learn the basics.

Rear seat passengers will get a better experience than before, with easier access and comfier seats; as well as more space due to the wheelbase stretch and reshaped door panels.

The cargo floor is longer, but either it sits higher up or the roof slants more dramatically, as the space is actually down a little from last year from 38.4 cubic-ft. to 37.6; though Toyota claims the available space is more usable than before. Max capacity is down from 73.4 to 69.8 cubic-ft.

Base pricing is up just a tad over last year, at $26,595 for LE grade; top trim Limited stickers for $34,595. A reshuffling of trims will also see a sporty XSE HV Hybrid added into the mix as well.

Making a compact crossover choice is about the hardest of any segment, with literally dozens of great options. But, for over 20-years, the Toyota RAV4 has remained a leader of the pack; with this 2019 version, which includes not only a more rugged design, but more capability than ever, it’s a safe bet that won’t change any time soon.