Slumping car sales is no longer breaking news. But, there’s still plenty of room for 4 and 5 door cars, especially if they’re unique and stylish. Take the Volkswagen CC. sales weren’t huge for this coupish sedan, but most would agree it was a terrific flagship for the brand. Well, VW has now launched a new flag waver, with a new name, and more. the Arteon!

Like it or not, 4-door coupe has become a reality in the automotive lexicon, and the Volkswagen CC played a major role in that. Well, now that it has evolved into this 2019 Volkswagen Arteon; VW seems to have moved on to another controversial body-style, at least in America, the 5-door hatchback.

Trunk or hatch, this is the flagship of Volkswagen cars, now that the Phaeton is gone.

Bigger than to the CC, it certainly looks better as well, with a more tasteful overall shape. It still boasts a sporty coupe-like greenhouse, but the face is much more expressive than before. The large clamshell-style hood leads to a severely raked windshield, which in turn, blends into the sloping roofline. 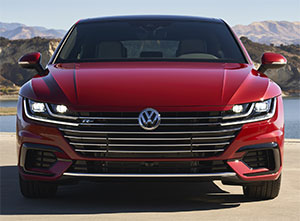 Standard wheels are 18s, with up to 20s available.

But that more athletic shape promises performance that just isn’t there, at least for now. Behind the wheel it feels more a Grand Tourer than true sport sedan, but of course that’s better than just family car.

All Arteon’s feature Volkswagen’s familiar 2.0-liter I4 turbo, now with ratings of 268-horsepower and 258 lb-ft. of torque.

Power is smooth and adequate, almost like a 6, with responsiveness and quietness appropriate for a GT flagship. Front-wheel-drive is standard, 4Motion all-wheel-drive optional; both working with an 8-speed automatic transmission.

That GT feeling was confirmed at our test track. Where it was a little lethargic off the line, but still capable of a low 6-second 0-60 when conditions are right.

Being built on VW’s MQB architecture, gave us high hopes for handling prowess, but our 4Motion-equipped test car felt quite heavy through our cone course. There was also lots of body roll, and we battled understeer the whole time. So very safe, but no backroad slicer.

So, on those two-lane blacktops we slowed down and simply enjoyed this car. It’s a great experience overall, exactly what GT-style driving should be. 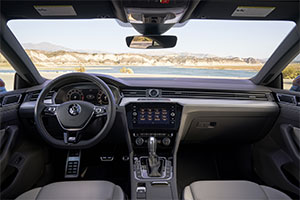 No matter the speeds, you will adore the interior. It has the vibe of an Audi A6, but less pretentious, and certainly less confusing. It’s elegant, but understated; with plenty of tech at your disposal. But most things like drive mode selection require just a push of a button, no menu searching; though you can jump in there and configure multiple things to your liking if you so choose.

Premium trims get VW’s digital cockpit; it’s like a high-def version of traditional gauges, delivering a wealth of info in an easy to read manner.

While comfortable, seats are Euro-firm, with a sporty nature more than all-out extravagance. The rear seats are easier to access than the CC, and room is quite good even for 6-footers.

Like most hatchbacks, rear visibility is somewhat compromised, but the switch from 4 to 5-door does mean more room for cargo. The previous 13.2 cubic-ft. of trunk space has been replaced by 27.2 cubic-ft., expanding to 55.0 with seatbacks folded. Power operated hatch is only available in top SEL Premium trim. 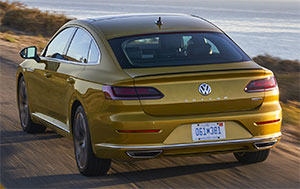 Arteon ride quality is clearly above the Passat, but not quite up to Audi standards when it comes to noise and harshness; but no doubt this was purposeful on VW’s part.

Comfort mode is recommended unless you’re aggressively attacking some corners, as Sport is a little much to deal with on a daily basis.

With all-wheel-drive, Government Fuel Economy Ratings are 20-City, 27-Highway, and 23-Combined; our average, a fine 24.1 miles-per-gallon of Premium fuel. That puts the Energy Impact Score right about average, burning 14.3-barrels of oil annually, with 6.5-tons of CO2 emitted.

The Arteon comes in familiar VW trims; SE and SEL, with sporty R-Line and Premium add-ons. The base front-wheel-drive SE starts things off at $36,840; while a top SEL Premium 4Motion starts at just $45,940.

It’s really too bad that people only seem interested in SUVs these days, as Volkswagen has delivered an amazing “car” experience for a moderate amount of money. Hopefully for them, enough people will be wise enough to switch hats; as the 2019 Arteon is an excellent and perfectly modern European luxury car, for an Asian luxury car budget.